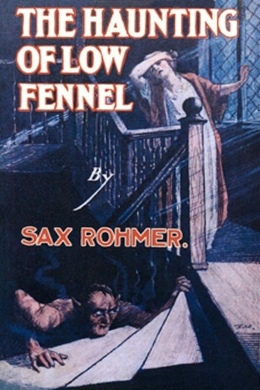 The Haunting of Low Fennel

Include the short stories; The Haunting of Low Fennel, The Valley of the Just, The Blue Monkey, The Riddle of Ragstaff, The Master of Hollow Grange, The Curse of a Thousand Kisses, and The Turquoise Necklace.

We pulled up short on the brow of the hill. Before me lay a little valley carpeted with heather, purple slopes hemming it in. A group of four tall firs guarded the house, which was couched in the hollow of the dip–a low, rambling building, in parts showing evidence of great age and in other parts of the modern improver.

“That’s the new wing,” continued the Major, raising his stick; “projecting out this way. It’s the only addition I’ve made to the house, which, as it stood, had insufficient accommodation for the servants.”

“It is a quaint old place.”

“It is, and I’m loath to part with it, especially as it means a big loss.”

“Ah! Have you formed any theories since wiring me?”

“None whatever. I’ve always been a sceptic, Addison, but if Low Fennel is not haunted, I’m a Dutchman, by the Lord Harry!”

I laughed reassuringly, and the two of us descended the slope to the white gate giving access to a trim gravel path flanked by standard roses. Mrs. Dale greeted us at the door. She was, as I had heard, much younger than the Major, and a distinctly pretty woman. In so far Dame Rumour was confirmed; other things I had heard of her, but I was not yet in a position to pass judgment.

She greeted me cordially enough, although women are usually natural actresses. I thought that she did not suspect the real object of my visit. Tea was served in a delightful little drawing-room which bore evidence of having but recently left the hands of London decorators, but when presently I found myself alone with my host in the Major’s peculiar sanctum, the real business afoot monopolised our conversation.

The room which Major Dale had appropriated as a study was on the ground floor of the new wing–the wing which he himself had had built on to Low Fennel. In regard to its outlook it was a charming apartment enough, with roses growing right up to the open window, so that their perfume filled the place, and beyond, a prospect of purple heather slopes and fir-clad hills.

Sporting prints decorated the walls, and the library was entirely, or almost entirely, made up of works on riding, hunting, shooting, racing, and golf, with a sprinkling of Whyte-Melville and Nat Gould novels and a Murray handbook or two. It was a most cosy room, probably because it was so untidy, or, as Mrs. Dale phrased it, “so manny.”

On a side table was ranked enough liquid refreshment to have inebriated a regiment, and, in one corner, cigar-boxes and tobacco-tins were stacked from the floor some two feet up against the wall. We were soon comfortably ensconced, then, the Major on a hard leather couch, and I in a deep saddle-bag chair.

“It’s an awkward sort of thing to explain,” began Dale, puffing away at a cigar and staring through the open window; “because, if you’re to do anything, you will want full particulars.”

“Well,” the Major continued, “you’ve heard how that blackguard Ellis let me down over those shares? The result?–I had to sell the Hall–Fennel Hall, where a Dale has been since the time of Elizabeth! But still, never mind! that’s not the story. This place, Low Fennel, is really part of the estate, and I have leased it from Meyers, who has bought the Hall. It was formerly the home farm, but since my father’s time it has not been used for that purpose. The New Farm is over the brow of the hill there, on the other side of the high road; my father built it.”

“Well,”–Dale shifted uneasily and a look of perplexity crossed his jolly, red face–“there were stories–uncomfortable stories. To cut a long story short, Seager–a man named Seager, who occupied it at the time I was at Sandhurst–was found dead here, or something; I never was clear as to the particulars, but there was an inquiry and a lot of fuss, and, in short, no one would occupy the property. Therefore the governor built the New Farm.”

“Low Fennel has been empty for many years then?”

“No, sir; only for one. Ord, the head gardener at the Hall, lived here up till last September. The old story about Seager was dying out, you see; but Ord must have got to hear about it–or I’ve always supposed so. At any rate, in September–a dam’ hot September, too, almost if not quite as hot as this–Ord declined to live here any longer.”

“He told me a cock-and-bull story about his wife having seen a horrible-looking man with a contorted face peering in at her bedroom window! I questioned the woman, of course, and she swore to it.”

He mopped his heated brow excitedly, and burnt several matches before he succeeded in relighting his cigar.