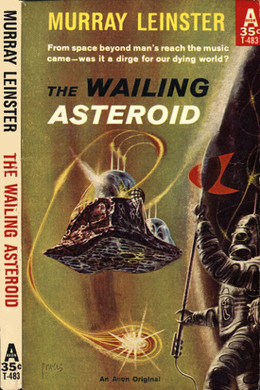 There was no life on the asteroid, but the miles of rock-hewn corridors through which the earth party wandered left no doubt about the purpose of the asteroid. It was a mighty fortress, stocked with weapons of destruction beyond man’s power to understand. And yet there was no life here, nor had there been for untold centuries. What race had built this stronghold? What unimaginable power were they defending against? Why was it abandoned? There was no answer, all was dead.

But–not quite all. For in a room above the tomb-like fortress a powerful transmitter beamed its birdlike, fluting sounds toward earth. Near it, on a huge star-map of the universe, with light-years measured by inches, ten tiny red sparks were moving, crawling inexorably toward the center.

Moving, at many times the speed of light, with the acquired mass of suns … moving, on a course that would pass through the solar system. The unknown aliens would not even see our sun explode from the force of their passing, would not even notice the tiny speck called Earth as it died….

The signals from space began a little after midnight, local time, on a Friday. They were first picked up in the South Pacific, just westward of the International Date Line. A satellite-watching station on an island named Kalua was the first to receive them, though nobody heard the first four or five minutes. But it is certain that the very first message was picked up and recorded by the monitor instruments.

The satellite-tracking unit on Kalua was practically a duplicate of all its fellows. There was the station itself with a vertical antenna outside pointing at the stars. There were various lateral antennae held two feet above ground by concrete posts. In the instrument room in the building a light burned over a desk, three or four monitor lights glowed dimly to indicate that the self-recording instruments were properly operating, and there was a multiple-channel tape recorder built into the wall. Its twin tape reels turned sedately, winding a brown plastic ribbon from one to the other at a moderate pace.

The staff man on duty had gone to the installation’s kitchen for a cup of coffee. No sound originated in the room, unless one counted the fluttering of a piece of weighted-down paper on the desk. Outside, palm trees whispered and rustled their long fronds in the southeast trade wind under a sky full of glittering stars. Beyond, there was the dull booming of surf upon the barrier reef of the island. But the instruments made no sound. Only the tape reels moved.

The signals began abruptly. They came out of a speaker and were instantly recorded. They were elfin and flutelike and musical. They were crisp and distinct. They did not form a melody, but nearly all the components of melody were there. Pure musical notes, each with its own pitch, all of different lengths, like quarter-notes and eighth-notes in music. The sounds needed only rhythm and arrangement to form a plaintive tune.

Nothing happened. The sounds continued for something over a minute. They stopped long enough to seem to have ended. Then they began again.

When the staff man came back into the room with a coffee cup in his hand, he heard the flutings instantly. His jaw dropped. He said, “What the hell?” and went to look at the instruments. He spilled some of his coffee when he saw their readings.

The tracking dials said that the signals came from a stationary source almost directly overhead. If they were from a stationary source, no plane was transmitting them. Nor could they be coming from an artificial satellite. A plane would move at a moderate pace across the sky. A satellite would move faster. Much faster. This source, according to the instruments, did not move at all.

The staff man listened with a blank expression on his face. There was but one rational explanation, which he did not credit for an instant. The reasonable answer would have been that somebody, somewhere, had put a satellite out into an orbit requiring twenty-four hours for a circuit of the earth, instead of the ninety to one-hundred-twenty-four-minute orbits of the satellites known to sweep around the world from west to east and pole to pole. But the piping, musical sounds were not the sort of thing that modern physicists would have contrived to carry information about cosmic-particle frequency, space temperature, micrometeorites, and the like.

The signals stopped again, and again resumed. The staff man was galvanized into activity. He rushed to waken other members of the outpost. When he got back, the signals continued for a minute and stopped altogether. But they were recorded on tape, with the instrument readings that had been made during their duration. The staff man played the tape back for his companions.

They felt as he did. These were signals from space where man had never been. They had listened to the first message ever to reach mankind from the illimitable emptiness between the stars and planets. Man was not alone. Man was no longer isolated. Man….

The staff of the tracking station was very much upset. Most of the men were white-faced by the time the taped message had been re-played through to its end. They were frightened.

Considering everything, they had every reason to be.

The second pick-up was in Darjeeling, in northern India. The Indian government was then passing through one of its periods of enthusiastic interest in science. It had set up a satellite-observation post in a former British cavalry stable on the outskirts of the town. The acting head of the observing staff happened to hear the second broadcast to reach Earth. It arrived some seventy-nine minutes after the first reception, and it was picked up by two stations, Kalua and Darjeeling.