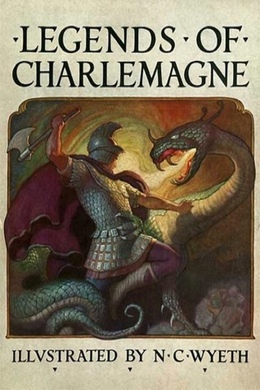 Romance of the Middle Ages

Travel back in time with this collection of fables and legends set in medieval France. Famed folklorist Thomas Bulfinch brings together a carefully curated compendium of stories that are sure to delight. A bevy of damsels in distress and courageous knights populate these pages in tales that veer from action-adventure to romance and back again.

The twelve most illustrious knights of Charlemagne were called Peers, for the equality that reigned among them; while the name of Paladins, also conferred on them, implies that they were inmates of the palace and companions of the king. Their names are always given alike by the romancers, yet we may enumerate the most distinguished of them as follows: Orlando or Roland (the former the Italian, the latter the French form of the name), favorite nephew of Charlemagne; Rinaldo of Montalban, cousin of Orlando; Namo, Duke of Bavaria; Salomon, king of Brittany; Turpin, the Archbishop; Astolpho, of England; Ogier, the Dane; Malagigi, the Enchanter; and Florismart, the friend of Orlando. There were others who are sometimes named as paladins, and the number cannot be strictly limited to twelve. Charlemagne himself must be counted one, and Ganelon, or Gano, of Mayence, the treacherous enemy of all the rest, was rated high on the list by his deluded sovereign, who was completely the victim of his arts.

We shall introduce more particularly to our readers a few of the principal peers, leaving the others to make their own introduction as they appear in the course of our narrative. We begin with Orlando.

Milon, or Milone, a knight of great family, and distantly related to Charlemagne, having secretly married Bertha, the Emperor’s sister, was banished from France, and excommunicated by the Pope. After a long and miserable wandering on foot as mendicants Milon and his wife arrived at Sutri, in Italy, where they took refuge in a cave, and in that cave Orlando was born. There his mother continued, deriving a scanty support from the compassion of the neighboring peasants; while Milon, in quest of honor and fortune, went into foreign lands. Orlando grew up among the children of the peasantry, surpassing them all in strength and manly graces. Among his companions in age, though in station far more elevated, was Oliver, son of the governor of the town. Between the two boys a feud arose that led to a fight, in which Orlando thrashed his rival; but this did not prevent a friendship springing up between the two, which lasted through life.

Orlando was so poor that he was sometimes half naked. As he was a favorite of the boys, one day four of them brought some cloth to make him clothes. Two brought white and two red; and from this circumstance Orlando took his coat-of-arms, or quarterings.

When Charlemagne was on his way to Rome to receive the imperial crown he dined in public in Sutri. Orlando and his mother that day had nothing to eat, and Orlando coming suddenly upon the royal party, and seeing abundance of provisions, seized from the attendants as much as he could carry off, and made good his retreat in spite of their resistance. The Emperor, being told of this incident, was reminded of an intimation he had received in a dream, and ordered the boy to be followed. This was done by three of the knights, whom Orlando would have encountered with a cudgel on their entering the grotto, had not his mother restrained him. When they heard from her who she was they threw themselves at her feet, and promised to obtain her pardon from the Emperor. This was easily effected. Orlando was received into favor by the Emperor, returned with him to France, and so distinguished himself that he became the most powerful support of the throne and of Christianity.