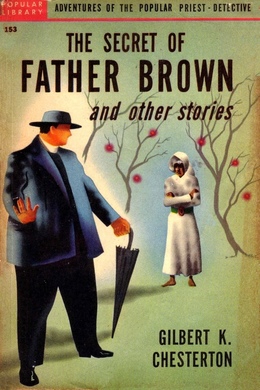 The Secret of Father Brown

Easily the darkest of Chesterton’s Father Brown collections, it is nonetheless a masterwork of perception of the human condition, explored through the usual impossible crimes and a parade of rogues and saints–a corpse in shining armor, a thieving mystic, insouciant British aristocrats, and a Canadian journalist. We are asked to solve death by duel and pistol shot, and thefts of jewels large and small. The stories in this collection are worth reading over and over–to see how the plot unfolds, and to enjoy Chesterton’s gorgeous and well-informed prose. Includes the title story, The Secret of Father Brown, along with, The Mirror of the Magistrate, The Man with Two Beards, The Song of the Flying Fish, The Actor and the Alibi, The Vanishing of Vaudrey, The Worst Crime in the World, The Red Moon of Meru, and The Chief Mourner of Marne.

James Bagshaw and Wilfred Underhill were old friends, and were fond of rambling through the streets at night, talking interminably as they turned corner after corner in the silent and seemingly lifeless labyrinth of the large suburb in which they lived. The former, a big, dark, good-humoured man with a strip of black moustache, was a professional police detective; the latter a sharp-faced, sensitive-looking gentleman with light hair, was an amateur interested in detection. It will come as a shock to the readers of the best scientific romance to learn that it was the policeman who was talking and the amateur who was listening, even with a certain respect.

“Ours is the only trade,” said Bagshaw, “in which the professional is always supposed to be wrong. After all, people don’t write stories in which hairdressers can’t cut hair and have to be helped by a customer; or in which a cabman can’t drive a cab until his fare explains to him the philosophy of cab-driving. For all that, I’d never deny that we often tend to get into a rut: or, in other words, have the disadvantages of going by a rule. Where the romancers are wrong is, that they don’t allow us even the advantages of going by a rule.”

“Surely,” said Underhill, “Sherlock Holmes would say that he went by a logical rule.”

“He may be right,” answered the other; “but I mean a collective rule. It’s like the staff work of an army. We pool our information.”

“And you don’t think detective stories allow for that?” asked his friend.

“Well, let’s take any imaginary case of Sherlock Holmes, and Lestrade, the official detective. Sherlock Holmes, let us say, can guess that a total stranger crossing the street is a foreigner, merely because he seems to look for the traffic to go to the right instead of the left. I’m quite ready to admit Holmes might guess that. I’m quite sure Lestrade wouldn’t guess anything of the kind. But what they leave out is the fact that the policeman, who couldn’t guess, might very probably know. Lestrade might know the man was a foreigner merely because his department has to keep an eye on all foreigners; some would say on all natives, too. As a policeman I’m glad the police know so much; for every man wants to do his own job well. But as a citizen, I sometimes wonder whether they don’t know too much.”

“I should if he was the householder,” answered Bagshaw. “That house is rented by a literary man of Anglo-Roumanian extraction, who generally lives in Paris, but is over here in connexion with some poetical play of his. His name’s Osric Orm, one of the new poets, and pretty steep to read, I believe.”

“But I mean all the people down the road,” said his companion. “I was thinking how strange and new and nameless everything looks, with these high blank walls and these houses lost in large gardens. You can’t know all of them.”

“I know a few,” answered Bagshaw. “This garden wall we’re walking under is at the end of the grounds of Sir Humphrey Gwynne, better known as Mr. Justice Gwynne, the old judge who made such a row about spying during the war. The house next door to it belongs to a wealthy cigar merchant. He comes from Spanish-America and looks very swarthy and Spanish himself; but he bears the very English name of Buller. The house beyond that–did you hear that noise?”

“I heard something,” said Underhill, “but I really don’t know what it was.”

“I know what it was,” replied the detective, “it was a rather heavy revolver, fired twice, followed by a cry for help. And it came straight out of the back garden of Mr. Justice Gwynne, that paradise of peace and legality.”

He looked up and down the street sharply and then added:

“And the only gate of the back garden is half a mile round on the other side. I wish this wall were a little lower, or I were a little lighter; but it’s got to be tried.”

“It is lower a little farther on,” said Underhill, “and there seems to be a tree that looks helpful.”

They moved hastily along and found a place where the wall seemed to stoop abruptly, almost as if it had half-sunk into the earth; and a garden tree, flamboyant with the gayest garden blossom, straggled out of the dark enclosure and was gilded by the gleam of a solitary street-lamp. Bagshaw caught the crooked branch and threw one leg over the low wall; and the next moment they stood knee-deep amid the snapping plants of a garden border.