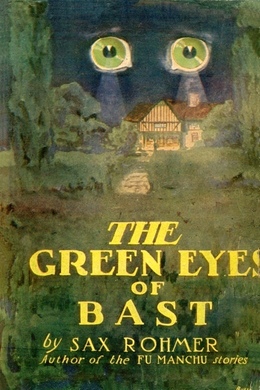 The Green Eyes of Bâst

Psychic investigator Dr. Damar Greefe is strolling home. It’s been a tough day, assisting the police. During this stroll, he feels someone or something watching him – but when he turns to see who it is, he faces only emptiness. Then he sees a cat staring at him, eyes as green as jade. But when he goes to investigate, the cat has disappeared! Then the body of Sir Marcus Coverly is found in a crate headed out to sea. The ensuing investigation leads Dr. Greefe deeper into Egypt’s mysteries. And into – the Green Eyes of Bast!

“Very much so, sergeant,” I replied. “I think I will step into your hut for a moment and light my pipe if I may.”

“Certainly, sir. Matches are too scarce nowadays to take risks with ‘em. But it looks as if the storm had blown over.”

“I’m not sorry,” said I, entering the little hut like a sentry-box which stands at the entrance to this old village high street for accommodation of the officer on point duty at that spot. “I have a longish walk before me.”

“Yes. Your place is right off the beat, isn’t it?” mused my acquaintance, as sheltered from the keen wind I began to load my briar. “Very inconvenient I’ve always thought it for a gentleman who gets about as much as you do.”

“That’s why I like it,” I explained. “If I lived anywhere accessible I should never get a moment’s peace, you see. At the same time I have to be within an hour’s journey of Fleet Street.”

I often stopped for a chat at this point and I was acquainted with most of the men of P. division on whom the duty devolved from time to time. It was a lonely spot at night when the residents in the neighborhood had retired, so that the darkened houses seemed to withdraw yet farther into the gardens separating them from the highroad. A relic of the days when trains and motor-buses were not, dusk restored something of an old-world atmosphere to the village street, disguising the red brick and stucco which in many cases had displaced the half-timbered houses of the past. Yet it was possible in still weather to hear the muted bombilation of the sleepless city and when the wind was in the north to count the hammer-strokes of the great bell of St. Paul’s.

Standing in the shelter of the little hut, I listened to the rain dripping from over-reaching branches and to the gurgling of a turgid little stream which flowed along the gutter near my feet whilst now and again swift gusts of the expiring tempest would set tossing the branches of the trees which lined the way.

I nodded, being in the act of lighting my pipe. The storm had interrupted a spell of that tropical weather which sometimes in July and August brings the breath of Africa to London, and this coolness resulting from the storm was very welcome. Then:

“Well, good night,” I said, and was about to pursue my way when the telephone bell in the police-hut rang sharply.

I paused, idly curious concerning the message, and:

“The Red House,” continued the sergeant, “in College Road? Yes, I know it. It’s on Bolton’s beat, and he is due here now. Very good; I’ll tell him.”

He hung up the receiver and, turning to me, smiled and nodded his head resignedly.

“The police get some funny jobs, sir,” he confided. “Only last night a gentleman rang up the station and asked them to tell me to stop a short, stout lady with yellow hair and a big blue hat (that was the only description) as she passed this point and to inform her that her husband had had to go out but that he had left the door-key just inside the dog-kennel!”

“Now to-night,” he resumed, “here’s somebody just rung up to say that he thinks, only thinks, mind you, that he has forgotten to lock his garage and will the constable on that beat see if the keys have been left behind. If so, will he lock the door from the inside, go out through the back, lock that door and leave the keys at the station on coming off duty!”

“Yes,” I said. “There are some absent-minded people in the world. But do you mean the Red House in College Road?”

“That’s it,” replied the sergeant, stepping out of the hut and looking intently to the left.

He referred to a stolid, red-faced constable who at that moment came plodding across the muddy road, and:

“A job for you, Bolton,” he cried. “Listen. You know the Red House in College Road?”

Bolton removed his helmet and scratched his closely-cropped head.

“No, no,” I interrupted. “It is a house about half-way down on the left; very secluded, with a high brick wall in front.”

“Oh! You mean the empty house?” inquired the constable.

“Just what I was about to remark, sergeant,” said I, turning to my acquaintance. “To the best of my knowledge the Red House has been vacant for twelve months or more.”

“Has it?” exclaimed the sergeant. “That’s funny. Still, it’s none of my business; besides it may have been let within the last few days. Anyway, listen, Bolton. You are to see if the garage is unlocked. If it is and the keys are there, go in and lock the door behind you. There’s another door at the other end; go out and lock that too. Leave the keys at the depôt when you go off. Got that fixed?”

“Yes,” replied Bolton, and he stood helmet in hand, half inaudibly muttering the sergeant’s instructions, evidently with the idea of impressing them upon his memory.