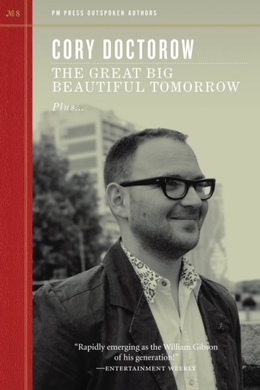 In a Disney-dominated future, a transhuman teenager engages in high velocity adventures until he meets the meat girl of his dreams and is forced to choose between immortality and sex in one of Cory Doctorow’s most daring novellas. Also included in this collection is Creativity vs. Copyright, a transcript of Doctorow’s historic address to the 2010 World Science Fiction Convention, dramatically presenting his controversial case for open-source models not only in information but art as well, and Outspoken Interview, in which Doctorow reveals the surprising inspirations for his writing.

I piloted the mecha through the streets of Detroit, hunting wumpuses. The mecha was a relic of the Mecha Wars, when the nation tore itself to shreds with lethal robots, and it had the weird, swirling lines of all evolutionary tech, channeled and chopped and counterweighted like some freak dinosaur or a racecar.

I loved the mecha. It wasn’t fast, but it had a fantastic ride, a kind of wobbly strut that was surprisingly comfortable and let me keep the big fore and aft guns on any target I chose, the sights gliding along on a perfect level even as the neck rocked from side to side.

The pack loved the mecha too. All six of them, three aerial bots shaped like bats, two ground-cover streaks that nipped around my heels, and a flea that bounded over buildings, bouncing off the walls and leaping from monorail track to rusting hover-bus to balcony and back. The pack’s brains were back in Dad’s house, in the old Comerica Park site. When I found them, they’d been a pack of sick dogs, dragging themselves through the ruined city, poisoned by some old materiel. I had done them the mercy of extracting their brains and connecting them up to the house network. Now they were immortal, just like me, and they knew that I was their alpha dog. They loved to go for walks with me.

I spotted the wumpus by the plume of dust it kicked up. It was well inside the perimeter, gnawing at the corner of an old satellite Ford factory, a building gone to magnificent ruin, all crumbled walls and crazy, unsprung machines. The structural pillars stuck up all around it, like columns around a Greek temple.

The wumpus had the classic look. It stood about eight feet tall, with a hundred mouths on the ends of whipping tentacles. Its metallic finish was smeared with oily rainbows that wobbled as the dust swirled around it. The mouths whipped back and forth against the corner of the factory, taking chunks out of it. The chunks went into the hopper on its back and were broken up into their constituent atoms, reassembled into handy, safe, rich soil, and then ejected in a vertical plume that was visible even from several blocks away.

Wumpuses don’t put up much fight. They’re reclamation drones, not hunter-killer bots, and their main mode of attack was to assemble copies of themselves out of dead buildings faster than I could squash them. They weren’t much sport, but that was OK: there’s no way Dad would let me put his precious mecha at risk against any kind of big game. The pack loved hunting wumpus, anyway.

The air-drones swooped around it in tight arcs. They were usually piloted by Pepe, the hysterical chihuahua, who loved to have three points-of-view, it fit right in with his distracted, hyperactive approach to life. The wumpus didn’t even notice the drones until one of them came in so low that it tore through the tentacles, taking three clean off and disordering the remainder. The other air-drones did victory loops in the sky overhead, and the flea bounded so high that it practically disappeared from sight, then touched down right next to the wumpus.

This attack was characteristic of Gretl, the Irish Setter mix who thought she was a kangaroo. The whole pack liked the flea, but Gretl was born to it. She bounced the wumpus six times, knocking it back and forth like an air-hockey puck, leaping free before it could bring its tentacles to bear on her.

The ground-effect bots reached the wumpus at the same time as I did. Technically, I was supposed to hang back out of range and get it with the mecha’s big guns, to make sure that it didn’t get a bite or two in on the mecha’s skin, scratching the finish. But that was no fun at all. I liked to dance with the wumpus, especially when the pack was in on it, all of us dodging in and out, snatching the wumpus’s tentacles, kicking it back and forth. The ground-effect bots were clearly piloted by Ike and Mike, two dogs that had been so badly mutilated when I found them that I couldn’t even guess at their breed. They must have been big beasts at one point. They were born to ground-effect bots, anyway, bulling the wumpus around.

The wumpus was down to just a few tentacles now, and I could see into its hopper, normally obscured by the forest of waving arms and mouths. The hopper itself was lined with tentacles, but thin ones, whiplike, each one fringed with hairy cilia. The cilia branched and branched again, down to single-molecule pincers, each one optimized to break apart a different kind of material. I knew better than to reach inside that hopper with the mecha’s fists—even after I’d killed the wumpus, the hopper would digest anything I fed it, including me.