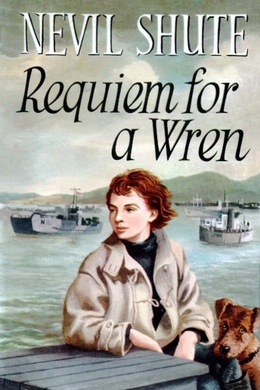 Requiem For A Wren

Sidelined by a wartime injury, fighter pilot Alan Duncan reluctantly returns to his parents’ remote sheep station in Australia to take the place of his brother Bill, who died a hero in the war. But his homecoming is marred by the suicide of his parents’ parlormaid, of whom they were very fond. Alan soon realizes that the dead young woman is not the person she pretended to be. Upon discovering that she had served in the Royal Navy and participated along with his brother in the secret build-up to the Normandy invasion, Alan sets out to piece together the tragic events and the lonely burden of guilt that unravelled one woman’s life. In the process of finding the answer to the mystery, he realizes how much he had in common with this woman he never knew and how a war can go on killing people long after it’s all over.

There was a layer of cumulus, about seven-tenths, with tops at about five thousand feet as we came to Essendon airport; we broke out of it at two thousand and we were on the circuit downwind, with the aerodrome on our starboard wing. I sat with my eyes glued to the window looking out at Melbourne, because this was my home town and I had been away five years. The hostess touched me on the arm and drew my attention from the scene, and told me to fasten my safety belt. I had not seen the sign light up.

She smiled, and then she said quietly, “Would you like any help down the gangway, sir?”

I shook my head. “I’ll wait till the others are all off. I’m all right if I take my time.”

She nodded and moved on, courteous and efficient. I wondered how she knew that going downstairs was the tricky part; perhaps that was a feature of her training, or perhaps the hostesses on the machine from San Francisco had told her about me at Sydney. I turned back to the window to watch the approach to the runway and the landing, and I remained absorbed in the techniques till the machine came to a standstill at the terminal building and the engines came to rest.

While the other passengers got off I sat at the window trying to see who was there to meet me. It was likely to be my father. I hadn’t given them much notice for I had only telegraphed the time of my arrival from Sydney when I landed there the previous evening and it was barely two o’clock now; moreover they weren’t expecting me for another four days and we live a hundred and twenty miles from the airport. The wing hid a good part of the enclosure but I saw nobody I knew. I wondered if I should have to go in to town to the Club and telephone home from there.

I followed the last passenger down the aisle to the door, and thanked the hostesses as I passed them. I made slow time down the steps but once on the flat I was all right, of course, and walked over to the enclosure. Then I caught sight of a face I knew. It was Harry Drew, our foreman, come to meet me. It was a warm, summery spring day and Harry was very smart. He is a man about forty years old, with dark, curly hair and a youthful figure. He was wearing an opulent-looking American shirt without a jacket on that warm day, a brown shirt buttoned to the neck and worn without a tie; his brown-green grazier’s trousers were clean and newly creased and held up with a brand-new embossed belt with a large, shiny buckle. He caught my eye and half raised his hand in salutation.

I passed through the gate and he came to meet me. “Morning, Harry,” I said. “How are you today?”

“Good, Mr. Duncan,” he replied. “We didn’t expect you till Friday.” He took the overnight bag from me.

“I came along a bit quicker than I thought I would,” I said.

He was clearly puzzled, as they all must have been by my telegram. “Did you come on a different ship?” he asked. “We thought you’d be flying from Fremantle, arriving Saturday morning.”

“I didn’t come that way,” I said. “I had to stay in London a bit longer. I flew all the way, through New York and San Francisco to Sydney.”

“Come the other way round?”

“That’s right,” I said. We passed into the airport building. “How’s my mother, Harry? She’s not here, is she?”

“She didn’t come,” he said. “She gets out most fine days, but sitting in the chair most of the time, you know. She don’t go away much now. Three months or more since she went down to Melbourne.” He paused by the newspaper stand. “The colonel, he was coming down to meet you, but we had a bit of trouble.”

“What sort of trouble?” I enquired.

“The house parlourmaid,” he said. “Seems like she committed suicide or something. Anyway, she’s dead.”

I stared at him. “For God’s sake! How did that happen?”

“I don’t really know,” he said. “It only happened this morning, and I left about half past ten to get down here to meet you. She took tablets or something, what they give you to make you sleep.”

“She did it last night?”

“That’s right. She was dead. The colonel rang through for me to go up to the house, ’n soon after I got there Dr. Stanley, he arrived. I suppose the colonel telephoned for him. But there wasn’t anything that he could do; she was dead all right. So then they got on to the police, and just about then your telegram came from Sydney saying you’d be coming in today. The colonel, he couldn’t leave home with all that going on to come down here to meet you, so he said to me to take the Jaguar and come instead.”