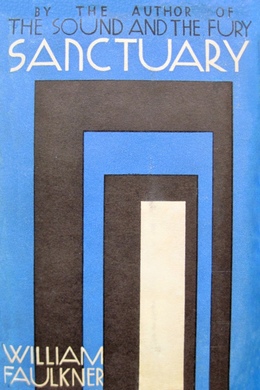 Psychologically astute and wonderfully poetic, Sanctuary is a powerful novel examining the nature of true evil, through the prisms of mythology, local lore, and hard-boiled detective fiction. This is the dark, at times brutal, story of the kidnapping of Mississippi debutante Temple Drake, who introduces her own form of venality into the Memphis underworld where she is being held.

The spring welled up at the root of a beech tree and flowed away upon a bottom of whorled and waved sand. It was surrounded by a thick growth of cane and brier, of cypress and gum in which broken sunlight lay sourceless. Somewhere, hidden and secret yet nearby, a bird sang three notes and ceased.

In the spring the drinking man leaned his face to the broken and myriad reflection of his own drinking. When he rose up he saw among them the shattered reflection of Popeye’s straw hat, though he had heard no sound.

He saw, facing him across the spring, a man of under size, his hands in his coat pockets, a cigarette slanted from his chin. His suit was black, with a tight, high-waisted coat. His trousers were rolled once and caked with mud above mud-caked shoes. His face had a queer, bloodless color, as though seen by electric light; against the sunny silence, in his slanted straw hat and his slightly akimbo arms, he had that vicious depthless quality of stamped tin.

Behind him the bird sang again, three bars in monotonous repetition: a sound meaningless and profound out of a suspirant and peaceful following silence which seemed to isolate the spot, and out of which a moment later came the sound of an automobile passing along a road and dying away.

The drinking man knelt beside the spring. “You’ve got a pistol in that pocket, I suppose,” he said.

Across the spring Popeye appeared to contemplate him with two knobs of soft black rubber. “I’m asking you,” Popeye said. “What’s that in your pocket?”

The other man’s coat was still across his arm. He lifted his other hand toward the coat, out of one pocket of which protruded a crushed felt hat, from the other a book. “Which pocket?” he said.

The other man stopped his hand. “It’s a book.”

“Just a book. The kind that people read. Some people do.”

“Do you read books?” Popeye said.

The other man’s hand was frozen above the coat. Across the spring they looked at one another. The cigarette wreathed its faint plume across Popeye’s face, one side of his face squinted against the smoke like a mask carved into two simultaneous expressions.

From his hip pocket Popeye took a soiled handkerchief and spread it upon his heels. Then he squatted, facing the man across the spring. That was about four oclock on an afternoon in May. They squatted so, facing one another across the spring, for two hours. Now and then the bird sang back in the swamp, as though it were worked by a clock; twice more invisible automobiles passed along the highroad and died away. Again the bird sang.

“And of course you dont know the name of it,” the man across the spring said. “I dont suppose you’d know a bird at all, without it was singing in a cage in a hotel lounge, or cost four dollars on a plate.” Popeye said nothing. He squatted in his tight black suit, his right-hand coat pocket sagging compactly against his flank, twisting and pinching cigarettes in his little, doll-like hands, spitting into the spring. His skin had a dead, dark pallor. His nose was faintly aquiline, and he had no chin at all. His face just went away, like the face of a wax doll set too near a hot fire and forgotten. Across his vest ran a platinum chain like a spider web. “Look here,” the other man said. “My name is Horace Benbow. I’m a lawyer in Kinston. I used to live in Jefferson yonder; I’m on my way there now. Anybody in this county can tell you I am harmless. If it’s whiskey, I dont care how much you all make or sell or buy. I just stopped here for a drink of water. All I want to do is get to town, to Jefferson.”

Popeye’s eyes looked like rubber knobs, like they’d give to the touch and then recover with the whorled smudge of the thumb on them.

“I want to reach Jefferson before dark,” Benbow said. “You cant keep me here like this.”

Without removing the cigarette Popeye spat past it into the spring.

“You cant stop me like this,” Benbow said. “Suppose I break and run.”

Popeye put his eyes on Benbow, like rubber. “Do you want to run?”

Benbow heard the bird again, trying to recall the local name for it. On the invisible highroad another car passed, died away. Between them and the sound of it the sun was almost gone. From his trousers pocket Popeye took a dollar watch and looked at it and put it back in his pocket, loose like a coin.