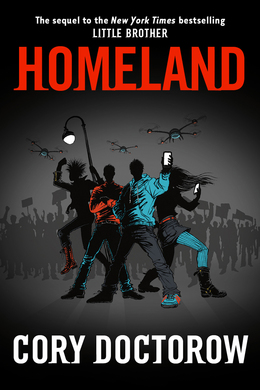 In Doctorow’s wildly successful Little Brother, young Marcus Yallow was arbitrarily detained and brutalized by the government in the wake of a terrorist attack on San Francisco—an experience that led him to become a leader of the whole movement of technologically clued-in teenagers, fighting back against the tyrannical security state.

A few years later, California’s economy collapses, but Marcus’s hacktivist past lands him a job as webmaster for a crusading politician who promises reform. Soon his former nemesis Masha emerges from the political underground to gift him with a thumbdrive containing a Wikileaks-style cable-dump of hard evidence of corporate and governmental perfidy. It’s incendiary stuff—and if Masha goes missing, Marcus is supposed to release it to the world. Then Marcus sees Masha being kidnapped by the same government agents who detained and tortured Marcus years earlier. Marcus can leak the archive Masha gave him—but he can’t admit to being the leaker, because that will cost his employer the election. He’s surrounded by friends who remember what he did a few years ago and regard him as a hacker hero. He can’t even attend a demonstration without being dragged onstage and handed a mike. He’s not at all sure that just dumping the archive onto the Internet, before he’s gone through its millions of words, is the right thing to do. Meanwhile, people are beginning to shadow him, people who look like they’re used to inflicting pain until they get the answers they want. Fast-moving, passionate, and as current as next week, Homeland is every bit the equal of Little Brother—a paean to activism, to courage, to the drive to make the world a better place.

Attending Burning Man made me simultaneously one of the most photographed people on the planet and one of the least surveilled humans in the modern world.

I adjusted my burnoose, covering up my nose and mouth and tucking its edge into place under the lower rim of my big, scratched goggles. The sun was high, the temperature well over a hundred degrees, and breathing through the embroidered cotton scarf made it even more stifling. But the wind had just kicked up, and there was a lot of playa dust – fine gypsum sand, deceptively soft and powdery, but alkali enough to make your eyes burn and your skin crack – and after two days in the desert, I had learned that it was better to be hot than to choke.

Pretty much everyone was holding a camera of some kind – mostly phones, of course, but also big SLRs and even old-fashioned film cameras, including a genuine antique plate camera whose operator hid out from the dust under a huge black cloth that made me hot just to look at it. Everything was ruggedized for the fine, blowing dust, mostly through the simple expedient of sticking it in a zip-lock bag, which is what I’d done with my phone. I turned around slowly to get a panorama and saw that the man walking past me was holding the string for a gigantic helium balloon a hundred yards overhead, from which dangled a digital video camera. Also, the man holding the balloon was naked.

Well, not entirely. He was wearing shoes. I understood that: playa dust is hard on your feet. They call it playa-foot, when the alkali dust dries out your skin so much that it starts to crack and peel. Everyone agrees that playa-foot sucks.

Burning Man is a festival held every Labor Day weekend in the middle of Nevada’s Black Rock desert. Fifty thousand people show up in this incredibly harsh, hot, dusty environment, and build a huge city – Black Rock City – and participate. “Spectator” is a vicious insult in Black Rock City. Everyone’s supposed to be doing stuff and yeah, also admiring everyone else’s stuff (hence all the cameras). At Burning Man, everyone is the show.

I wasn’t naked, but the parts of me that were showing were decorated with elaborate mandalas laid on with colored zinc. A lady as old as my mother, wearing a tie-dyed wedding dress, had offered to paint me that morning, and she’d done a great job. That’s another thing about Burning Man: it runs on a gift economy, which means that you generally go around offering nice things to strangers a lot, which makes for a surprisingly pleasant environment. The designs the painter had laid down made me look amazing, and there were plenty of cameras aiming my way as I ambled across the open desert toward Nine O’Clock.

Black Rock City is a pretty modern city: it has public sanitation (portable chem-toilets decorated with raunchy poems reminding you not to put anything but toilet paper in them), electricity and Internet service (at Six O’Clock, the main plaza in the middle of the ring-shaped city), something like a government (the nonprofit that runs Burning Man), several local newspapers (all of them doing better than the newspapers in the real world!), a dozen radio stations, an all-volunteer police force (the Black Rock Rangers, who patrolled wearing tutus or parts of chicken suits or glitter paint), and many other amenities associated with the modern world.

But BRC has no official surveillance. There are no CCTVs, no checkpoints – at least not after the main gate, where tickets are collected – no ID checks at all, no bag-searches, no RFID sniffers, no mobile phone companies logging your movements. There was also no mobile phone service. No one drives – except for the weird art cars registered with the Department of Mutant Vehicles – so there were no license plate cameras and no sniffers for your E-Z Passes. The WiFi was open and unlogged. Attendees at Burning Man agreed not to use their photos commercially without permission, and it was generally considered polite to ask people before taking their portraits.

“Wahoo!” I shouted to the dust and the art cars and the naked people and the enormous wooden splay-armed effigy perched atop a pyramid straight ahead of me in the middle of the desert. This was The Man, and we’d burn him in three nights, and that’s why it was called Burning Man. I couldn’t wait.

“You’re in a good mood,” a jawa said from behind me. Even with the tone-shifter built into its dust-mask, the cloaked sand-person had an awfully familiar voice.