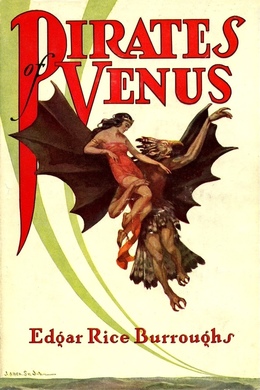 The shimmering, cloud-covered planet of Venus conceals a wondrous secret: the strikingly beautiful yet deadly world of Amtor. In Amtor, cities of immortal beings flourish in giant trees reaching thousands of feet into the sky; ferocious beasts stalk the wilderness below; rare flashes of sunlight precipitate devastating storms; and the inhabitants believe their world is saucer-shaped with a fiery center and an icy rim. Stranded on Amtor after his spaceship crashes, astronaut Carson Napier is swept into a world where revolution is ripe, the love of a princess carries a dear price, and death can come as easily from the blade of a sword as from the ray of a futuristic gun.

“If a female figure in a white shroud enters your bedchamber at midnight on the thirteenth day of this month, answer this letter; otherwise, do not.”

Having read this far in the letter, I was about to consign it to the wastebasket, where all my crank letters go; but for some reason I read on, “If she speaks to you, please remember her words and repeat them to me when you write.” I might have read on to the end; but at this juncture the telephone bell rang, and I dropped the letter into one of the baskets on my desk. It chanced to be the “out” basket; and had events followed their ordinary course, this would have been the last of the letter and the incident in so far as I was concerned, for from the “out” basket the letter went to the files.

It was Jason Gridley on the telephone. He seemed excited and asked me to come to his laboratory at once. As Jason is seldom excited about anything, I hastened to accede to his request and satisfy my curiosity. Jumping into my roadster, I soon covered the few blocks that separate us, to learn that Jason had good grounds for excitement. He had just received a radio message from the inner world, from Pellucidar.

On the eve of the departure of the great dirigible, O-220, from the earth’s core, following the successful termination of that historic expedition, Jason had determined to remain and search for von Horst, the only missing member of the party; but Tarzan, David Innes, and Captain Zuppner had persuaded him of the folly of such an undertaking, inasmuch as David had promised to dispatch an expedition of his own native Pellucidarian warriors to locate the young German lieutenant if he still lived and it were possible to discover any clue to his whereabouts.

Notwithstanding this, and though he had returned to the outer world with the ship, Jason had always been harassed by a sense of responsibility for the fate of von Horst, a young man who had been most popular with all the members of the expedition; and had insisted time and time again that he regretted having left Pellucidar until he had exhausted every means within his power of rescuing von Horst or learned definitely that he was dead.

Jason waved me to a chair and offered me a cigarette. “I’ve just had a message from Abner Perry,” he announced, “the first for months.”

“It must have been interesting,” I commented, “to excite you.”

“It was,” he admitted. “A rumor has reached Sari that von Horst has been found.”

Now as this pertains to a subject entirely foreign to the present volume, I might mention that I have alluded to it only for the purpose of explaining two facts which, while not vital, have some slight bearing on the remarkable sequence of events which followed. First, it caused me to forget the letter I just mentioned, and, second, it fixed the date in my mind—the tenth.

My principal reason for mentioning the first fact is to stress the thought that the matter of the letter, so quickly and absolutely forgotten, had no opportunity to impress itself upon my mind and therefore could not, at least objectively, influence my consideration of ensuing events. The letter was gone from my mind within five minutes of its reading as completely as though it had never been received.

The next three days were exceedingly busy ones for me, and when I retired on the night of the thirteenth my mind was so filled with the annoying details of a real estate transaction that was going wrong, that it was some time before I could sleep. I can truthfully affirm that my last thoughts were of trust deeds, receivers in equity, and deficiency judgments.

What awoke me, I do not know. I sat up with a start just in time to see a female figure, swathed in what appeared to be a white winding sheet, enter my room through the door. You will note that I say door rather than doorway, for such was the fact; the door was closed. It was a clear, moonlit night; the various homely objects in my room were plainly discernible, especially the ghostly figure now hovering near the foot of my bed.

I am not subject to hallucinations, I had never seen a ghost, I had never wished to, and I was totally ignorant of the ethics governing such a situation. Even had the lady not been so obviously supernatural, I should yet have been at a loss as to how to receive her at this hour in the intimacy of my bedchamber, for no strange lady had ever before invaded its privacy, and I am of Puritan stock.

“It is midnight of the thirteenth,” she said, in a low, musical voice.

“So it is,” I agreed, and then I recalled the letter that I had received on the tenth.

“He left Guadalupe today,” she continued; “he will wait in Guaymas for your letter.”