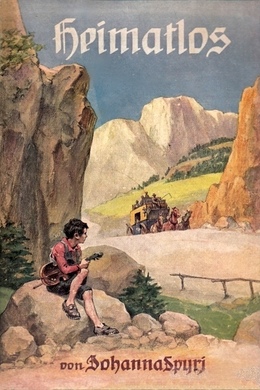 Heimatlos: two stories for children, and for those who love children

Rico was almost nine years old, and had been to school for two winters. Up there in the mountains there was no school in the summer-time; for then the teacher had his field to cultivate, and his hay and wood to cut, like everybody else, and nobody had time to think of going to school. This was not a great sorrow for Rico - he knew how to amuse himself. When he had once taken his place in the morning on the threshold, he would stand there for hours without moving, gazing into the far distance with dreamy eyes, until the door of the house over the way openen, and a little girl make her appearance looked over at him laughingly…

In the Upper Engadine Valley, on the road leading up to the Maloja Pass, lies a lonely town called Sils. Taking a diagonal path from the street back to the mountains, one comes to a smaller village known as Sils-Maria. Here, a little aside from the highway, in a field, two dwellings stood opposite each other. Both had old-fashioned doors and tiny windows set deep in the wall. One house had a garden, where herbs and vegetables and a few straggling flowers were growing. The other, which was much smaller, had only an old stable with a couple of chickens wandering in and out of it.

At the same hour every morning there came out of this forlorn little house a man who was so tall that he had to stoop in order to pass through the doorway. His hair and eyes were very dark, and the lower part of his face was hidden by a heavy black beard. Familiar as this man’s figure was to the people of Sils, they always spoke of him as “the Italian.” His work took him regularly up the Maloja, where the roads were being improved, or down the Pass to St. Moritz Bath, where some new houses were going up.

Each morning a boy followed the man to the door and stood looking wistfully after him. It would have been hard to say just what those great dark eyes were fixed upon, their gaze seemed so far reaching.

Sunday afternoons, when the weather was favorable, the father and son would go for a walk together. So striking was the likeness between them that no one could help noticing it, although in the bearded face of the man the sadness was less apparent. They seldom spoke, but sometimes the man would hum or whistle a tune, and then the boy would listen eagerly. It was easy to see that music was their chief pleasure. When they were kept in the house by bad weather, the father would play familiar airs on a mouth organ or on a whistle that he had made himself–perhaps on a comb or even on a leaf from a tree. Once he brought home a violin, which delighted the boy beyond measure. He watched the father intently as he played, and later tried to bring out the same notes himself. He must have succeeded fairly well, for the man laughed, and laying his own fingers over the little ones, played several melodies from beginning to end.

The next day, while the father was away, the boy practiced until he succeeded in playing his favorite tune, but after that the violin disappeared and was never brought back again. Sometimes, however, the father would sing in his deep voice,–softly, perhaps, at first, but louder as he caught the spirit of the music. Then the boy would sing, too, and when the words failed him–for the songs were in Italian, which he did not understand–he could still hum the air. There was one tune that he knew better than all the rest, for it was one his father had sung over and over again. It had many verses, and this was the way it began:

Though the music was sad, this song was the boy’s favorite. He would always sing it with much feeling, his clear, bell-like voice blending smoothly with the father’s rich bass. Often when they had finished all the verses, the man would put his hand on his son’s shoulder and say, “Good, Enrico! that went very well.” Only his father called him “Enrico”; to all others he was simply “Rico.”

There was still another person who lived in the little cottage. This was Rico’s aunt, who kept house for the father and himself. In the winter, when she sat spinning beside the stove and it was too stormy to be out of doors, Rico had to be very careful of his behavior. Everything he did seemed to annoy her. The faultfinding made the loneliness still harder to bear when, as often happened, the father’s work kept him away from home for days at a time.

Sometimes when Rico tried to escape from the presence of his aunt, she would say sharply: “Shut the door and sit down, Rico. You are forever letting the cold air into the house.”

He was thankful that his bed upstairs offered a safe retreat after supper; and then he always had the pleasant anticipation that his father would probably soon come home again.