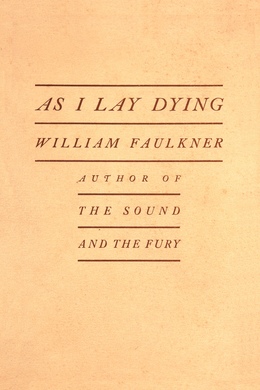 As I Lay Dying

The death and burial of Addie Bundren is told by members of her family, as they cart the coffin to Jefferson, Mississippi, to bury her among her people. And as the intense desires, fears and rivalries of the family are revealed in the vernacular of the Deep South, Faulkner presents a portrait of extraordinary power - as epic as the Old Testament, as American as Huckleberry Finn.

Jewel and I come up from the field, following the path in single file. Although I am fifteen feet ahead of him, anyone watching us from the cotton-house can see Jewel’s frayed and broken straw hat a full head above my own.

The path runs straight as a plumb-line, worn smooth by feet and baked brick-hard by July, between the green rows of laid-by cotton, to the cotton-house in the centre of the field, where it turns and circles the cotton-house at four soft right angles and goes on across the field again, worn so by feet in fading precision.

The cotton-house is of rough logs, from between which the chinking has long fallen. Square, with a broken roof set at a single pitch, it leans in empty and shimmering dilapidation in the sunlight, a single broad window in two opposite walls giving on to the approaches of the path. When we reach it I turn and follow the path which circles the house. Jewel, fifteen feet behind me, looking straight ahead, steps in a single stride through the window. Still staring straight ahead, his pale eyes like wood set into his wooden face, he crosses the floor in four strides with the rigid gravity of a cigar-store Indian dressed in patched overalls and endued with life from the hips down, and steps in a single stride through the opposite window and into the path again just as I come around the corner. In single file and five feet apart and Jewel now in front, we go on up the path toward the foot of the bluff.

Tull’s wagon stands beside the spring, hitched to the rail, the reins wrapped about the seat stanchion. In the wagon-bed are two chairs. Jewel stops at the spring and takes the gourd from the willow branch and drinks. I pass him and mount the path, beginning to hear Cash’s saw.

When I reach the top he has quit sawing. Standing in a litter of chips, he is fitting two of the boards together. Between the shadow spaces they are yellow as gold, like soft gold, bearing on their flanks in smooth undulations the marks of the adze blade: a good carpenter, Cash is. He holds the two planks on the trestle, fitted along the edges in a quarter of the finished box. He kneels and squints along the edge of them, then he lowers them and takes up the adze. A good carpenter. Addie Bundren could not want a better one, a better box to lie in. It will give her confidence and comfort. I go on to the house, followed by the

SO I saved out the eggs and baked yesterday. The cakes turned out right well. We depend a lot on our chickens. They are good layers, what few we have left after the possums and such. Snakes, too, in the summer. A snake will break up a hen-house quicker than anything. So after they were going to cost so much more than Mr. Tull thought, and after I promised that the difference in the number of eggs would make it up, I had to be more careful than ever because it was on my final say-so we took them. We could have stocked cheaper chickens, but I gave my promise as Miss Lawington said when she advised me to get a good breed, because Mr. Tull himself admits that a good breed of cows or hogs pays in the long run. So when we lost so many of them we couldn’t afford to use the eggs ourselves, because I could not have had Mr. Tull chide me when it was on my say-so we took them. So when Miss Lawington told me about the cakes I thought that I could bake them and earn enough at one time to increase the net value of the flock the equivalent of two head. And that by saving the eggs out one at a time, even the eggs wouldn’t be costing anything. And that week they laid so well that I not only saved out enough eggs above what we had engaged to sell, to bake the cakes with, I had saved enough so that the flour and the sugar and the stove wood would not be costing anything. So I baked yesterday, more careful than ever I baked in my life, and the cakes turned out right well. But when we got to town this morning Miss Lawington told me the lady had changed her mind and was not going to have the party after all.

“She ought to taken those cakes anyway,” Kate says.

“She ought to taken them,” Kate says. “But those rich town ladies can change their minds. Poor folks can’t.”

Riches is nothing in the face of the Lord, for He can see into the heart. “Maybe I can sell them at the bazaar Saturday,” I say. They turned out real well.

“You can’t get two dollars a piece for them,” Kate says.