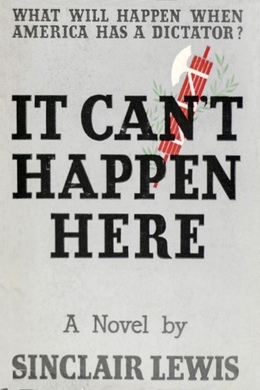 A vain, outlandish, anti-immigrant, fear-mongering demagogue runs for President of the United States - and wins. Lewis’s chilling, and yet prescient bestseller is the story of Buzz Windrip, a ‘Professional Common Man’, who promises the countries poor, angry voters that he will make America great again, but whose actions end up taking the country down a far darker path. As the new regime slides into authoritarianism, newspaper editor Doremus Jessup can’t believe it will last - but is he right? What was once just a cautionary tale of liberal complacency in the face of populist tyranny, shows many signs of coming to pass just a few decades later.

The handsome dining room of the Hotel Wessex, with its gilded plaster shields and the mural depicting the Green Mountains, had been reserved for the Ladies’ Night Dinner of the Fort Beulah Rotary Club.

Here in Vermont the affair was not so picturesque as it might have been on the Western prairies. Oh, it had its points: there was a skit in which Medary Cole (grist mill & feed store) and Louis Rotenstern (custom tailoring—pressing & cleaning) announced that they were those historic Vermonters, Brigham Young and Joseph Smith, and with their jokes about imaginary plural wives they got in ever so many funny digs at the ladies present. But the occasion was essentially serious. All of America was serious now, after the seven years of depression since 1929. It was just long enough after the Great War of 1914-18 for the young people who had been born in 1917 to be ready to go to college … or to another war, almost any old war that might be handy.

The features of this night among the Rotarians were nothing funny, at least not obviously funny, for they were the patriotic addresses of Brigadier General Herbert Y. Edgeways, U.S.A. (ret.), who dealt angrily with the topic “Peace through Defense—Millions for Arms but Not One Cent for Tribute,” and of Mrs. Adelaide Tarr Gimmitch—she who was no more renowned for her gallant anti-suffrage campaigning way back in 1919 than she was for having, during the Great War, kept the American soldiers entirely out of French cafés by the clever trick of sending them ten thousand sets of dominoes.

Nor could any social-minded patriot sneeze at her recent somewhat unappreciated effort to maintain the purity of the American Home by barring from the motion-picture industry all persons, actors or directors or cameramen, who had: (a) ever been divorced; (b) been born in any foreign country—except Great Britain, since Mrs. Gimmitch thought very highly of Queen Mary, or (c) declined to take an oath to revere the Flag, the Constitution, the Bible, and all other peculiarly American institutions.

The Annual Ladies’ Dinner was a most respectable gathering—the flower of Fort Beulah. Most of the ladies and more than half of the gentlemen wore evening clothes, and it was rumored that before the feast the inner circle had had cocktails, privily served in Room 289 of the hotel. The tables, arranged on three sides of a hollow square, were bright with candles, cut-glass dishes of candy and slightly tough almonds, figurines of Mickey Mouse, brass Rotary wheels, and small silk American flags stuck in gilded hard-boiled eggs. On the wall was a banner lettered “Service Before Self,” and the menu—the celery, cream of tomato soup, broiled haddock, chicken croquettes, peas, and tutti-frutti ice-cream—was up to the highest standards of the Hotel Wessex.

They were all listening, agape. General Edgeways was completing his manly yet mystical rhapsody on nationalism:

“…for these U-nited States, a-lone among the great powers, have no desire for foreign conquest. Our highest ambition is to be darned well let alone! Our only gen-uine relationship to Europe is in our arduous task of having to try and educate the crass and ignorant masses that Europe has wished onto us up to something like a semblance of American culture and good manners. But, as I explained to you, we must be prepared to defend our shores against all the alien gangs of international racketeers that call themselves ‘governments,’ and that with such feverish envy are always eyeing our inexhaustible mines, our towering forests, our titanic and luxurious cities, our fair and far-flung fields.

“For the first time in all history, a great nation must go on arming itself more and more, not for conquest—not for jealousy—not for war—but for peace! Pray God it may never be necessary, but if foreign nations don’t sharply heed our warning, there will, as when the proverbial dragon’s teeth were sowed, spring up an armed and fearless warrior upon every square foot of these United States, so arduously cultivated and defended by our pioneer fathers, whose sword-girded images we must be … or we shall perish!”

The applause was cyclonic. “Professor” Emil Staubmeyer, the superintendent of schools, popped up to scream, “Three cheers for the General—hip, hip, hooray!”

All the audience made their faces to shine upon the General and Mr. Staubmeyer—all save a couple of crank pacifist women, and one Doremus Jessup, editor of the Fort Beulah Daily Informer, locally considered “a pretty smart fella but kind of a cynic,” who whispered to his friend the Reverend Mr. Falck, “Our pioneer fathers did rather of a skimpy job in arduously cultivating some of the square feet in Arizona!”