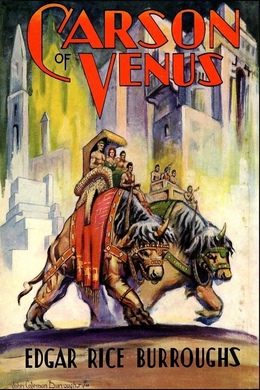 Carson Napier is the first Earthman to visit Venus, and he has to keep alert every moment of his stay in that world of mist and mystery. For its territory is unmapped, its inhabitants strange and he has undertaken to restore a native princess to her lost homeland. In terrible oceans where dreaded sea monsters dwell, in deep forests where fear haunts every branch, and behind the walls of eerie cities where power-mad chieftains plot uncanny schemes, Carson of Venus faces damagers that no man ever faced before.

Everyone who has ever flown will recall the thrill of his first flight over familiar terrain, viewing the old scenes from a new angle that imparted a strangeness and a mystery to them as of a new world; but always there was the comforting knowledge that the airport was not too far away and that even in the event of a forced landing one would know pretty well where he was and how to get home.

But that dawn that Duare and I took off from Havatoo to the accompaniment of the staccato hum of Amtorian rifles, I was actually flying over an unknown world; and there was no landing field and no home. I believe that this was the happiest and most thrilling moment of my life. The woman I love had just told me that she loved me, I was once again at the controls of a ship, I was free, I was flying in safety above the innumerable menaces that haunt the Amtorian scene. Undoubtedly, other dangers lay ahead of us in our seemingly hopeless quest for Vepaja, but for the moment there was nothing to mar our happiness or arouse forebodings. At least, not in me. With Duare it may have been a little different. She may have had forebodings of disaster. It would not be strange if she had, for up until the very instant that we rose to top the walls of Havatoo she had had no conception that there might exist any contrivance in which man might leave the ground and fly through the air. It was naturally something of a shock to her; but she was very brave, and content, too, to accept my word that we were safe.

The ship was a model of perfection, such a ship as will one day be common along the airways of old Earth when science has progressed there as far as it has in Havatoo. Synthetic materials of extreme strength and lightness entered into her construction. The scientists of Havatoo assured me that she would have a life of at least fifty years without overhaul or repairs other than what might be required because of accident. The engine was noiseless and efficient beyond the dreams of Earth men. Fuel for the life of the ship was aboard; and it took up very little space, for it could all be held in the palm of one hand. This apparent miracle is scientifically simple of explanation. Our own scientists are aware of the fact that the energy released by combustion is only an infinitesimal fraction of that which might be generated by the total annihilation of a substance. In the case of coal it is as eighteen thousand millions are to one. The fuel for my engine consists of a substance known as lor, which contains an element called yor-san, as yet unknown to Earth men, and another element, vik-ro, the action of which upon yor-san results in absolute annihilation of the lor.

Insofar as the operation of the ship was concerned, we might have flown on for fifty years, barring adverse weather conditions; but our weakness lay in the fact that we had no provisions. The precipitancy of our departure had precluded any possibility of provisioning the ship. We had escaped with our lives and what we had on, and that was all; but we were very happy. I didn’t want to spoil it by questioning the future. But, really, we had a great many questions to ask of the future; and Duare presently raised one quite innocently enough.

“Where are we going?” she asked.

“But that is the one place you have been longing to go ever since you were kidnaped by the klangan,” I reminded her.

“But not now, Carson. My father, the jong, would have you destroyed. We have spoken of love to one another, and no man may speak of love to the daughter of the jong of Vepaja before she is twenty. You know that well enough.”

“I certainly should,” I teased her; “you have told me often enough.”

“I did it for your own safety, but nevertheless I always liked to hear you say it,” she admitted.

“You are an adept at dissimulation. I thought you hated me; and yet, sometimes I wondered.”

“And because I love you, you must never fall into the hands of my father.”

“But where can we go, Duare? Do you know a single spot in all this world where we should be safe? There is none; and in Vepaja you, at least, will be safe. I shall have to take the chance of winning your father over.”

“It could never be done,” she declared. “The unwritten law that decrees this thing is as old as the ancient empire of Vepaja. You have told me of the gods and goddesses of the religions of your world. In Vepaja the royal family occupies a similar position in the minds and hearts of the people, and this is especially true of the virgin daughter of a jong—she is absolutely sacrosanct. To look at her is an offense; to speak to her is a crime punishable by death.”