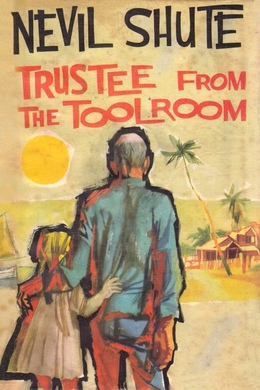 Trustee from the Toolroom

Keith Stewart is an ordinary man. However, one day he is called upon to undertake an extraordinary task. When his sister’s boat is wrecked in the Pacific, he becomes trustee for his little niece. In order to save her from destitution he has to embark on a 2,000 mile voyage in a small yacht in inhospitable waters. His adventures and the colourful characters he meets on his journey make this book a marvellous tale of courage and friendship.

West Ealing is a suburb to the west of London, and Keith Stewart lives there in the lower part of No. 56 Somerset Road. No. 56 is an unusual house and a peculiarly ugly one, a detached house standing in a row but in a fairly spacious garden, four storeys high if you include the basement, a tall, thin slip of a house. It was built in the spacious days of 1880 when West Ealing stood on the edge of the country farmlands and was a place to which Indian Civilians retired after their years of service, but it was built of a particularly ugly yellow brick, now toned to a drab grey, at a period when English suburban architecture was going through a bad patch. The years have not dealt kindly with West Ealing; the farms are now far away. Most of the big old houses have been split up into two or three flats, as Keith Stewart had converted No. 56.

He had bought it when he married Katie in the middle of the Second War. That was soon after he moved down from Glasgow to the London area to work as a toolroom fitter with Stone and Collinson Ltd., who made subcontract parts for aeroplanes at Perivale. It was, of course, the first house that Katie or Keith had ever owned, and they were very proud of it. They contemplated quite a family so that they would need quite a house, the upper rooms for nurseries and children’s rooms and playrooms while the garden would be a nice place for the pram. When, after a few years, it became evident that that was not to be, they had separated the two top floors from the remainder of the house and let them off as what the agents called a maisonette, retaining the ground floor and the basement for themselves. On the ground floor they had a bedroom in the front, the living room and kitchen at the rear overlooking the garden, and a bathroom at the side. In the basement they had adapted what had once been the scullery as a small spare bedroom; the whole of the rest had been taken by Keith as his own domain.

Here he made models, and here he wrote about them weekly for the Miniature Mechanic, a magazine with a considerable circulation in the lower ranks of industry and with a growing popularity amongst eccentric doctors, stockbrokers, and bank managers who just liked engineering but didn’t know much about it. All his life he had made models, little steam engines, little petrol engines, little speedboats, little locomotives, little Diesels. He was a considerable horologist; in his time he had made many clocks with motions of antiquarian interest and had written full directions for constructing them, always in the Miniature Mechanic. He had made little beam engines which would have delighted James Watt and still delighted those who are fascinated by such things; he had made little jet engines which would have delighted Frank Whittle. He had made pumps and boilers and carillons that played a tune, all in the miniature scale. He was a quick worker and a ready writer upon technical matters and he delighted in making little things that worked. He had now so ordered his life that he need do nothing else.

All through the war he had written about his hobby after the long hours of overtime in the toolroom. The coming of peace had given him more leisure for his models and his articles about them, and two years later he had taken the great plunge of giving up his job in favour of his avocation. It had not benefitted him financially. He would have made more money in the toolroom progressing up from charge-hand to foreman; he would have made more money as an instructor in a technical college. He would not have made more happiness than he had now attained.

He was a very serious and well-informed student of engineering matters, though he would have been amazed to hear himself described in such terms. He read about techniques for pleasure. One morning in each week he would spend in the Ealing Public Library browsing through the technical magazines, slightly oppressed by a sense of guilt that he was not working. On Fridays he always went to London to deliver his weekly copy to the editor of the Miniature Mechanic and arrange about the blocks and, being in London, he would take time off and sneak away for three or four hours to the library of the Patent Office for a period of interest and pleasure before going home to catch up with his work. He worked normally till eleven or twelve each night.

He called the front basement room his clean workshop, and this was his machine shop. Here he had a six-inch Herbert lathe for heavy work, a three-and-a-half-inch Myford, and a Boley watchmaker’s lathe. He had a Senior milling machine and a Boxford shaper, a large and a small drill press, and a vast array of tools ready to hand. A long bench ran across the window, a tubular light system ran across the ceiling, and a small camera and flashgun stood ready for use in a cupboard, for it was his habit to take photographs of interesting processes to illustrate his articles.