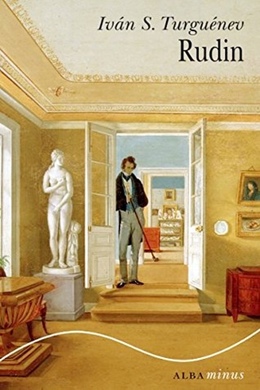 The story of a character typical to Turgenev – a ‘superfluous’ man, weak of will, brimming with indecisive frustration – and yet tormented by ideals. Rudin is made impotent by the dissonance of honoring the older generations while at the same time embracing the new bold epoch of pre-revolutionary Russia. The theme of melancholic powerless men coupled with vital idealistic women is prevalent in Turgenev’s work, and it would be hard to find a clearer study of the type than RUDIN.

It was a quiet summer morning. The sun stood already pretty high in the clear sky but the fields were still sparkling with dew; a fresh breeze blew fragrantly from the scarce awakened valleys and in the forest, still damp and hushed, the birds were merrily carolling their morning song. On the ridge of a swelling upland, which was covered from base to summit with blossoming rye, a little village was to be seen. Along a narrow by-road to this little village a young woman was walking in a white muslin gown, and a round straw hat, with a parasol in her hand. A page boy followed her some distance behind.

She moved without haste and as though she were enjoying the walk. The high nodding rye all round her moved in long softly rustling waves, taking here a shade of silvery green and there a ripple of red; the larks were trilling overhead. The young woman had come from her own estate, which was not more than a mile from the village to which she was turning her steps. Her name was Alexandra Pavlovna Lipin. She was a widow, childless, and fairly well off, and lived with her brother, a retired cavalry officer, Sergei Pavlitch Volintsev. He was unmarried and looked after her property.

Alexandra Pavlovna reached the village and, stopping at the last hut, a very old and low one, she called up the boy and told him to go in and ask after the health of its mistress. He quickly came back accompanied by a decrepit old peasant with a white beard.

‘Well, how is she?’ asked Alexandra Pavlovna.

‘Well, she is still alive,’ began the old man.

Alexandra Pavlovna went into the hut. It was narrow, stifling, and smoky inside. Some one stirred and began to moan on the stove which formed the bed. Alexandra Pavlovna looked round and discerned in the half darkness the yellow wrinkled face of the old woman tied up in a checked handkerchief. Covered to the very throat with a heavy overcoat she was breathing with difficulty, and her wasted hands were twitching.

Alexandra Pavlovna went close up to the old woman and laid her fingers on her forehead; it was burning hot.

‘How do you feel, Matrona?’ she inquired, bending over the bed.

‘Oh, oh!’ groaned the old woman, trying to make her out, ‘bad, very bad, my dear! My last hour has come, my darling!’

‘God is merciful, Matrona; perhaps you will be better soon. Did you take the medicine I sent you?’

The old woman groaned painfully, and did not answer. She had hardly heard the question.

‘She has taken it,’ said the old man who was standing at the door.

Alexandra Pavlovna turned to him.

‘Is there no one with her but you?’ she inquired.

‘There is the girl–her granddaughter, but she always keeps away. She won’t sit with her; she’s such a gad-about. To give the old woman a drink of water is too much trouble for her. And I am old; what use can I be?’

‘Shouldn’t she be taken to me–to the hospital?’

‘Oh!’ moaned the sick woman, ‘my pretty lady, don’t abandon my little orphan; our master is far away, but you—-‘

She could not go on, she had spent all her strength in saying so much.

‘Do not worry yourself,’ replied Alexandra Pavlovna, ‘everything shall be done. Here is some tea and sugar I have brought you. If you can fancy it you must drink some. Have you a samovar, I wonder?’ she added, looking at the old man.

‘A samovar? We haven’t a samovar, but we could get one.’

‘Then get one, or I will send you one. And tell your granddaughter not to leave her like this. Tell her it’s shameful.’

The old man made no answer but took the parcel of tea and sugar with both hands.

‘Well, good-bye, Matrona!’ said Alexandra Pavlovna, ‘I will come and see you again; and you must not lose heart but take your medicine regularly.’

The old woman raised her head and drew herself a little towards Alexandra Pavlovna.

‘Give me your little hand, dear lady,’ she muttered.

Alexandra Pavlovna did not give her hand; she bent over her and kissed her on the forehead.

‘Take care, now,’ she said to the old man as she went out, ‘and give her the medicine without fail, as it is written down, and give her some tea to drink.’

Again the old man made no reply, but only bowed.

Alexandra Pavlovna breathed more freely when she came out into the fresh air. She put up her parasol and was about to start homewards, when suddenly there appeared round the corner of a little hut a man about thirty, driving a low racing droshky and wearing an old overcoat of grey linen, and a foraging cap of the same. Catching sight of Alexandra Pavlovna he at once stopped his horse and turned round towards her.