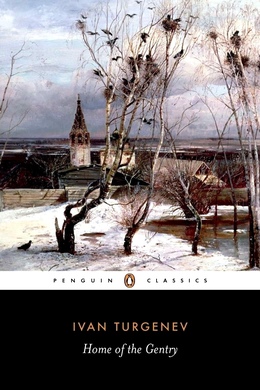 Home of the Gentry

A House of Gentlefolk

Coming back to the nest of his family home in Russia after years of fruitless endeavours away from his roots, Lavretsky decides to turn his back on the vacuous salons of Paris and his frivolous and unfaithful wife Varvara Pavlovna. On his return he meets Liza, the daughter of one of his cousins, whom he had known when they were children and who rekindles in him long-smothered feelings of love. News of Varvara’s death arrive from France, offering Lavretsky the prospect of a new life, but a cruel twist threatens to shatter his dreams and forces him to re-evaluate his plans.

A bright spring day was fading into evening. High overhead in the clear heavens small rosy clouds seemed hardly to move across the sky but to be sinking into its depths of blue.

In a handsome house in one of the outlying streets of the government town of O—- (it was in the year 1842) two women were sitting at an open window; one was about fifty, the other an old lady of seventy.

The name of the former was Marya Dmitrievna Kalitin. Her husband, a shrewd determined man of obstinate bilious temperament, had been dead for ten years. He had been a provincial public prosecutor, noted in his own day as a successful man of business. He had received a fair education and had been to the university; but having been born in narrow circumstances he realized early in life the necessity of pushing his own way in the world and making money. It had been a love-match on Marya Dmitrievna’s side. He was not bad-looking, was clever and could be very agreeable when he chose. Marya Dmitrievna Pesto–that was her maiden name–had lost her parents in childhood. She spent some years in a boarding-school in Moscow, and after leaving school, lived on the family estate of Pokrovskoe, about forty miles from O—-, with her aunt and her elder brother. This brother soon after obtained a post in Petersburg, and made them a scanty allowance. He treated his aunt and sister very shabbily till his sudden death cut short his career. Marya Dmitrievna inherited Pokrovskoe, but she did not live there long. Two years after her marriage with Kalitin, who succeeded in winning her heart in a few days, Pokrovskoe was exchanged for another estate, which yielded a much larger income, but was utterly unattractive and had no house. At the same time Kalitin took a house in the town of O—-, in which he and his wife took up their permanent abode. There was a large garden round the house, which on one side looked out upon the open country away from the town.

“And so,” decided Kalitin, who had a great distaste for the quiet of country life, “there would be no need for them to be dragging themselves off into the country.” In her heart Marya Dmitrievna more than once regretted her pretty Pokrovskoe, with its babbling brook, its wide meadows, and green copses; but she never opposed her husband in anything and had the greatest veneration for his wisdom and knowledge of the world. When after fifteen years of married life he died leaving her with a son and two daughters, Marya Dmitrievna had grown so accustomed to her house and to town life that she had no inclination to leave O—-.

In her youth Marya Dmitrievna had always been spoken of as a pretty blonde; and at fifty her features had not lost all charm, though they were somewhat coarser and less delicate in outline. She was more sentimental than kindhearted; and even at her mature age, she retained the manners of the boarding-school. She was self-indulgent and easily put out, even moved to tears when she was crossed in any of her habits. She was, however, very sweet and agreeable when all her wishes were carried out and none opposed her. Her house was among the pleasantest in the town. She had a considerable fortune, not so much from her own property as from her husband’s savings. Her two daughters were living with her; her son was being educated in one of the best government schools in Petersburg.

The old lady sitting with Marya Dmitrievna at the window was her father’s sister, the same aunt with whom she had once spent some solitary years in Pokrovskoe. Her name was Marfa Timofyevna Pestov. She had a reputation for eccentricity as she was a woman of an independent character, told every one the truth to his face, and even in the most straitened circumstances behaved just as if she had a fortune at her disposal. She could not endure Kalitin, and directly her niece married him, she removed to her little property, where for ten whole years she lived in a smoky peasants’ hut. Marya Dmitrievna was a little afraid of her. A little sharp-nosed woman with black hair and keen eyes even in her old age, Marfa Timofyevna walked briskly, held herself upright and spoke quickly and clearly in a sharp ringing voice. She always wore a white cap and a white dressing-jacket.

“What’s the matter with you?” she asked Marya Dmitrievna suddenly. “What are you sighing about, pray?”

“Nothing,” answered the latter. “What exquisite clouds!”

“You feel sorry for them, eh?”

Marya Dmitrievna made no reply.

“Why is it Gedeonovsky does not come?” observed Marfa Timofyevna, moving her knitting needles quickly. (She was knitting a large woolen scarf.) “He would have sighed with you–or at least he’d have had some fib to tell you.”

“How hard you always are on him! Sergei Petrovitch is a worthy man.”

“And how devoted he was to my poor husband!” observed Marya Dmitrievna; “even now he cannot speak of him without emotion.”