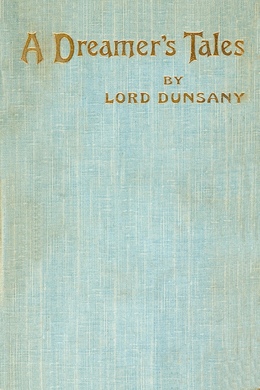 Lord Dunsany had invented a new mythology, and his fourth book supported this to the end. He skims the cream of old and new romance, giving a concentration of all that is most strange, poetical, grotesque, and glamorous, in his tales of unknown gods, untraveled deserts, ghostly peoples, cities, and temples, and cataclysms of which no echo has heretofore been heard.

When people ask me about ‘a book that changed my life,’ one of the several hundred honest answers I can give them is A Dreamer’s Tales. – Ursula K. Leguin

So I came down through the wood to the bank of Yann and found, as had been prophesied, the ship Bird of the River about to loose her cable.

The captain sate cross-legged upon the white deck with his scimitar lying beside him in its jewelled scabbard, and the sailors toiled to spread the nimble sails to bring the ship into the central stream of Yann, and all the while sang ancient soothing songs. And the wind of the evening descending cool from the snowfields of some mountainous abode of distant gods came suddenly, like glad tidings to an anxious city, into the wing-like sails.

And so we came into the central stream, whereat the sailors lowered the greater sails. But I had gone to bow before the captain, and to inquire concerning the miracles, and appearances among men, of the most holy gods of whatever land he had come from. And the captain answered that he came from fair Belzoond, and worshipped gods that were the least and humblest, who seldom sent the famine or the thunder, and were easily appeased with little battles. And I told how I came from Ireland, which is of Europe, whereat the captain and all the sailors laughed, for they said, “There are no such places in all the land of dreams.” When they had ceased to mock me, I explained that my fancy mostly dwelt in the desert of Cuppar-Nombo, about a beautiful blue city called Golthoth the Damned, which was sentinelled all round by wolves and their shadows, and had been utterly desolate for years and years, because of a curse which the gods once spoke in anger and could never since recall. And sometimes my dreams took me as far as Pungar Vees, the red walled city where the fountains are, which trades with the Isles and Thul. When I said this they complimented me upon the abode of my fancy, saying that, though they had never seen these cities, such places might well be imagined. For the rest of that evening I bargained with the captain over the sum that I should pay him for my fare if God and the tide of Yann should bring us safely as far as the cliffs by the sea, which are named Bar-Wul-Yann, the Gate of Yann.

And now the sun had set, and all the colors of the world and heaven had held a festival with him, and slipped one by one away before the imminent approach of night. The parrots had all flown home to the jungle on either bank, the monkeys in rows in safety on high branches of the trees were silent and asleep, the fireflies in the deeps of the forest were going up and down, and the great stars came gleaming out to look on the face of Yann. Then the sailors lighted lanterns and hung them round the ship, and the light flashed out on a sudden and dazzled Yann, and the ducks that fed along his marshy banks all suddenly arose, and made wide circles in the upper air, and saw the distant reaches of the Yann and the white mist that softly cloaked the jungle, before they returned again into their marshes.

And then the sailors knelt on the decks and prayed, not all together, but five or six at a time. Side by side there kneeled down together five or six, for there only prayed at the same time men of different faiths, so that no god should hear two men praying to him at once. As soon as any one had finished his prayer, another of the same faith would take his place. Thus knelt the row of five or six with bended heads under the fluttering sail, while the central stream of the River Yann took them on towards the sea, and their prayers rose up from among the lanterns and went towards the stars. And behind them in the after end of the ship the helmsman prayed aloud the helmsman’s prayer, which is prayed by all who follow his trade upon the River Yann, of whatever faith they be. And the captain prayed to his little lesser gods, to the gods that bless Belzoond.

And I too felt that I would pray. Yet I liked not to pray to a jealous God there where the frail affectionate gods whom the heathen love were being humbly invoked; so I bethought me, instead, of Sheol Nugganoth, whom the men of the jungle have long since deserted, who is now unworshipped and alone; and to him I prayed.

And upon us praying the night came suddenly down, as it comes upon all men who pray at evening and upon all men who do not; yet our prayers comforted our own souls when we thought of the Great Night to come.

And so Yann bore us magnificently onwards, for he was elate with molten snow that the Poltiades had brought him from the Hills of Hap, and the Marn and Migris were swollen full with floods; and he bore us in his might past Kyph and Pir, and we saw the lights of Goolunza.

Soon we all slept except the helmsman, who kept the ship in the mid-stream of Yann.

When the sun rose the helmsman ceased to sing, for by song he cheered himself in the lonely night. When the song ceased we suddenly all awoke, and another took the helm, and the helmsman slept.