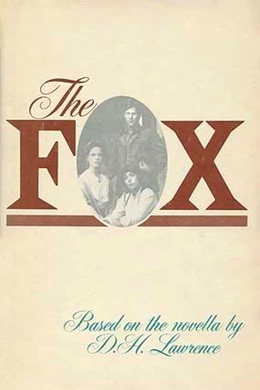 Nellie March and Jill Banford manage an ailing Berkshire farm at the time of the First World War, a task which is made all the more complicated by the frequent rampages of a local fox through their chicken coop. When a young soldier turns up and begins to wrest control of the farm by asserting his own ideas for its management, the two women must find ways to react to this new fox in their midst. A compelling study of the question of power, gender and sexuality, as well as a realistic portrayal of wartime rural England, The Fox showcases Lawrence’s inimitable gift for psychological observation and dramatic description.

The two girls were usually known by their surnames, Banford and March. They had taken the farm together, intending to work it all by themselves: that is, they were going to rear chickens, make a living by poultry, and add to this by keeping a cow, and raising one or two young beasts. Unfortunately, things did not turn out well.

Banford was a small, thin, delicate thing with spectacles. She, however, was the principal investor, for March had little or no money. Banford’s father, who was a tradesman in Islington, gave his daughter the start, for her health’s sake, and because he loved her, and because it did not look as if she would marry. March was more robust. She had learned carpentry and joinery at the evening classes in Islington. She would be the man about the place. They had, moreover, Banford’s old grandfather living with them at the start. He had been a farmer. But unfortunately the old man died after he had been at Bailey Farm for a year. Then the two girls were left alone.

They were neither of them young: that is, they were near thirty. But they certainly were not old. They set out quite gallantly with their enterprise. They had numbers of chickens, black Leghorns and white Leghorns, Plymouths and Wyandottes; also some ducks; also two heifers in the fields. One heifer, unfortunately, refused absolutely to stay in the Bailey Farm closes. No matter how March made up the fences, the heifer was out, wild in the woods, or trespassing on the neighbouring pasture, and March and Banford were away, flying after her, with more haste than success. So this heifer they sold in despair. Then, just before the other beast was expecting her first calf, the old man died, and the girls, afraid of the coming event, sold her in a panic, and limited their attentions to fowls and ducks.

In spite of a little chagrin, it was a relief to have no more cattle on hand. Life was not made merely to be slaved away. Both girls agreed in this. The fowls were quite enough trouble. March had set up her carpenter’s bench at the end of the open shed. Here she worked, making coops and doors and other appurtenances. The fowls were housed in the bigger building, which had served as barn and cow-shed in old days. They had a beautiful home, and should have been perfectly content. Indeed, they looked well enough. But the girls were disgusted at their tendency to strange illnesses, at their exacting way of life, and at their refusal, obstinate refusal to lay eggs.

March did most of the outdoor work. When she was out and about, in her puttees and breeches, her belted coat and her loose cap, she looked almost like some graceful, loose-balanced young man, for her shoulders were straight, and her movements easy and confident, even tinged with a little indifference or irony. But her face was not a man’s face, ever. The wisps of her crisp dark hair blew about her as she stooped, her eyes were big and wide and dark, when she looked up again, strange, startled, shy and sardonic at once. Her mouth, too, was almost pinched as if in pain and irony. There was something odd and unexplained about her. She would stand balanced on one hip, looking at the fowls pattering about in the obnoxious fine mud of the sloping yard, and calling to her favourite white hen, which came in answer to her name. But there was an almost satirical flicker in March’s big, dark eyes as she looked at her three-toed flock pottering about under her gaze, and the same slight dangerous satire in her voice as she spoke to the favoured Patty, who pecked at March’s boot by way of friendly demonstration.

Fowls did not flourish at Bailey Farm, in spite of all that March did for them. When she provided hot food for them in the morning, according to rule, she noticed that it made them heavy and dozy for hours. She expected to see them lean against the pillars of the shed in their languid processes of digestion. And she knew quite well that they ought to be busily scratching and foraging about, if they were to come to any good. So she decided to give them their hot food at night, and let them sleep on it. Which she did. But it made no difference.