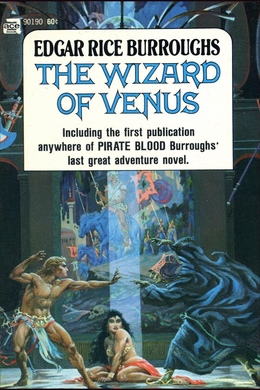 The Wizard of Venus

The final adventure of Carson Napier among the exotic peoples and beasts of Amtor is the sequel to his fabulous four Venus novels, it is an adventure not to be missed as Napier encounters a new kind of science and a new master of alien deviltry.

I believe that it was Roy Chapman Andrews who said that adventures were the result of incompetence and inefficiency, or words to that effect. If that be so, I must be the prize incompetent of two worlds; for I am always encountering the most amazing adventures.

It seems to me that I always plan intelligently, sometimes over meticulously; and then up jumps the Devil and everything goes haywire. However, in all fairness, I must admit that it is usually my fault and attributable to a definite temerariousness which is characteristic of me. I am rash. I take chances. I know that that is stupid. The thing that reflects most discredit upon my intelligence is the fact that oftentimes I know the thing I am about to do is stupid, and yet I go ahead and do it. I gamble with Death; my life is the stake. But I have a grand time, and so far I have always beaten Death to the draw.

The misadventure which altered the direction of flight of my rocket ship, so that I landed on Venus instead of Mars, was the result of a minor miscalculation by one of America’s most famous astronomers whose figures were checked and rechecked by several of his equally erudite fellows, as well as by myself. I feel that there was no lack of intelligence, no stupidity here; yet the result was a sequence of adventures such as probably never have befallen any other man.

I shall leave it to whoever may chance to read of this, my latest adventure, as to how much of chance and how much of stupidity were responsible for it. You are the judge. Arrange your reading lamp a little to the left of and just behind your favorite chair, and scan the evidence.

I knew Ero Shan in Havatoo, that model city beside the River of Death. He was my best friend there. He helped me build the first aeroplane to fly the empty skies of Venus. Duare called it an anotar, or bird-ship; and in it she and I escaped from Havatoo after the miscarriage of justice which had condemned her to death.

The next time I saw Ero Shan he was hanging on a wall in the museum of natural history in the city of Voo-ad, paralyzed from the neck down. Duare and I were hanging beside him in the same condition. He told me that he, with the assistance of some of the best scientific minds in Havatoo, had succeeded in building another anotar and that during a trial flight he had encountered the same terrific storm that had blown Duare and me thousands of miles off our course, with the result that he had been compelled to make a forced landing near Voo-ad, where he had ended up as an exhibit for hundreds of amoeba people to gawp at daily.

When we escaped, we took Ero Shan with us; and after a series of harrowing adventures we reached Sanara, the capital of Korva, which is a country on the continent of Anlap. Korva is the only country on Venus that Duare and I can call our own. I had fought for it against the blood-mad Zanies. I had saved the life of the little daughter of the present jong, or emperor, my good friend Taman; and because of these things he had adopted me as his son.

I am, therefore, Tanjong of Korva; and when Duare and I returned to Sanara after more than a year’s absence, we received, both figuratively and literally, a royal welcome; for they had long since given up all hope of ever seeing us again.

We were banquetted and feted for days; and, that the people might see us and welcome us home, we toured the city in a royal howdah on the back of a gorgeously trapped gantor, one of those leviathan beasts of burden whose size might dwarf the mammoth or the mastodon. Two hundred of these great beasts, bearing nobles and warriors, formed our cortege. At sight of us the people seemed to go mad with joy, attesting our popularity and the beauty of Duare.

At last we had a home, and we were home. We looked forward to long years of peace and happiness. No more travel, no more adventures for us! We were through. I didn’t know whether crown princes like to wear carpet slippers and sit with their feet on a desk and smoke a pipe and read of an evening, but that is what I wanted to do. You shall see how I did it.