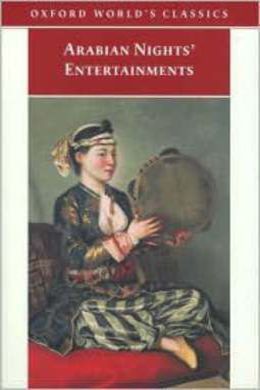 The Sultan Schahriar’s misguided resolution to shelter himself from the possible infidelities on his wives leads to an outbreak of barbarity in his kingdoms and a reign of terror in his court, stopped only by the resourceful Scheherazade. The tales with which Scheherazade nightly postpones the muderous intent of the sultan have entered our language and our lives like no other collection of narratives before or since. Sinbad, Aladdin, Ali Baba: all make their spectacular entrance on to the stage of English literary history in the Arabian Nights Entertainments. The stories contained in this ‘store house of ingenious fiction’ initiate a pattern of literary reference and influence which today remains as powerful and intense as it was throughout the eighteenth and nineteenth centuries.

A very wealthy merchant possessed several country-houses, where he kept a large number of cattle of every kind. He retired with his wife and family to one of these estates, in order to improve it under his own direction. He had the gift of understanding the language of beasts, but with this condition, that he should not, on pain of death, interpret it to any one else. And this hindered him from communicating to others what he learned by means of this faculty.

He kept in the same stall an ox and an ass. One day as he sat near them, and was amusing himself in looking at his children who were playing about him, he heard the ox say to the ass, “Sprightly, O! how happy do I think you, when I consider the ease you enjoy, and the little labour that is required of you. You are carefully rubbed down and washed, you have well-dressed corn, and fresh clean water. Your greatest business is to carry the merchant, our master, when he has any little journey to make, and were it not for that you would be perfectly idle. I am treated in a very different manner, and my condition is as deplorable as yours is fortunate. Daylight no sooner appears than I am fastened to a plough, and made to work till night, which so fatigues me, that sometimes my strength entirely fails. Besides, the labourer, who is always behind me, beats me continually. By drawing the plough, my tail is all flayed; and in short, after having laboured from morning to night, when I am brought in they give me nothing to eat but sorry dry beans, not so much as cleansed from dirt, or other food equally bad; and to heighten my misery, when I have filled my belly with such ordinary stuff, I am forced to lie all night in my own dung: so that you see I have reason to envy your lot.”

The ass did not interrupt the ox; but when he had concluded, answered, “They that called you a foolish beast did not lie. You are too simple; you suffer them to conduct you whither they please, and shew no manner of resolution. In the mean time, what advantage do you reap from all the indignities you suffer. You kill yourself for the ease, pleasure, and profit of those who give you no thanks for your service. But they would not treat you so, if you had as much courage as strength. When they come to fasten you to the stall, why do you not resist? why do you not gore them with your horns, and shew that you are angry, by striking your foot against the ground? And, in short, why do not you frighten them by bellowing aloud? Nature has furnished you with means to command respect; but you do not use them. They bring you sorry beans and bad straw; eat none of them, only smell and then leave them. If you follow my advice, you will soon experience a change, for which you will thank me.”

The ox took the ass’s advice in very good part, and owned he was much obliged to him. “Dear Sprightly,” added he, “I will not fail to do as you direct, and you shall see how I will acquit myself.” Here ended their conversation, of which the merchant lost not a word.

Early the next morning the labourer went for the ox. He fastened him to the plough and conducted him to his usual work. The ox, who had not forgotten the ass’s counsel, was very troublesome and untowardly all that day, and in the evening, when the labourer brought him back to the stall, and began to fasten him, the malicious beast instead of presenting his head willingly as he used to do, was restive, and drew back bellowing; and then made at the labourer, as if he would have gored him with his horns. In a word, he did all that the ass had advised him. The day following, the labourer came as usual, to take the ox to his labour; but finding the stall full of beans, the straw that he had put in the night before not touched, and the ox lying on the ground with his legs stretched out, and panting in a strange manner, he believed him to be unwell, pitied him, and thinking that it was not proper to take him to work, went immediately and acquainted his master with his condition. The merchant perceiving that the ox had followed all the mischievous advice of the ass, determined to punish the latter, and accordingly ordered the labourer to go and put him in the ox’s place, and to be sure to work him hard. The labourer did as he was desired. The ass was forced to draw the plough all that day, which fatigued him so much the more, as he was not accustomed to that kind of labour; besides he had been so soundly beaten, that he could scarcely stand when he came back.