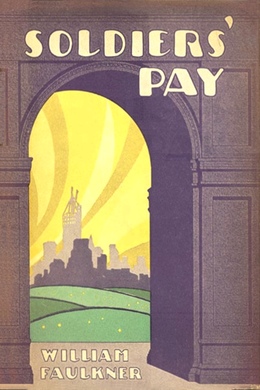 A group of soldiers travel by train across the United States in the aftermath of the First World War. One of them is horribly scarred, blind and almost entirely mute. Moved by his condition, a few civilian fellow travellers decided to see him home to Georgia, to a family who believed him dead, and a fiancée who grew tired of waiting. Faulkner’s first novel deals powerfully with lives blighted by war.

Lowe, Julian, number —, late a Flying Cadet, Umptieth Squadron, Air Service, known as ‘One Wing’ by the other embryonic aces of his flight, regarded the world with a yellow and disgruntled eye. He suffered the same jaundice that many a more booted one than he did, from Flight Commanders through Generals to the ambrosial single-barred (not to mention that inexplicable beast of the field which the French so beautifully call an aspiring aviator); they had stopped the war on him.

So he sat in a smouldering of disgusted sorrow, not even enjoying his Pullman prerogatives, spinning on his thumb his hat with its accursed white band.

‘Had your nose in the wind, hey, buddy?’ said Yaphank, going home and smelling to high heaven of bad whisky.

‘Ah, go to hell,’ he returned sourly and Yaphank doffed his tortured hat.

‘Why, sure, General—or should I of said Lootenant? Excuse me, madam. I got gassed doing k.p. and my sight ain’t been the same since. On to Berlin! Yeh, sure, we’re on to Berlin. I’m on to you, Berlin. I got your number. Number no thousand no hundred and naughty naught Private (very private) Joe Gilligan, late for parade, late for fatigue, late for breakfast when breakfast is late. The Statue of Liberty ain’t never seen me, and if she do, she’ll have to ’bout face.’

‘Brother, I dunno. Fellow that makes it was gave a Congressional medal last Chuesday because he has got a plan to stop the war. Enlist all the Dutchmen in our army and make ’em drink so much of his stuff a day for forty days, see? Ruin any war. Get the idea?’

‘Sure, they can tell. The women will all be dancing. Listen, I had a swell jane and she said, “for Christ’s sake, you can’t dance”. And I said, “like hell I can’t”. And we was dancing and she said, “what are you, anyways?” And I says, “what do you wanta know for? I can dance as well as any general or major or even a sergeant, because I just win four hundred in a poker game,” and she said, “oh, you did?” and I said, “sure, stick with me, kid,” and she said, “where is it?” Only I wouldn’t show it to her and then this fellow come up to her and said, “are you dancing this one?” And she said, “sure, I am. This bird don’t dance.” Well, he was a sergeant, the biggest one I ever seen. Say, he was like that fellow in Arkansaw that had some trouble with a nigger and a friend said to him, “well, I hear you killed a nigger yesterday.” And he said, “yes, weighed two hundred pounds.” Like a bear.’ He took the lurching of the train limberly and Cadet Lowe said, ‘For Christ’s sake.’

‘Sure,’ agreed the other. ‘She won’t hurt you, though. I done tried it. My dog won’t drink none of it of course, but then he got bad ways hanging around Brigade H.Q. He’s the one trophy of the war I got: something that wasn’t never bawled out by a shave-tail for not saluting. Say, would you kindly like to take a little something to keep off the sumniferous dews of this goddam country? The honour is all mine and you won’t mind it much after the first two drinks. Makes me homesick: like a garage. Ever work in a garage?’

Sitting on the floor between two seats was Yaphank’s travelling companion, trying to ignite a splayed and sodden cigar. Like devasted France, thought Cadet Lowe, swimming his memory through the adenoidal reminiscences of Captain Bleyth, an R.A.F. pilot delegated to temporarily reinforce their democracy.

‘Why, poor soldier,’ said his friend, tearfully, ‘all alone in no man’s land and no matches. Ain’t war hell? I ask you.’ He tried to push the other over with his leg, then he fell to kicking him, slowly. ‘Move over, you ancient mariner. Move over, you goddam bastard. Alas, poor Jerks or something (I seen that in a play, see? Good line) come on, come on; here’s General Pershing come to have a drink with the poor soldiers.’ He addressed Cadet Lowe. ‘Look at him: ain’t he sodden in depravity?’

‘Yeh, Alice. Where in hell are you? That other bottle. What’n’ell have you done with it? Keeping it to swim in when you get home?’

The man on the floor weeping said: ‘You wrong me as ever man wronged. Accuse me of hiding mortgage on house? Then take this soul and body; take all. Ravish me, big boy.’