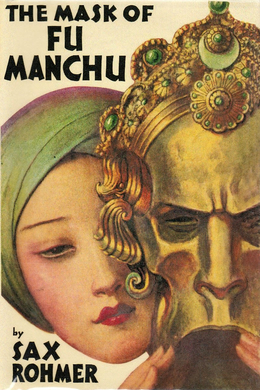 The Mask of Fu Manchu

After discovering the tomb of El Mokanna - the Veiled Prophet - and retrieving the precious relics buried there, the eminent archaeologist Sir Lionel Barton blows up the tomb. The heretic sect faithful to Mokanna interpret the fireball as their prophet’s second coming, and a violent uprising begins.

Meanwhile, the insidious Dr. Fu-Manchu senses an opportunity to use the powerful relics for his own evil ends. The action stretches from Persia to Cairo, then back to London, including an extraordinary confrontation inside of the Great Pyramid. Along the way his opponents face Ogboni killers, mind-control drugs, dervishes, and a ‘ghost mosque.’

Someone calling my name persistently. The voice was faint. I had been asleep, but dreaming hard, an evil from which ordinarily I don’t suffer. The voice fitted into my dream uncannily. . . .

I dreamed I was asleep in my tent in that desolate spot on the Khorassan border, not a hundred yards from the valley called the Place of the Great Magician. No expedition of Sir Lionel’s in which I had been employed had so completely got upon my nerves as this one.

Persia was new territory for me. And the chief’s sense of the dramatic, his innate showmanship (a trait which had done him endless damage in the eyes of the learned societies) had resulted in my being more or less in the dark as to the real object of our journey.

Perhaps, when names now famous are forgotten, that of Sir Lionel Barton will be remembered; he will be measured at his true stature—as the greatest Orientalist of his century. But, big, lovable, generous, I must nevertheless state quite definitely that he was next to impossible to work with.

When he made that historic discovery, when I realized what we had come for and what we had found, I experienced an attack of cold feet from which up to the moment of this queer awakening I had never wholly recovered.

It’s a poor joke to dig up a Moslem saint, even if he happens to have been really a heretic. I never remembered to have welcomed anything more than Sir Lionel’s decision to trek swiftly southwest to Ispahan. . . .

That voice again—and yet I could not escape from my dream. I thought that only two stretches of canvas separated me from the long green box, the iron casket containing those strange fruits of our discovery.

Sir Lionel’s party was not a large one, but I felt that the Moslems were not to be relied upon. It is one thing to excavate the tombs of the Pharaohs; it is a totally different thing in the eyes of an Arab to desecrate the resting place of a true believer, or even of a near-true believer.

To Ali Mahmoud, the headman, I would have trusted my life in Mecca; but the six Egyptians, who, together with Rima, Dr. Van Berg, Sir Lionel, and myself made up the party, although stanch enough ordinarily, had occasioned me grave doubts almost from the moment we had entered Persian territory.

I threw off the coil of dreams. I opened my eyes to utter darkness. My right hand automatically reached out for the torch—and in the physical movement came recognition of my true surroundings.

Khorassan? I was not in Khorassan. Nor was I under canvas—had not been under canvas for more than a week. I was in a house in Ispahan, and someone was calling me!

I grasped the torch, pressed the button, and looked about.

A scantily furnished room, I saw, its door of unpainted teak, as were the beams supporting its ceiling. I saw a rug of very good quality upon an otherwise uncarpeted floor, a large table littered with papers, photographs, books, and other odds and ends, and, from where I lay in bed, very little else.

My dream slipped into the background. The doubtful loyalty of our Moslem Egyptian workers counted for nothing, since by now they were probably back in Egypt, having been paid off a week before.

But—the green box! the green box was in Van Berg’s room, on the floor above . . . and the door directly facing my bed was opening!

I reached down with my left hand. A Colt repeater hung from a nail there. Sir Lionel had taught me this trick. To place a pistol openly beside one’s bed is to arm the enemy; to put it under the pillow is simply stupid. In doubtful environment, the chief invariably used a nail or a hook, whichever was practicable, between his bed and the wall.

Directing the ray of my torch upon the moving door, I waited.

As I did so, the door was flung open fully. Light shone upon tousled mahogany-colored curls and wide-open, startled gray eyes; upon a slim, silk-clad figure!

“Turn the light out, Shan—quick!”

It was Rima who stood in the open doorway.

I switched off the light; but in the instant of pressing the switch I glanced at my watch. The hour was 2 A. M.