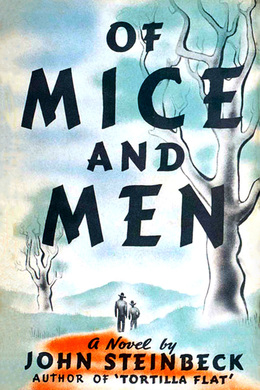 Of Mice and Men

An intimate portrait of two men who cherish the slim bond between them and the dream they share in a world marred by petty tyranny, misunderstanding, jealousy, and callousness. Clinging to each other in their loneliness and alienation, George and his simple-minded friend Lennie dream, as drifters will, of a place to call their own—a couple of acres and a few pigs, chickens, and rabbits back in Hill Country where land is cheap. But after they come to work on a ranch in the fertile Salinas Valley of California, their hopes, like “the best laid schemes o’ mice an’ men,”begin to go awry. Of Mice and Men also represents an experiment in form, as Steinbeck described his work, “a kind of playable novel, written in novel form but so scened and set that it can be played as it stands.” A rarity in American letters, it achieved remarkable success as a novel, a Broadway play, and three acclaimed films. Steinbeck’s tale of commitment, loneliness, hope, and loss remains one of America’s most widely read and beloved novels.

A few miles south of Soledad, the Salinas River drops in close to the hillside bank and runs deep and green. The water is warm too, for it has slipped twinkling over the yellow sands in the sunlight before reaching the narrow pool. On one side of the river the golden foothill slopes curve up to the strong and rocky Gabilan mountains, but on the valley side the water is lined with trees—willows fresh and green with every spring, carrying in their lower leaf junctures the debris of the winter’s flooding; and sycamores with mottled, white, recumbent limbs and branches that arch over the pool. On the sandy bank under the trees the leaves lie deep and so crisp that a lizard makes a great skittering if he runs among them. Rabbits come out of the brush to sit on the sand in the evening, and the damp flats are covered with the night tracks of ’coons, and with the spread pads of dogs from the ranches, and with the split–wedge tracks of deer that come to drink in the dark.

There is a path through the willows and among the sycamores, a path beaten hard by boys coming down from the ranches to swim in the deep pool, and beaten hard by tramps who come wearily down from the highway in the evening to jungle–up near water. In front of the low horizontal limb of a giant sycamore there is an ash pile made by many fires; the limb is worn smooth by men who have sat on it.

Evening of a hot day started the little wind to moving among the leaves. The shade climbed up the hills toward the top. On the sand banks the rabbits sat as quietly as little gray, sculptured stones. And then from the direction of the state highway came the sound of footsteps on crisp sycamore leaves. The rabbits hurried noiselessly for cover. A stilted heron labored up into the air and pounded down river. For a moment the place was lifeless, and then two men emerged from the path and came into the opening by the green pool.

They had walked in single file down the path, and even in the open one stayed behind the other. Both were dressed in denim trousers and in denim coats with brass buttons. Both wore black, shapeless hats and both carried tight blanket rolls slung over their shoulders. The first man was small and quick, dark of face, with restless eyes and sharp, strong features. Every part of him was defined: small, strong hands, slender arms, a thin and bony nose. Behind him walked his opposite, a huge man, shapeless of face, with large, pale eyes, with wide, sloping shoulders; and he walked heavily, dragging his feet a little, the way a bear drags his paws. His arms did not swing at his sides, but hung loosely.

The first man stopped short in the clearing, and the follower nearly ran over him. He took off his hat and wiped the sweat–band with his forefinger and snapped the moisture off. His huge companion dropped his blankets and flung himself down and drank from the surface of the green pool; drank with long gulps, snorting into the water like a horse. The small man stepped nervously beside him.

“Lennie!” he said sharply. “Lennie, for God’ sakes don’t drink so much.” Lennie continued to snort into the pool. The small man leaned over and shook him by the shoulder. “Lennie. You gonna be sick like you was last night.”

Lennie dipped his whole head under, hat and all, and then he sat up on the bank and his hat dripped down on his blue coat and ran down his back. “Tha’s good,” he said. “You drink some, George. You take a good big drink.” He smiled happily.

George unslung his bindle and dropped it gently on the bank. “I ain’t sure it’s good water,” he said. “Looks kinda scummy.”

Lennie dabbled his big paw in the water and wiggled his fingers so the water arose in little splashes; rings widened across the pool to the other side and came back again. Lennie watched them go. “Look, George. Look what I done.”

George knelt beside the pool and drank from his hand with quick scoops. “Tastes all right,” he admitted. “Don’t really seem to be running, though. You never oughta drink water when it ain’t running, Lennie,” he said hopelessly. “You’d drink out of a gutter if you was thirsty.” He threw a scoop of water into his face and rubbed it about with his hand, under his chin and around the back of his neck. Then he replaced his hat, pushed himself back from the river, drew up his knees and embraced them. Lennie, who had been watching, imitated George exactly. He pushed himself back, drew up his knees, embraced them, looked over to George to see whether he had it just right. He pulled his hat down a little more over his eyes, the way George’s hat was.

George stared morosely at the water. The rims of his eyes were red with sun glare. He said angrily, “We could just as well of rode clear to the ranch if that bastard bus driver knew what he was talkin’ about.