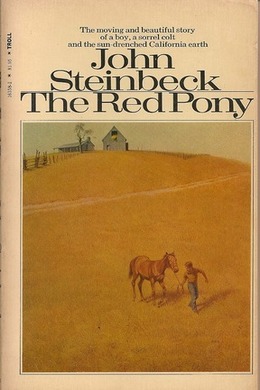 Raised on a ranch in northern California, Jody is well-schooled in the hard work and demands of a rancher’s life. He is used to the way of horses, too; but nothing has prepared him for the special connection he will forge with Gabilan, a hot-tempered pony his father gives him. With Billy Buck, the hired hand, Jody tends and trains his horse, restlessly anticipating the moment he will sit high upon Gabilan’s saddle. But when Gabilan falls ill, Jody discovers there are still lessons he must learn about the ways of nature and, particularly, the ways of man.

At daybreak Billy Buck emerged from the bunkhouse and stood for a moment on the porch looking up at the sky. He was a broad, bandy–legged little man with a walrus mustache, with square hands, puffed and muscled on the palms. His eyes were a contemplative, watery gray and the hair which protruded from under his Stetson hat was spiky and weathered. Billy was still stuffing his shirt into his blue jeans as he stood on the porch. He unbuckled his belt and tightened it again. The belt showed, by the worn shiny places opposite each hole, the gradual increase of Billy’s middle over a period of years. When he had seen to the weather, Billy cleared each nostril by holding its mate closed with his forefinger and blowing fiercely. Then he walked down to the barn, rubbing his hands together. He curried and brushed two saddle horses in the stalls, talking quietly to them all the time; and he had hardly finished when the iron triangle started ringing at the ranch house. Billy stuck the brush and currycomb together and laid them on the rail, and went up to breakfast. His action had been so deliberate and yet so wasteless of time that he came to the house while Mrs. Tiflin was still ringing the triangle. She nodded her gray head to him and withdrew into the kitchen. Billy Buck sat down on the steps, because he was a cow–hand, and it wouldn’t be fitting that he should go first into the dining–room. He heard Mr. Tiflin in the house, stamping his feet into his boots.

The high jangling note of the triangle put the boy Jody in motion. He was only a little boy, ten years old, with hair like dusty yellow grass and with shy polite gray eyes, and with a mouth that worked when he thought. The triangle picked him up out of sleep. It didn’t occur to him to disobey the harsh note. He never had: no one he knew ever had. He brushed the tangled hair out of his eyes and skinned his nightgown off. In a moment he was dressed—blue chambray shirt and overalls. It was late in the summer, so of course there were no shoes to bother with. In the kitchen he waited until his mother got from in front of the sink and went back to the stove. Then he washed himself and brushed back his wet hair with his fingers. His mother turned sharply on him as he left the sink. Jody looked shyly away.

“I’ve got to cut your hair before long,” his mother said. “Breakfast’s on the table. Go on in, so Billy can come.”

Jody sat at the long table which was covered with white oilcloth washed through to the fabric in some places. The fried eggs lay in rows on their platter. Jody took three eggs on his plate and followed with three thick slices of crisp bacon. He carefully scraped a spot of blood from one of the egg yolks.

Billy Buck clumped in. “That won’t hurt you,” Billy explained. “That’s only a sign the rooster leaves.”

Jody’s tall stern father came in then and Jody knew from the noise on the floor that he was wearing boots, but he looked under the table anyway, to make sure. His father turned off the oil lamp over the table, for plenty of morning light now came through the windows.

Jody did not ask where his father and Billy Buck were riding that day, but he wished he might go along. His father was a disciplinarian. Jody obeyed him in everything without questions of any kind. Now, Carl Tiflin sat down and reached for the egg platter.

“Got the cows ready to go, Billy?” he asked.

“In the lower corral,” Billy said. “I could just as well take them in alone.”

“Sure you could. But a man needs company. Besides your throat gets pretty dry.” Carl Tiflin was jovial this morning.

Jody’s mother put her head in the door. “What time do you think to be back, Carl?”

“I can’t tell. I’ve got to see some men in Salinas. Might be gone till dark.”

The eggs and coffee and big biscuits disappeared rapidly. Jody followed the two men out of the house. He watched them mount their horses and drive six old milk cows out of the corral and start over the hill toward Salinas. They were going to sell the old cows to the butcher.

When they had disappeared over the crown of the ridge Jody walked up the hill in back of the house. The dogs trotted around the house corner hunching their shoulders and grinning horribly with pleasure. Jody patted their heads—Doubletree Mutt with the big thick tail and yellow eyes, and Smasher, the shepherd, who had killed a coyote and lost an ear in doing it. Smasher’s one good ear stood up higher than a collie’s ear should. Billy Buck said that always happened. After the frenzied greeting the dogs lowered their noses to the ground in a businesslike way and went ahead, looking back now and then to make sure that the boy was coming. They walked up through the chicken yard and saw the quail eating with the chickens. Smasher chased the chickens a little to keep in practice in case there should ever be sheep to herd