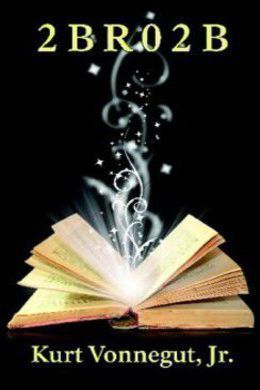 2BR02B is a science fiction short story by Kurt Vonnegut, originally published in the pulp digest magazine Worlds of If Science Fiction, January 1962. The title is pronounced “2 B R naught 2 B” and refers to the telephone number one dials to schedule an assisted suicide with the Federal Bureau of Termination. The setting is a society in which aging has been cured, individuals have indefinite lifespans, and population control is used to limit the population of the United States to forty million. This is maintained through a combination of infanticide and government-assisted suicide - in short, in order for someone to be born, someone must first volunteer to die. As a result, births are few and far between, and deaths occur primarily by accident. (source: Wikipedia)

Everything was perfectly swell.

There were no prisons, no slums, no insane asylums, no cripples, no poverty, no wars.

All diseases were conquered. So was old age.

Death, barring accidents, was an adventure for volunteers.

The population of the United States was stabilized at forty–million souls.

One bright morning in the Chicago Lying–in Hospital, a man named Edward K. Wehling, Jr., waited for his wife to give birth. He was the only man waiting. Not many people were born a day any more.

Wehling was fifty–six, a mere stripling in a population whose average age was one hundred and twenty–nine.

X–rays had revealed that his wife was going to have triplets. The children would be his first.

Young Wehling was hunched in his chair, his head in his hand. He was so rumpled, so still and colorless as to be virtually invisible. His camouflage was perfect, since the waiting room had a disorderly and demoralized air, too. Chairs and ashtrays had been moved away from the walls. The floor was paved with spattered dropcloths.

A sardonic old man, about two hundred years old, sat on a stepladder, painting a mural he did not like. Back in the days when people aged visibly, his age would have been guessed at thirty–five or so. Aging had touched him that much before the cure for aging was found.

The mural he was working on depicted a very neat garden. Men and women in white, doctors and nurses, turned the soil, planted seedlings, sprayed bugs, spread fertilizer.

Men and women in purple uniforms pulled up weeds, cut down plants that were old and sickly, raked leaves, carried refuse to trash–burners.

Never, never, never—not even in medieval Holland nor old Japan—had a garden been more formal, been better tended. Every plant had all the loam, light, water, air and nourishment it could use.

A hospital orderly came down the corridor, singing under his breath a popular song:

If you don’t like my kisses, honey, Here’s what I will do: I’ll go see a girl in purple, Kiss this sad world toodle–oo. If you don’t want my lovin’, Why should I take up all this space? I’ll get off this old planet, Let some sweet baby have my place.

The orderly looked in at the mural and the muralist. “Looks so real,” he said, “I can practically imagine I’m standing in the middle of it.”

“What makes you think you’re not in it?” said the painter. He gave a satiric smile. “It’s called ‘The Happy Garden of Life,’ you know.”

He was referring to one of the male figures in white, whose head was a portrait of Dr. Benjamin Hitz, the hospital’s Chief Obstetrician. Hitz was a blindingly handsome man.

“Lot of faces still to fill in,” said the orderly. He meant that the faces of many of the figures in the mural were still blank. All blanks were to be filled with portraits of important people on either the hospital staff or from the Chicago Office of the Federal Bureau of Termination.

“Must be nice to be able to make pictures that look like something,” said the orderly.

The painter’s face curdled with scorn. “You think I’m proud of this daub?” he said. “You think this is my idea of what life really looks like?”

“What’s your idea of what life looks like?” said the orderly.

The painter gestured at a foul dropcloth. “There’s a good picture of it,” he said. “Frame that, and you’ll have a picture a damn sight more honest than this one.”

“You’re a gloomy old duck, aren’t you?” said the orderly.

“Is that a crime?” said the painter.

The orderly shrugged. “If you don’t like it here, Grandpa—” he said, and he finished the thought with the trick telephone number that people who didn’t want to live any more were supposed to call. The zero in the telephone number he pronounced “naught.”

“To be or not to be” was the telephone number of the municipal gas chambers of the Federal Bureau of Termination.