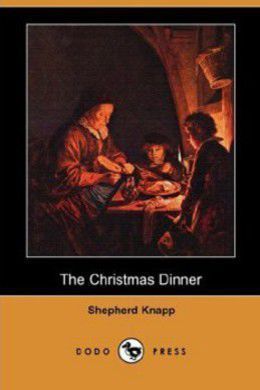 The Christmas Dinner is an 18-page play about Christmas. It is intended, not only for acting, but also for reading. What sort of a Christmas play do the boys and girls like, and in what sort do we like to see them take part? It should be a play, surely, in which the dialogue is simple and natural, not stilted and artificial; one that seems like a bit of real life, and yet has plenty of fancy and imagination in it; one that suggests and helps to perpetuate some of the happy and wholesome customs of Christmas; above all, one that is pervaded by the Christmas spirit.

Now the Curtain opens, and you see a farmhouse kitchen, just as Mother Goose promised. At the back, opposite to you, is a fire–place, with a mantel shelf over it. A bright fire is burning. On the mantel is a lamp, lighted, and an unlighted candle; also some other things that you’ll hear about later. There is a cupboard against the back wall. At one side of the room is the door leading out of doors; beside it is a large wood box, where the fire–wood is kept; and nearby are a broom, leaning against the wall, and a dustpan. On the other side of the room is another door, which leads to the rest of the house; beside that is a big clothes basket, where the soiled clothes are kept. Close to the fire, one on each side, the Grandfather and the Grandmother are sitting in comfortable chairs. Near the front and a little at one side are a table and a chair. On the table is a dishpan and a number of dishes, which the Mother is washing when the curtain opens.

The first one to speak is the GRANDMOTHER, and this is what she says: Haven’t you nearly finished, Mary?

Yes, almost, answers MOTHER: only a few more things to be washed, and then I can sit down and rest.

GRANDMOTHER asks, Is everything ready for the Christmas dinner tomorrow?

Every single thing, MOTHER answers. The goose is ready to go on the fire; the apple sauce is made; the bread and the pies are baked; and the plum pudding—well, you saw the pudding yourself, so that I don’t need to tell you about that. It’s a beauty, if I do say so.

At this moment the outside door opens, and the two children, Walter and Gertrude, run in. Their coats and mittens show that they have been playing in the snow.

Oh, Mother, says WALTER, it’s getting dark outside. May we come in now? Is your work all done?

Not quite yet, dears, his MOTHER answers. Run out, both of you, for ten minutes more, and then I’ll have everything cleared away. It makes me nervous to have you about while things are in a mess.

All right, mother, says GERTRUDE. Come on, Walter, I’ll race you to the gate. And both the children go out–of–doors again, running. Gertrude was nearer the door, and gets out first.

Such energy as those children have! exclaims MOTHER, with a sigh, as she goes on with her work. Sometimes it makes me tired to watch them. There, every last thing is washed, and now, when I’ve dried them, I can sit down. She goes on talking while she dries. There’s one thing I haven’t had time to do—those paper caps. I suppose the children will be disappointed, but I simply couldn’t find time to make them. The colored paper and paste and scissors are all on the mantel shelf and I suppose I ought to sit right down now and go to work on them, but I declare, I’m too tired. Getting ready for Christmas seems to take all the strength I have. I think I must be getting old.

You getting old! exclaims GRANDMOTHER. Nonsense! Wait till you get to be our age; then you might talk of getting old and feeling tired. Isn’t that so, John? John is Grandfather’s first name.

Yes, GRANDFATHER answers, when you get to be as old as we are, then you’ll know what it is to be tired, Christmas or another day. I tried to help James shut the gate this morning, where the snow had drifted against it, and it tired me so, I haven’t stirred out of this chair since.

Now the outside door opens a second time, and the children come in again, Gertrude first.

Yes, answers MOTHER, I’ve just finished. Take off your coats, and try to quiet down. She puts the clean dishes away in the cupboard and carries the dish pan away into the next room.

The children take of their coats and caps. Walter goes over by his Grandfather and leans against his chair. Gertrude sits down on a low stool beside her Grandmother.

What have you children been doing all the afternoon? asks GRANDFATHER.

Oh, we’ve had the greatest fun, cries GERTRUDE. First we went skating down on the mill pond.

And then we built a snow fort, WALTER chimes in, and the Indians attacked it, and we drove them off with snow–balls.

And then we played tag out by the barn, adds GERTRUDE.

No, WALTER corrects her, that was afterwards; don’t you remember, Gertrude? Before that, we raced down to the crossroads to see if the postman had brought any mail.

Oh, yes, GERTRUDE agrees, and you tripped and fell down in the snow drift, and oh, grandfather, you ought to have seen him when he got up; he was a sight. But it all brushed off.

And don’t you feel tired after doing all that? GRANDMOTHER asks.

No, says GERTRUDE, I’m not a bit tired; are you, Walter?

Not a bit, says WALTER.

Well, that’s the beauty of being young, GRANDMOTHER says, in a tired sort of voice. I suppose that when I was your age, I was just the same as you children are now.

How long is it since you were our age? WALTER asks.