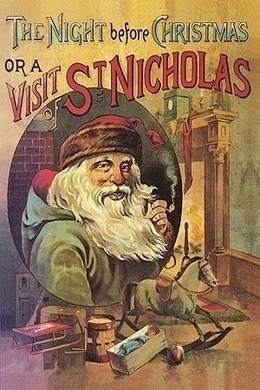 The Night Before Christmas

A Visit from St. Nicholas

As St. Nick and eight tiny reindeer descend through a brilliant night sky onto the roof of a Victorian house in a snowy New England village, the famous Christmas poem begins. The father of the family narrates the words just as Clement Moore wrote them, and artist Jan Brett captures the spirit in brilliant illustrations that reflect this memorable night. Visually she extends this favorite Christmas story for children, who will delight in watching the two mischievous stowaways from the North Pole enthusiastically exploring the sacks of gifts on the roof while St. Nick, unaware, journeys down the chimney… until the toys spill down onto the lawn and he turns with a jerk! Antique toys and exquisite ornaments frame the borders in which sometimes the father, St. Nick, or the family cat and dog look on, as the story unfolds. A unique and beautiful edition to be cherished for years to come by all the family, especially the youngest, who find the night before Christmas perhaps the most exciting night of the year.

Amid the many celebrations last Christmas Eve, in various places by different persons, there was one, in New York City, not like any other anywhere. A company of men, women, and children went together just after the evening service in their church, and, standing around the tomb of the author of “A Visit from St. Nicholas,” recited together the words of the poem which we all know so well and love so dearly.

Dr. Clement C. Moore, who wrote the poem, never expected that he would be remembered by it. If he expected to be famous at all as a writer, he thought it would be because of the Hebrew Dictionary that he wrote.

He was born in a house near Chelsea Square, New York City, in 1781; and he lived there all his life. It was a great big house, with fireplaces in it;–just the house to be living in on Christmas Eve.

Dr. Moore had children. He liked writing poetry for them even more than he liked writing a Hebrew Dictionary. He wrote a whole book of poems for them.

One year he wrote this poem, which we usually call “‘Twas the Night before Christmas,” to give to his children for a Christmas present. They read it just after they had hung up their stockings before one of the big fireplaces in their house. Afterward, they learned it, and sometimes recited it, just as other children learn it and recite it now.

It was printed in a newspaper. Then a magazine printed it, and after a time it was printed in the school readers. Later it was printed by itself, with pictures. Then it was translated into German, French, and many other languages. It was even made into “Braille”; which is the raised printing that blind children read with their fingers. But never has it been given to us in so attractive a form as in this book. It has happened that almost all the children in the world know this poem. How few of them know any Hebrew!

Every Christmas Eve the young men studying to be ministers at the General Theological Seminary, New York City, put a holly wreath around Dr. Moore’s picture, which is on the wall of their dining-room. Why? Because he gave the ground on which the General Theological Seminary stands? Because he wrote a Hebrew Dictionary? No. They do it because he was the author of “A Visit from St. Nicholas.”

Most of the children probably know the words of the poem. They are old. But the pictures that Miss Jessie Willcox Smith has painted for this edition of it are new. All the children, probably, have seen other pictures painted by Miss Smith, showing children at other seasons of the year. How much they will enjoy looking at these pictures, showing children on that night that all children like best,–Christmas Eve!