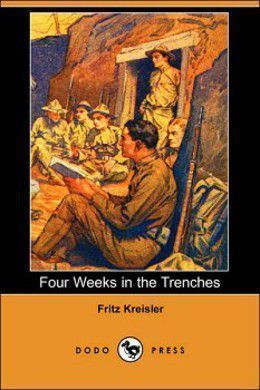 Four Weeks in the Trenches

World War I Story of a Violinist

Fritz Kreisler - one of the greatest violinists of hist time, if not of all time, recounts his experiences during World War I as an Austrian soldier. Four Weeks in the Trenches is a brief record of his fighting on the Eastern front in the great war, first published in 1915 after he was honorably discharged when wounded. He spent the remaining years of the war in America. He returned to Europe in 1924, living first in Berlin, then moving to France in 1938. Shortly thereafter, at the outbreak of World War II, he settled once again in the United States, becoming a naturalized citizen in 1943. This book is notable for being the first war book to actually be written by a famous violinist serving at the front. The material is presented with vigor and simplicity. One of the phenomena of war–the sudden transformation of the highly emotional, neurotic man of literary or artistic pursuits, accustomed to an atmosphere of refinement, culture, and luxury, into a primeval savage in the space of a few days–interests the author.

In trying to recall my impressions during my short war duty as an officer in the Austrian Army, I find that my recollections of this period are very uneven and confused. Some of the experiences stand out with absolute clearness; others, however, are blurred. Two or three events which took place in different localities seem merged into one, while in other instances recollection of the chronological order of things is missing. This curious indifference of the memory to values of time and space may be due to the extraordinary physical and mental stress under which the impressions I am trying to chronicle were received. The same state of mind I find is rather characteristic of most people I have met who were in the war. It should not be forgotten, too, that the gigantic upheaval which changed the fundamental condition of life overnight and threatened the very existence of nations naturally dwarfed the individual into nothingness, and the existing interest in the common welfare left practically no room for personal considerations. Then again, at the front, the extreme uncertainty of the morrow tended to lessen the interest in the details of to-day; consequently I may have missed a great many interesting happenings alongside of me which I would have wanted to note under other circumstances. One gets into a strange psychological, almost hypnotic, state of mind while on the firing line which probably prevents the mind’s eye from observing and noticing things in a normal way. This accounts, perhaps, for some blank spaces in my memory. Besides, I went out completely resigned to my fate, without much thought for the future. It never occurred to me that I might ever want to write my experiences, and consequently I failed to take notes or to establish certain mnemo-technical landmarks by the aid of which I might now be able to reconstruct all details. I am, therefore, reduced to present an incoherent and rather piecemeal narrative of such episodes as forcibly impressed themselves upon my mind and left an ineradicable mark upon my memory.

The outbreak of the war found my wife and me in Switzerland, where we were taking a cure. On the 31st of July, on opening the paper, I read that the Third Army Corps, to which my regiment (which is stationed in Graz) belonged, had received an order for mobilization.

Although I had resigned my commission as an officer two years before, I immediately left Switzerland, accompanied by my wife, in order to report for duty. As it happened, a wire reached me a day later calling me to the colors.

We went by way of Munich. It was the first day of the declaration of the state of war in Germany. Intense excitement prevailed. In Munich all traffic was stopped; no trains were running except for military purposes. It was only due to the fact that I revealed my intention of rejoining my regiment in Austria that I was able to pass through at all, but by both the civil and military authorities in Bavaria I was shown the greatest possible consideration and passed through as soon as possible.

We reached Vienna on August first. A startling change had come over the city since I had left it only a few weeks before. Feverish activity everywhere prevailed. Reservists streamed in by thousands from all parts of the country to report at headquarters. Autos filled with officers whizzed past. Dense crowds surged up and down the streets. Bulletins and extra editions of newspapers passed from hand to hand. Immediately it was evident what a great leveler war is. Differences in rank and social distinctions had practically ceased. All barriers seemed to have fallen; everybody addressed everybody else.

I saw the crowds stop officers of high rank and well-known members of the aristocracy and clergy, also state officials and court functionaries of high rank, in quest of information, which was imparted cheerfully and patiently. The imperial princes could frequently be seen on the Ring Strasse surrounded by cheering crowds or mingling with the public unceremoniously at the cafes, talking to everybody. Of course, the army was idolized. Wherever the troops marched the public broke into cheers and every uniform was the center of an ovation.

While coming from the station I saw two young reservists, to all appearances brothers, as they hurried to the barracks, carrying their small belongings in a valise. Along with them walked a little old lady crying, presumably their mother. They passed a general in full uniform. Up went their hands to their caps in military salute, whereupon the old general threw his arms wide open and embraced them both, saying: “Go on, my boys, do your duty bravely and stand firm for your emperor and your country. God willing, you will come back to your old mother.” The old lady smiled through her tears. A shout went up, and the crowds surrounding the general cheered him. Long after I had left I could hear them shouting.