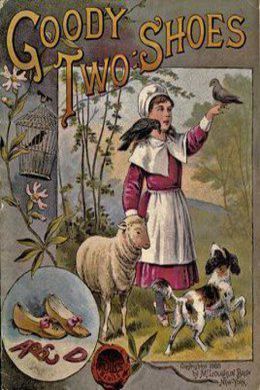 Farmer Meanwell was at one time a very rich man. He owned large fields, and had fine flocks of sheep, and plenty of money. But all at once his good fortune seemed to desert him. Year after year his crops failed, his sheep died off, and he was obliged to borrow money to pay his rent and the wages of those who worked on the farm.

At last he had to sell his farm, but even this did not bring him in money enough to pay his debts, and he was worse off than ever.

Among those who had lent money to Farmer Meanwell were Sir Thomas Gripe, and a Farmer named Graspall.

Sir Thomas was a very rich man indeed, and Farmer Graspall had more money than he could possibly use. But they were both very greedy and covetous, and particularly hard on those who owed them anything. Farmer Graspall abused Farmer Meanwell and called him all sorts of dreadful names; but the rich Sir Thomas Gripe was more cruel still, and wanted the poor debtor shut up in jail.

So poor Farmer Meanwell had to hasten from the place where he had lived for so many years, in order to get out of the way of these greedy men.

He went to the next village, taking his wife and his two little children with him. But though he was free from Gripe and Graspall he was not free from trouble and care.

He soon fell ill, and when he found himself unable to get food and clothes for his family, he grew worse and worse and soon died.

His wife could not bear the loss of her husband, whom she loved so dearly, and in a few days she was dead.

The two orphan children seemed to be left entirely alone in the world, with no one to look after them, or care for them, but their Heavenly Father.

They trotted around hand in hand, and the poorer they became the more they clung to each other. Poor, ragged, and hungry enough they were!

Tommy had two shoes, but Margery went barefoot. They had nothing to eat but the berries that grew in the woods, and the scraps they could get from the poor people in the village, and at night they slept in barns or under hay–stacks.

Their rich relations were too proud to notice them. But Mr. Smith, the clergyman of the village where the children were born, was not that sort of a man. A rich relation came to visit him—a kind–hearted gentleman—and the clergyman told him all about Tommy and Margery. The kind gentleman pitied them, and ordered Margery a pair of shoes and gave Mr. Smith money to buy her some clothes, which she needed sadly. As for Tommy he said he would take him off to sea with him and make him a sailor. After a few days, the gentleman said he must go to London and would take Tommy with him, and sad was the parting between the two children.

Poor Margery was very lonely indeed, without her brother, and might have cried herself sick but for the new shoes that were brought home to her.

They turned her thoughts from her grief; and as soon as she had put them on she ran in to Mrs. Smith and cried out: “Two shoes, ma’am, two shoes!” These words she repeated to every one she met, and thus it was she got the name of Goody Two Shoes.

Little Margery had seen how good and wise Mr. Smith was, and thought it was because of his great learning; and she wanted, above all things, to learn to read. At last she made up her mind to ask Mr. Smith to teach her when he had a moment to spare. He readily agreed to do this, and Margery read to him an hour every day, and spent much time with her books.

Then she laid out a plan for teaching others more ignorant than herself. She cut out of thin pieces of wood ten sets of large and small letters of the alphabet, and carried these with her when she went from house to house. When she came to Billy Wilson’s she threw down the letters all in a heap, and Billy picked them out and sorted them in lines, thus:

and so on until all the letters were in their right places.

From there Goody Two Shoes trotted off to another cottage, and here were several children waiting for her. As soon as the little girl came in they all crowded around her, and were eager to begin their lessons at once.

Then she threw the letters down and said to the boy next her, “What did you have for dinner to–day?” “Bread,” answered the little boy. “Well, put down the first letter,” said Goody Two Shoes. Then he put down B, and the next child R, and the next E, and the next A, and the next D, and there was the whole word—BREAD.

“What did you have for dinner, Polly Driggs?”

“Apple–pie,” said Polly; upon which she laid down the first letter, A, and the next put down a P, and the next another P, and so on until the words Apple and Pie were united, and stood thus: APPLE PIE.

Now it happened one evening that Goody Two Shoes was going home rather late. She had made a longer round than usual, and everybody had kept her waiting, so that night came on before her day’s work was done.