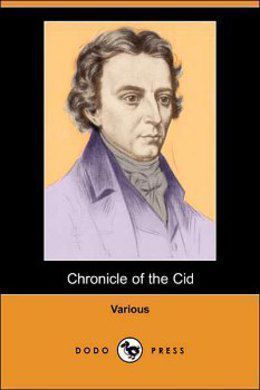 Chronicle Of The Cid

The heroic story of the King Arthur, or the Roland, of the Spaniards, less mythical but no less interesting. Robert Southey’s “Chronicle of the Cid” is all translation from the Spanish, but is not translation from a single book. Its groundwork is that part of the Cronica General de Espana, the most ancient of the Prose Chronicles of Spain, in which adventures of the Cid are fully told. This old Chronicle was compiled in the reign of Alfonso the Wise, who was learned in the exact science of his time, and also a troubadour. Alfonso reigned between the years 1252 and 1284, and the Chronicle was written by the King himself, or under his immediate direction.

King Don Ferrando succeeded to the states of Castille after the death of his father King Don Sancho el Mayor, in the era 1072, which was the year of the Incarnation 1034, and from the coming of the Patriarch Tubal to settle in Spain 3197, and from the general deluge 3339, and from the creation of the world 4995, according to the computation of the Hebrews, and from the beginning of the false sect of the Moors 413. And in the year 1037 Ferrando slew Bermudo the King of Leon in battle, who was his wife’s brother, and conquered his kingdom, and succeeded to it in right of his wife Doña Sancha. So he was the first person who united the states of Castille and Leon, and the first who was called King of Castille; for till this time the lords of that country had been called Counts. He was a good king, and one who judged justly and feared God, and was bold in all his doings. Before he reigned he had by Doña Sancha his wife the Infanta Doña Urraca, his eldest daughter, who was a right excellent lady, of good customs and bounty and beauty; and after her he had the Infante Don Sancho, his eldest son and heir; and then the Infanta Doña Elvira, whom after the death of the King her father, her brother King Don Alfonso married to the Count Don Garci de Cabra. And after he became King he had the Infante Don Alfonso, and the Infante Don Garcia, who was the youngest of all. And he put his sons to read, that they might be of the better understanding, and he made them take arms, and be shown how to demean themselves in battle, and to be huntsmen. And he ordered that his daughters should be brought up in the studies beseeming dames, so that they might be of good customs, and instructed in devotion and in all things which it behoved them to know.

In those days arose Rodrigo of Bivar. who was a youth strong in arms and of good customs; and the people rejoiced in him, for he bestirred himself to protect the land from the Moors. Now it behoves that ye should know whence he came, and from what men he was descended, because we have to proceed with his history. Ye are to know therefore, that after the treason which King Don Ordoño the Second committed upon the Counts of Castille, that country remained without a chief: the people therefore chose two judges, of whom the one was called Nuño Rasuera, and the other Layn Calvo, who married Nuño’s daughter, Elvira Nuñez. From Nuño Rasuera King Don Ferrando descended, and from Layn Calvo, Diego Laynez, who took to wife Doña Teresa Rodríguez, the daughter of Don Rodrigo Alvarez, Count and Governor of Asturias, and had by her this Rodrigo. In the year of the Incarnation 1026 was Rodrigo born, of this noble lineage, in the city of Burgos, and in the street of St. Martin, hard by the palace of the Counts of Castille, where Diego Laynez had his dwelling. In the church of St. Martin was he baptized, a good priest of Burgos, whose name was Don Pedro de Pernegas, being his godfather: and to this church Rodrigo was always greatly affectionate, and he built the belfry tower thereof.

At this time it came to pass that there was strife between Count Don Gomez the Lord of Gormaz, and Diego Laynez the father of Rodrigo; and the Count insulted Diego and gave him a blow. Now Diego was a man in years, and his strength had passed from him, so that he could not take vengeance, and he retired to his home to dwell there in solitude and lament over his dishonour. And he took no pleasure in his food, neither could he sleep by night, nor would he lift up his eyes from the ground, nor stir out of his house, nor commune with his friends, but turned from them in silence as if the breath of his shame would taint them. Rodrigo was yet but a youth, and the Count was a mighty man in arms, one who gave his voice first in the Cortes, and was held to be the best in the war, and so powerful that he had a thousand friends among the mountains. Howbeit all these things appeared as nothing to Rodrigo when he thought of the wrong done to his father, the first which had ever been offered to the blood of Layn Calvo. He asked nothing but justice of Heaven, and of man he asked only a fair field; and his father seeing of how good heart he was, gave him his sword and his blessing. The sword had been the sword of Mudarra in former times, and when Rodrigo held its cross in his hand, he thought within himself that his arm was not weaker than Mudarra’s. And he went out and defied the Count and slew him, and smote off his head and carried it home to his father. The old man was sitting at table, the food lying before him untasted, when Rodrigo returned, and pointing to the head which hung from the horse’s collar, dropping blood, he bade him look up, for there was the herb which should restore to him his appetite.