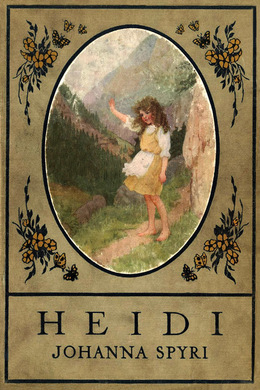 One of the most charming tales in children’s literature, Heidi is the story of a five-year-old orphan who goes to live with her grandfather in the mountains. She soon wins his heart and befriends the young goatherd, Peter. Her happiness ends, however, when her aunt takes her to the city to help take care of a sickly child, Clara. Finally, Heidi brings Clara back to her Alpine home, where a miracle of healing occurs.

The little old town of Mayenfeld is charmingly situated. From it a footpath leads through green, well-wooded stretches to the foot of the heights which look down imposingly upon the valley. Where the footpath begins to go steeply and abruptly up the Alps, the heath, with its short grass and pungent herbage, at once sends out its soft perfume to meet the wayfarer.

One bright sunny morning in June, a tall, vigorous maiden of the mountain region climbed up the narrow path, leading a little girl by the hand. The youngster’s cheeks were in such a glow that it showed even through her sun-browned skin. Small wonder though! for in spite of the heat, the little one, who was scarcely five years old, was bundled up as if she had to brave a bitter frost. Her shape was difficult to distinguish, for she wore two dresses, if not three, and around her shoulders a large red cotton shawl. With her feet encased in heavy hob-nailed boots, this hot and shapeless little person toiled up the mountain.

The pair had been climbing for about an hour when they reached a hamlet half-way up the great mountain named the Alm. This hamlet was called “Im Dörfli” or “The Little Village.” It was the elder girl’s home town, and therefore she was greeted from nearly every house; people called to her from windows and doors, and very often from the road. But, answering questions and calls as she went by, the girl did not loiter on her way and only stood still when she reached the end of the hamlet. There a few cottages lay scattered about, from the furthest of which a voice called out to her through an open door: “Deta, please wait one moment! I am coming with you, if you are going further up.”

When the girl stood still to wait, the child instantly let go her hand and promptly sat down on the ground.

“Are you tired, Heidi?” Deta asked the child.

“We shall be up in an hour, if you take big steps and climb with all your little might!” Thus the elder girl tried to encourage her small companion.

A stout, pleasant-looking woman stepped out of the house and joined the two. The child had risen and wandered behind the old acquaintances, who immediately started gossiping about their friends in the neighborhood and the people of the hamlet generally.

“Where are you taking the child, Deta?” asked the newcomer. “Is she the child your sister left?”

“Yes,” Deta assured her; “I am taking her up to the Alm-Uncle and there I want her to remain.”

“You can’t really mean to take her there Deta. You must have lost your senses, to go to him. I am sure the old man will show you the door and won’t even listen to what you say.”

“Why not? As he’s her grandfather, it is high time he should do something for the child. I have taken care of her until this summer and now a good place has been offered to me. The child shall not hinder me from accepting it, I tell you that!”

“It would not be so hard, if he were like other mortals. But you know him yourself. How could he look after a child, especially such a little one? She’ll never get along with him, I am sure of that!–But tell me of your prospects.”

“I am going to a splendid house in Frankfurt. Last summer some people went off to the baths and I took care of their rooms. As they got to like me, they wanted to take me along, but I could not leave. They have come back now and have persuaded me to go with them.”

“I am glad I am not the child!” exclaimed Barbara with a shudder. “Nobody knows anything about the old man’s life up there. He doesn’t speak to a living soul, and from one year’s end to the other he keeps away from church. People get out of his way when he appears once in a twelve-month down here among us. We all fear him and he is really just like a heathen or an old Indian, with those thick grey eyebrows and that huge uncanny beard. When he wanders along the road with his twisted stick we are all afraid to meet him alone.”

“That is not my fault,” said Deta stubbornly. “He won’t do her any harm; and if he should, he is responsible, not I.”

“I wish I knew what weighs on the old man’s conscience. Why are his eyes so fierce and why does he live up there all alone? Nobody ever sees him and we hear many strange things about him. Didn’t your sister tell you anything, Deta?”

“Of course she did, but I shall hold my tongue. He would make me pay for it if I didn’t.”

Barbara had long been anxious to know something about the old uncle and why he lived apart from everybody. Nobody had a good word for him, and when people talked about him, they did not speak openly but as if they were afraid. She could not even explain to herself why he was called the Alm-Uncle. He could not possibly be the uncle of all the people in the village, but since everybody spoke of him so, she did the same. Barbara, who had only lived in the village since her marriage, was glad to get some information from her friend.