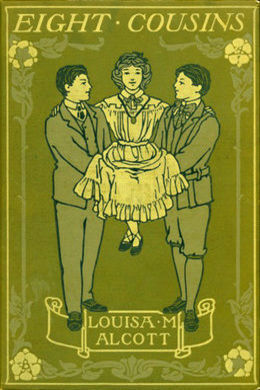 Life with seven boy cousins isn’t quite what Rose expected. Left an orphan after her father’s death, Rose Campbell is sent to live at the “Aunt Hill” with her six aunts and seven rowdy boy cousins. For someone who is used to a girl’s boarding school, it all seems pretty overwhelming. Her guardian, Uncle Alec, makes her eat healthy things like oatmeal, and even tries to get her to give up her pretty dresses for drab, sensible clothes. Will Rose ever get used to her uncle’s crazy notions and all her noisy relatives?

The sequel, Rose in Bloom, is also available.

Rose sat all alone in the big best parlor, with her little handkerchief laid ready to catch the first tear, for she was thinking of her troubles, and a shower was expected. She had retired to this room as a good place in which to be miserable; for it was dark and still, full of ancient furniture, sombre curtains, and hung all around with portraits of solemn old gentlemen in wigs, severe–nosed ladies in top–heavy caps, and staring children in little bob–tailed coats or short–waisted frocks. It was an excellent place for woe; and the fitful spring rain that pattered on the window–pane seemed to sob, “Cry away: I’m with you.”

Rose really did have some cause to be sad; for she had no mother, and had lately lost her father also, which left her no home but this with her great–aunts. She had been with them only a week, and, though the dear old ladies had tried their best to make her happy, they had not succeeded very well, for she was unlike any child they had ever seen, and they felt very much as if they had the care of a low–spirited butterfly.

They had given her the freedom of the house, and for a day or two she had amused herself roaming all over it, for it was a capital old mansion, and was full of all manner of odd nooks, charming rooms, and mysterious passages. Windows broke out in unexpected places, little balconies overhung the garden most romantically, and there was a long upper hall full of curiosities from all parts of the world; for the Campbells had been sea–captains for generations.

Aunt Plenty had even allowed Rose to rummage in her great china closet a spicy retreat, rich in all the “goodies” that children love; but Rose seemed to care little for these toothsome temptations; and when that hope failed, Aunt Plenty gave up in despair.

Gentle Aunt Peace had tried all sorts of pretty needle–work, and planned a doll’s wardrobe that would have won the heart of even an older child. But Rose took little interest in pink satin hats and tiny hose, though she sewed dutifully till her aunt caught her wiping tears away with the train of a wedding–dress, and that discovery put an end to the sewing society.

Then both old ladies put their heads together and picked out the model child of the neighbourhood to come and play with their niece. But Ariadne Blish was the worst failure of all, for Rose could not bear the sight of her, and said she was so like a wax doll she longed to give her a pinch and see if she would squeak. So prim little Ariadne was sent home, and the exhausted aunties left Rose to her own devices for a day or two.

Bad weather and a cold kept her in–doors, and she spent most of her time in the library where her father’s books were stored. Here she read a great deal, cried a little, and dreamed many of the innocent bright dreams in which imaginative children find such comfort and delight. This suited her better than anything else, but it was not good for her, and she grew pale, heavy–eyed and listless, though Aunt Plenty gave her iron enough to make a cooking–stove, and Aunt Peace petted her like a poodle.

Seeing this, the poor aunties racked their brains for a new amusement and determined to venture a bold stroke, though not very hopeful of its success. They said nothing to Rose about their plan for this Saturday afternoon, but let her alone till the time came for the grand surprise, little dreaming that the odd child would find pleasure for herself in a most unexpected quarter.

Before she had time to squeeze out a single tear a sound broke the stillness, making her prick up her ears. It was only the soft twitter of a bird, but it seemed to be a peculiarly gifted bird, for while she listened the soft twitter changed to a lively whistle, then a trill, a coo, a chirp, and ended in a musical mixture of all the notes, as if the bird burst out laughing. Rose laughed also, and, forgetting her woes, jumped up, saying eagerly,

Running down the long hall, she peeped out at both doors, but saw nothing feathered except a draggle–tailed chicken under a burdock leaf. She listened again, and the sound seemed to be in the house. Away she went, much excited by the chase, and following the changeful song, it led her to the china–closet door.

“In there? How funny!” she said. But when she entered, not a bird appeared except the everlastingly kissing swallows on the Canton china that lined the shelves. All of a sudden Rose’s face brightened, and, softly opening the slide, she peered into the kitchen. But the music had stopped, and all she saw was a girl in a blue apron scrubbing the hearth. Rose stared about her for a minute, and then asked abruptly,

“Did you hear that mocking–bird?”

“I should call it a phebe–bird,” answered the girl, looking up with a twinkle in her black eyes.