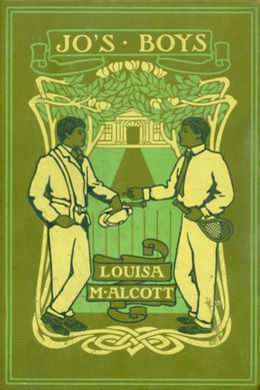 How They Turned Out

This sequel to Louisa May Alcott’s Little Women and Little Men chronicles the return of the classmates of Plumfield, Jo’s school for boys. Ten years after the events of Little Men, readers reencounter Nat, the orphaned street musician, now a conservatory student; restless Dan, back from the gold mines of California; business-minded Tom, a reluctant medical student; sailor Emil, home from the sea; and other old friends. Alcott’s sensitive and sympathetic portrayals of young adults make her novels a delight for readers of all ages.

‘If anyone had told me what wonderful changes were to take place here in ten years, I wouldn’t have believed it,’ said Mrs Jo to Mrs Meg, as they sat on the piazza at Plumfield one summer day, looking about them with faces full of pride and pleasure.

‘This is the sort of magic that money and kind hearts can work. I am sure Mr Laurence could have no nobler monument than the college he so generously endowed; and a home like this will keep Aunt March’s memory green as long as it lasts,’ answered Mrs Meg, always glad to praise the absent.

‘We used to believe in fairies, you remember, and plan what we’d ask for if we could have three wishes. Doesn’t it seem as if mine had been really granted at last? Money, fame, and plenty of the work I love,’ said Mrs Jo, carelessly rumpling up her hair as she clasped her hands over her head just as she used to do when a girl.

‘I have had mine, and Amy is enjoying hers to her heart’s content. If dear Marmee, John, and Beth were here, it would be quite perfect,’ added Meg, with a tender quiver in her voice; for Marmee’s place was empty now.

Jo put her hand on her sister’s, and both sat silent for a little while, surveying the pleasant scene before them with mingled sad and happy thoughts.

It certainly did look as if magic had been at work, for quiet Plumfield was transformed into a busy little world. The house seemed more hospitable than ever, refreshed now with new paint, added wings, well–kept lawn and garden, and a prosperous air it had not worn when riotous boys swarmed everywhere and it was rather difficult for the Bhaers to make both ends meet. On the hill, where kites used to be flown, stood the fine college which Mr Laurence’s munificent legacy had built. Busy students were going to and fro along the paths once trodden by childish feet, and many young men and women were enjoying all the advantages that wealth, wisdom, and benevolence could give them.

Just inside the gates of Plumfield a pretty brown cottage, very like the Dovecote, nestled among the trees, and on the green slope westward Laurie’s white–pillared mansion glittered in the sunshine; for when the rapid growth of the city shut in the old house, spoilt Meg’s nest, and dared to put a soap–factory under Mr Laurence’s indignant nose, our friends emigrated to Plumfield, and the great changes began.

These were the pleasant ones; and the loss of the dear old people was sweetened by the blessings they left behind; so all prospered now in the little community, and Mr Bhaer as president, and Mr March as chaplain of the college, saw their long–cherished dream beautifully realized. The sisters divided the care of the young people among them, each taking the part that suited her best. Meg was the motherly friend of the young women, Jo the confidante and defender of all the youths, and Amy the lady Bountiful who delicately smoothed the way for needy students, and entertained them all so cordially that it was no wonder they named her lovely home Mount Parnassus, so full was it of music, beauty, and the culture hungry young hearts and fancies long for.

The original twelve boys had of course scattered far and wide during these years, but all that lived still remembered old Plumfield, and came wandering back from the four quarters of the earth to tell their various experiences, laugh over the pleasures of the past, and face the duties of the present with fresh courage; for such home–comings keep hearts tender and hands helpful with the memories of young and happy days. A few words will tell the history of each, and then we can go on with the new chapter of their lives.

Franz was with a merchant kinsman in Hamburg, a man of twenty–six now, and doing well. Emil was the jolliest tar that ever ‘sailed the ocean blue’. His uncle sent him on a long voyage to disgust him with this adventurous life; but he came home so delighted with it that it was plain this was his profession, and the German kinsman gave him a good chance in his ships; so the lad was happy. Dan was a wanderer still; for after the geological researches in South America he tried sheep–farming in Australia, and was now in California looking up mines. Nat was busy with music at the Conservatory, preparing for a year or two in Germany to finish him off. Tom was studying medicine and trying to like it. Jack was in business with his father, bent on getting rich. Dolly was in college with Stuffy and Ned reading law. Poor little Dick was dead, so was Billy; and no one could mourn for them, since life would never be happy, afflicted as they were in mind and body.

Rob and Teddy were called the ‘Lion and the Lamb’; for the latter was as rampant as the king of beasts, and the former as gentle as any sheep that ever baaed. Mrs Jo called him ‘my daughter’, and found him the most dutiful of children, with plenty of manliness underlying the quiet manners and tender nature”