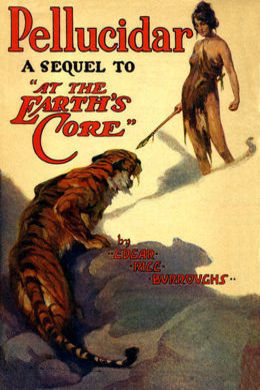 In this sequel to At the Earth’s Core, David Innes vows revenge and returns to the Inner World of Pellucidar to rescue the beautiful Dian, who had been torn from his arms by trickery. However, his return trip places him far from the land of his beloved and he is forced to undertake a desperate journey thousands of miles across the fierce inner earth to reach her. David’s epic voyage takes him through the many strange lands of Pellucidar, including the pendant moon and Land of Awful Shadow. His heart pounding encounters with primeval beasts and extraordinary peoples makes Pellucidar one of the best adventure stories ever penned by Edgar Rice Burroughs.

The Arabs, of whom I wrote you at the end of my last letter (Innes began), and whom I thought to be enemies intent only upon murdering me, proved to be exceedingly friendly–they were searching for the very band of marauders that had threatened my existence. The huge rhamphorhynchus-like reptile that I had brought back with me from the inner world–the ugly Mahar that Hooja the Sly One had substituted for my dear Dian at the moment of my departure–filled them with wonder and with awe.

Nor less so did the mighty subterranean prospector which had carried me to Pellucidar and back again, and which lay out in the desert about two miles from my camp.

With their help I managed to get the unwieldy tons of its great bulk into a vertical position–the nose deep in a hole we had dug in the sand and the rest of it supported by the trunks of date-palms cut for the purpose.

It was a mighty engineering job with only wild Arabs and their wilder mounts to do the work of an electric crane–but finally it was completed, and I was ready for departure.

For some time I hesitated to take the Mahar back with me. She had been docile and quiet ever since she had discovered herself virtually a prisoner aboard the “iron mole.” It had been, of course, impossible for me to communicate with her since she had no auditory organs and I no knowledge of her fourth-dimension, sixth-sense method of communication.

Naturally I am kind-hearted, and so I found it beyond me to leave even this hateful and repulsive thing alone in a strange and hostile world. The result was that when I entered the iron mole I took her with me.

That she knew that we were about to return to Pellucidar was evident, for immediately her manner changed from that of habitual gloom that had pervaded her, to an almost human expression of contentment and delight.

Our trip through the earth’s crust was but a repetition of my two former journeys between the inner and the outer worlds. This time, however, I imagine that we must have maintained a more nearly perpendicular course, for we accomplished the journey in a few minutes’ less time than upon the occasion of my first journey through the five-hundred-mile crust. Just a trifle less than seventy-two hours after our departure into the sands of the Sahara, we broke through the surface of Pellucidar.

Fortune once again favored me by the slightest of margins, for when I opened the door in the prospector’s outer jacket I saw that we had missed coming up through the bottom of an ocean by but a few hundred yards.

The aspect of the surrounding country was entirely unfamiliar to me–I had no conception of precisely where I was upon the one hundred and twenty-four million square miles of Pellucidar’s vast land surface.

The perpetual midday sun poured down its torrid rays from zenith, as it had done since the beginning of Pellucidarian time–as it would continue to do to the end of it. Before me, across the wide sea, the weird, horizonless seascape folded gently upward to meet the sky until it lost itself to view in the azure depths of distance far above the level of my eyes.

How strange it looked! How vastly different from the flat and puny area of the circumscribed vision of the dweller upon the outer crust!

I was lost. Though I wandered ceaselessly throughout a lifetime, I might never discover the whereabouts of my former friends of this strange and savage world. Never again might I see dear old Perry, nor Ghak the Hairy One, nor Dacor the Strong One, nor that other infinitely precious one–my sweet and noble mate, Dian the Beautiful!

But even so I was glad to tread once more the surface of Pellucidar. Mysterious and terrible, grotesque and savage though she is in many of her aspects, I can not but love her. Her very savagery appealed to me, for it is the savagery of unspoiled Nature.

The magnificence of her tropic beauties enthralled me. Her mighty land areas breathed unfettered freedom.

Her untracked oceans, whispering of virgin wonders unsullied by the eye of man, beckoned me out upon their restless bosoms.

Not for an instant did I regret the world of my nativity. I was in Pellucidar. I was home. And I was content.

As I stood dreaming beside the giant thing that had brought me safely through the earth’s crust, my traveling companion, the hideous Mahar, emerged from the interior of the prospector and stood beside me. For a long time she remained motionless.

What thoughts were passing through the convolutions of her reptilian brain?

I do not know.

She was a member of the dominant race of Pellucidar. By a strange freak of evolution her kind had first developed the power of reason in that world of anomalies.