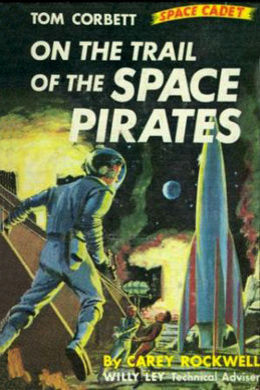 On the Trail of the Space Pirates

This, the third book in the Tom Corbett series by “Carey Rockwell” (whoever he was in real life) is, like all of the Tom Corbett books, something special. It’s another tale of the three young men who serve in the Solar Guard as Space Cadets. And this tale of the cadets’ adventures is a story you’ve got to love, too. We mean, Space Pirates! Space Pirates! How cool can you get? There’s an Energy Lock Formula that allows the Space Pirates (shiver me space-timbers, matey!) to rob spaceships at will. The Polaris crew must go underground to find the stolen formula…!

A metallic voice rasped over the loud-speakers and echoed through the lofty marble and aluminum concourse of the New Chicago Monorail Terminal. “Atom City express on Track Seven! Space Academy first stop! Passengers for Space Academy will please take seats in the first six cars!”

As the crowd of people waiting in the concourse surged through the gate leading to Track Seven, three boys in the royal-blue uniforms of the Space Cadet Corps slowly picked up their plastic space bags and joined the mass of travelers.

Wearily, they drifted with the crowd and stepped on the slidestairs leading down to the monorail platform. In the lead, Tom Corbett, the command cadet of the unit, a tall, curly-haired boy of eighteen, slouched against the handrail and looked back at his two unit-mates, Roger Manning and Astro. Manning, a slender cadet, with close-cropped blond hair, was yawning and blinking his eyes sleepily, while Astro, the third member of the unit, a head taller than either of his unit-mates and fifty pounds heavier, stood flat-footed on the step, eyes closed, his giant bulk swaying slightly with the motion of the slidestairs.

“Huh! A real snappy unit!” Tom muttered to himself.

“Hmmm? What?” Roger blinked and stared bleary-eyed at Tom.

“Nothing, Roger,” Tom replied. “I only hope you guys can stay awake long enough to get on the monorail.”

“It’s your own fault, Tom,” rumbled Astro in his bull-like voice. “If your family hadn’t thrown so many parties for us while we were on leave, we’d have had more sleep.”

“I didn’t hear any complaints then,” snorted Tom. “Just get into the car before you cork off, will you? I’m in no shape to carry you.”

Seconds later, the slidestairs deposited the three boys on the platform and they slowly made their way through the crowd toward the forward cars of the monorail. Entering the third car, they found three seats together and collapsed into their luxurious softness.

“Oh, brother!” Tom groaned as he curled himself into the cushions, “I’m going to sleep all the way to the Academy.”

“I’m asleep already,” mumbled Roger, his voice muffled by his cap pulled low over his face.

“Can’t help it,” calmly answered Astro. “I’m a big guy, that’s all.” He began digging through his space bag for an apple Mrs. Corbett had thoughtfully provided.

Tom finally stirred and sat up. He had learned a long time ago the futility of trying to deny Astro’s Gargantuan appetite. “There’s a dining car on this section of the monorail, Astro,” he said, slapping a crumpled mass of credits into the Venusian’s hamlike hand. “Here. Have yourself a good time.” He slumped back in his seat and closed his eyes.

“Yeah,” growled Roger, “and when you come back, don’t make any noise!”

Astro smiled. He got up carefully and climbed over his two sleeping mates. Standing in the aisle, he counted the credits Tom had given him and turned to the front of the car. Suddenly a heavy voice growled behind him.

A hand grabbed him by the shoulder and pushed him to one side. Caught off balance, Astro fell back on his sleeping unit-mates.

“Hey! What th–” stuttered Astro as he sprawled on top of his friends. The two sleepy cadets came up howling.

“Astro! What in blazes do you think you’re doing?” roared Tom.

“Why, you space-brained idiot,” yelled Roger, “I ought to lay one on your chin!”

There was a tangle of arms and legs and finally the three cadets struggled to their feet. Astro turned to see who had pushed him.

Two men standing at the end of the car grinned back at him.

“It was those two guys at the end of the car,” explained Astro. “They pushed me!” He lumbered toward them, followed by Tom and Roger.

Stopping squarely in front of them, he demanded, “What’s the big idea?”

“Go back to your beauty rest, spaceboy!” jeered the heavier of the two men and turned to his companion, adding with a snarl, “How do you like his nerve? We not only have to pay taxes to support these lazy kids and teach them how to be spacemen, but they’re loud-mouthed and sassy on top of it!”

The other man, smaller and rat-faced, laughed. “Yeah, we oughta report them to their little soldier bosses at Space Academy.”

Astro suddenly balled his fists and stepped forward, but Tom grabbed his arm and pulled him back while Roger eased himself between his mates and the two grinning men.