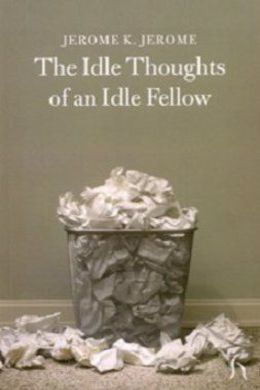 Idle Thoughts of an Idle Fellow

Published in 1886 and dedicated to the writer’s ally in idling—his pipe—this collection of entertaining essays established Jerome K. Jerome as an eminent English wit. “What readers ask nowadays in a book is that it should improve, instruct, and elevate. This book wouldn’t elevate a cow. I cannot conscientiously recommend it for any useful purposes whatever. All I can suggest is that when you get tired of reading ‘the best hundred books,’ you may take this up for half an hour. It will be a change.” Here are his idle and amusing thoughts on all aspects of life—from love to poverty, vanity to ambition, babies to cats and dogs—and, of course, on the pleasures of spending one’s time idling.

Now, this is a subject on which I flatter myself I really am au fait. The gentleman who, when I was young, bathed me at wisdom’s font for nine guineas a term—no extras—used to say he never knew a boy who could do less work in more time; and I remember my poor grandmother once incidentally observing, in the course of an instruction upon the use of the Prayer–book, that it was highly improbable that I should ever do much that I ought not to do, but that she felt convinced beyond a doubt that I should leave undone pretty well everything that I ought to do.

I am afraid I have somewhat belied half the dear old lady’s prophecy. Heaven help me! I have done a good many things that I ought not to have done, in spite of my laziness. But I have fully confirmed the accuracy of her judgment so far as neglecting much that I ought not to have neglected is concerned. Idling always has been my strong point. I take no credit to myself in the matter—it is a gift. Few possess it. There are plenty of lazy people and plenty of slow–coaches, but a genuine idler is a rarity. He is not a man who slouches about with his hands in his pockets. On the contrary, his most startling characteristic is that he is always intensely busy.

It is impossible to enjoy idling thoroughly unless one has plenty of work to do. There is no fun in doing nothing when you have nothing to do. Wasting time is merely an occupation then, and a most exhausting one. Idleness, like kisses, to be sweet must be stolen.

Many years ago, when I was a young man, I was taken very ill—I never could see myself that much was the matter with me, except that I had a beastly cold. But I suppose it was something very serious, for the doctor said that I ought to have come to him a month before, and that if it (whatever it was) had gone on for another week he would not have answered for the consequences. It is an extraordinary thing, but I never knew a doctor called into any case yet but what it transpired that another day’s delay would have rendered cure hopeless. Our medical guide, philosopher, and friend is like the hero in a melodrama—he always comes upon the scene just, and only just, in the nick of time. It is Providence, that is what it is.

Well, as I was saying, I was very ill and was ordered to Buxton for a month, with strict injunctions to do nothing whatever all the while that I was there. “Rest is what you require,” said the doctor, “perfect rest.”

It seemed a delightful prospect. “This man evidently understands my complaint,” said I, and I pictured to myself a glorious time—a four weeks’ dolce far niente with a dash of illness in it. Not too much illness, but just illness enough—just sufficient to give it the flavor of suffering and make it poetical. I should get up late, sip chocolate, and have my breakfast in slippers and a dressing–gown. I should lie out in the garden in a hammock and read sentimental novels with a melancholy ending, until the books should fall from my listless hand, and I should recline there, dreamily gazing into the deep blue of the firmament, watching the fleecy clouds floating like white–sailed ships across its depths, and listening to the joyous song of the birds and the low rustling of the trees. Or, on becoming too weak to go out of doors, I should sit propped up with pillows at the open window of the ground–floor front, and look wasted and interesting, so that all the pretty girls would sigh as they passed by.

And twice a day I should go down in a Bath chair to the Colonnade to drink the waters. Oh, those waters! I knew nothing about them then, and was rather taken with the idea. “Drinking the waters” sounded fashionable and Queen Anne–fied, and I thought I should like them. But, ugh! after the first three or four mornings! Sam Weller’s description of them as “having a taste of warm flat–irons” conveys only a faint idea of their hideous nauseousness. If anything could make a sick man get well quickly, it would be the knowledge that he must drink a glassful of them every day until he was recovered. I drank them neat for six consecutive days, and they nearly killed me; but after then I adopted the plan of taking a stiff glass of brandy–and–water immediately on the top of them, and found much relief thereby. I have been informed since, by various eminent medical gentlemen, that the alcohol must have entirely counteracted the effects of the chalybeate properties contained in the water. I am glad I was lucky enough to hit upon the right thing.

But “drinking the waters” was only a small portion of the torture I experienced during that memorable month—a month which was, without exception, the most miserable I have ever spent. During the best part of it I religiously followed the doctor’s mandate and did nothing whatever, except moon about the house and garden and go out for two hours a day in a Bath chair.