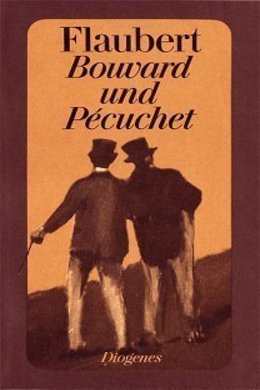 A Tragi-comic Novel of Bourgeois Life

Nowhere do Flaubert’s explorations of the relation of signs to the objects they signify reach a more thorough study than in this work. Bouvard and Pécuchet systematically confuse signs and symbols with reality, an assumption that causes them much suffering, as it does for Emma Bovary and Frédéric Moreau. Yet here, due to the explicit focus on books and knowledge, Flaubert’s ideas reach a climax. Consequently, the book is widely read as a precursor to modern theories on semiotics and postmodernism. The relentless failure of Bouvard and Pécuchet to learn anything from their adventures raises the question of what is knowable. Whenever they achieve some small measure of success (a rare occurrence), it is the result of unknown external forces beyond their comprehension. In this sense, they strongly resemble Antony in The Temptation of St. Anthony, a work which addresses similar epistemological themes as they relate to classical literature. Lionel Trilling wrote that the novel expresses a belief in the alienation of human thought from human experience. The worldview that emerges from the work, one of human beings proceeding relentlessly forward without comprehending the results of their actions or the processes of the world around them, does not seem an optimistic one. But given that Bouvard and Pécuchet do gain some comprehension of humanity’s ignorant state (as demonstrated by their composition of the Dictionary of Received Ideas), it could be argued that Flaubert allows for the possibility of relative enlightenment. (source: Wikipedia)

As there were thirty-three degrees of heat the Boulevard Bourdon was absolutely deserted.

Farther down, the Canal St. Martin, confined by two locks, showed in a straight line its water black as ink. In the middle of it was a boat, filled with timber, and on the bank were two rows of casks.

Beyond the canal, between the houses which separated the timber-yards, the great pure sky was cut up into plates of ultramarine; and under the reverberating light of the sun, the white façades, the slate roofs, and the granite wharves glowed dazzlingly. In the distance arose a confused noise in the warm atmosphere; and the idleness of Sunday, as well as the melancholy engendered by the summer heat, seemed to shed around a universal languor.

Two men made their appearance.

One came from the direction of the Bastille; the other from that of the Jardin des Plantes. The taller of the pair, arrayed in linen cloth, walked with his hat back, his waistcoat unbuttoned, and his cravat in his hand. The smaller, whose form was covered with a maroon frock-coat, wore a cap with a pointed peak.

As soon as they reached the middle of the boulevard, they sat down, at the same moment, on the same seat.

In order to wipe their foreheads they took off their headgear, each placing his beside himself; and the little man saw “Bouvard” written in his neighbour’s hat, while the latter easily traced “Pécuchet” in the cap of the person who wore the frock-coat.

“Look here!” he said; “we have both had the same idea–to write our names in our head-coverings!”

“Yes, faith, for they might carry off mine from my desk.”

Then they gazed at each other. Bouvard’s agreeable visage quite charmed Pécuchet.

His blue eyes, always half-closed, smiled in his fresh-coloured face. His trousers, with big flaps, which creased at the end over beaver shoes, took the shape of his stomach, and made his shirt bulge out at the waist; and his fair hair, which of its own accord grew in tiny curls, gave him a somewhat childish look.

He kept whistling continually with the tips of his lips.

Bouvard was struck by the serious air of Pécuchet. One would have thought that he wore a wig, so flat and black were the locks which adorned his high skull. His face seemed entirely in profile, on account of his nose, which descended very low. His legs, confined in tight wrappings of lasting, were entirely out of proportion with the length of his bust. His voice was loud and hollow.

This exclamation escaped him:

“How pleasant it would be in the country!”

But, according to Bouvard, the suburbs were unendurable on account of the noise of the public-houses outside the city. Pécuchet was of the same opinion. Nevertheless, he was beginning to feel tired of the capital, and so was Bouvard.

And their eyes wandered over heaps of stones for building, over the hideous water in which a truss of straw was floating, over a factory chimney rising towards the horizon. Sewers sent forth their poisonous exhalations. They turned to the opposite side; and they had in front of them the walls of the Public Granary.

Decidedly (and Pécuchet was surprised at the fact), it was still warmer in the street than in his own house. Bouvard persuaded him to put down his overcoat. As for him, he laughed at what people might say about him.

Suddenly, a drunken man staggered along the footpath; and the pair began a political discussion on the subject of working-men. Their opinions were similar, though perhaps Bouvard was rather more liberal in his views.

A noise of wheels sounded on the pavement amid a whirlpool of dust. It turned out to be three hired carriages which were going towards Bercy, carrying a bride with her bouquet, citizens in white cravats, ladies with their petticoats huddled up so as almost to touch their armpits, two or three little girls, and a student.

The sight of this wedding-party led Bouvard and Pécuchet to talk about women, whom they declared to be frivolous, waspish, obstinate. In spite of this, they were often better than men; but at other times they were worse. In short, it was better to live without them. For his part, Pécuchet was a bachelor.

“Perhaps you are lucky there. But, in the long run, solitude is very sad.”

Then, on the edge of the wharf, appeared a girl of the town with a soldier,–sallow, with black hair, and marked with smallpox. She leaned on the soldier’s arm, dragging her feet along, and swaying on her hips.

When she was a short distance from them, Bouvard indulged in a coarse remark. Pécuchet became very red in the face, and, no doubt to avoid answering, gave him a look to indicate the fact that a priest was coming in their direction.