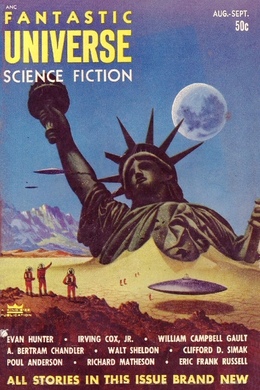 All Cats Are Gray

Under normal conditions a whole person has a decided advantage over a handicapped one. But out in deep space the normal may be reversed–for humans at any rate. Steena is a computer programmer who spends her life in the background, a woman in plain gray clothing who speaks little but her knowledge of odd bits of spacer’s lore has saved lives and made fortunes.

Steena of the spaceways–that sounds just like a corny title for one of the Stellar-Vedo spreads. I ought to know, I’ve tried my hand at writing enough of them. Only this Steena was no glamour babe. She was as colorless as a Lunar plant–even the hair netted down to her skull had a sort of grayish cast and I never saw her but once draped in anything but a shapeless and baggy gray space-all.

Steena was strictly background stuff and that is where she mostly spent her free hours–in the smelly smoky background corners of any stellar-port dive frequented by free spacers. If you really looked for her you could spot her–just sitting there listening to the talk–listening and remembering. She didn’t open her own mouth often. But when she did spacers had learned to listen. And the lucky few who heard her rare spoken words–these will never forget Steena.

She drifted from port to port. Being an expert operator on the big calculators she found jobs wherever she cared to stay for a time. And she came to be something like the master-minded machines she tended–smooth, gray, without much personality of her own.

But it was Steena who told Bub Nelson about the Jovan moon-rites–and her warning saved Bub’s life six months later. It was Steena who identified the piece of stone Keene Clark was passing around a table one night, rightly calling it unworked Slitite. That started a rush which made ten fortunes overnight for men who were down to their last jets. And, last of all, she cracked the case of the Empress of Mars.

All the boys who had profited by her queer store of knowledge and her photographic memory tried at one time or another to balance the scales. But she wouldn’t take so much as a cup of Canal water at their expense, let alone the credits they tried to push on her. Bub Nelson was the only one who got around her refusal. It was he who brought her Bat.

About a year after the Jovan affair he walked into the Free Fall one night and dumped Bat down on her table. Bat looked at Steena and growled. She looked calmly back at him and nodded once. From then on they traveled together–the thin gray woman and the big gray tom-cat. Bat learned to know the inside of more stellar bars than even most spacers visit in their lifetimes. He developed a liking for Vernal juice, drank it neat and quick, right out of a glass. And he was always at home on any table where Steena elected to drop him.

This is really the story of Steena, Bat, Cliff Moran and the Empress of Mars, a story which is already a legend of the spaceways. And it’s a damn good story too. I ought to know, having framed the first version of it myself.

For I was there, right in the Rigel Royal, when it all began on the night that Cliff Moran blew in, looking lower than an antman’s belly and twice as nasty. He’d had a spell of luck foul enough to twist a man into a slug-snake and we all knew that there was an attachment out for his ship. Cliff had fought his way up from the back courts of Venaport. Lose his ship and he’d slip back there–to rot. He was at the snarling stage that night when he picked out a table for himself and set out to drink away his troubles.

However, just as the first bottle arrived, so did a visitor. Steena came out of her corner, Bat curled around her shoulders stole-wise, his favorite mode of travel. She crossed over and dropped down without invitation at Cliff’s side. That shook him out of his sulks. Because Steena never chose company when she could be alone. If one of the man-stones on Ganymede had come stumping in, it wouldn’t have made more of us look out of the corners of our eyes.

She stretched out one long-fingered hand and set aside the bottle he had ordered and said only one thing, “It’s about time for the Empress of Mars to appear again.”