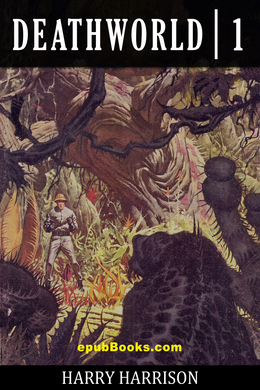 Deathworld centres on Jason dinAlt, a professional gambler who uses his somewhat erratic psionic abilities to tip the odds in his favour. He is challenged by a man named Kerk Pyrrus (who turns out to be the ambassador from the planet Pyrrus) to turn a large amount of money into an immense sum by gambling at a government-run casino. He succeeds and survives the planetary government’s desperate efforts to steal back the money. In a fit of ennui, he decides to accompany Kerk to his home, despite being warned that it is the deadliest world ever colonized by humans…DEATHWORLD! This is one of the classics of the Golden Age of science fiction, born in the pages of Astounding Science Fiction under the editorship of John W. Campbell, Jr.

Jason dinAlt sprawled in soft luxury on the couch, a large frosty stein held limply in one hand. His other hand rested casually on a pillow. The gun behind the pillow was within easy reach of his fingers. In his line of work he never took chances.

It was all highly suspicious. Jason didn’t know a soul on this planet. Yet the card sent by service tube from the hotel desk had read: Kerk Pyrrus would like to see Jason dinAlt. Blunt and to the point. He signaled the desk to send the man up, then lowered his fingers a bit until they brushed the gun butt. The door slid open and his visitor stepped through.

A retired wrestler. That was Jason’s first thought. Kerk Pyrrus was a gray-haired rock of a man. His body seemingly chiseled out of flat slabs of muscle. Then Jason saw the gun strapped to the inside of the other man’s forearm, and he let his fingers drop casually behind the pillow.

“I’d appreciate it,” Jason said, “if you’d take off your gun while you’re in here.” The other man stopped and scowled down at the gun as if he was seeing it for the first time.

“No, I never take it off.” He seemed mildly annoyed by the suggestion.

Jason had his fingers on his own gun when he said, “I’m afraid I’ll have to insist. I always feel a little uncomfortable around people who wear guns.” He kept talking to distract attention while he pulled out his gun. Fast and smooth.

He could have been moving in slow motion for all the difference it made. Kerk Pyrrus stood rock still while the gun came out, while it swung in his direction. Not until the very last instant did he act. When he did, the motion wasn’t visible. First his gun was in the arm holster–then it was aimed between Jason’s eyes. It was an ugly, heavy weapon with a pitted front orifice that showed plenty of use.

And Jason knew if he swung his own weapon up a fraction of an inch more he would be dead. He dropped his arm carefully and Kerk flipped his own gun back in the holster with the same ease he had drawn it.

“Now,” the stranger said, “if we’re through playing, let’s get down to business. I have a proposition for you.”

Jason downed a large mouthful from the mug and bridled his temper. He was fast with a gun–his life had depended on it more than once–and this was the first time he had been outdrawn. It was the offhand, unimportant manner it had been done that irritated him.

“I’m not prepared to do business,” he said acidly. “I’ve come to Cassylia for a vacation, get away from work.”

“Let’s not fool each other, dinAlt,” Kerk said impatiently. “You’ve never worked at an honest job in your entire life. You’re a professional gambler and that’s why I’m here to see you.”

Jason forced down his anger and threw the gun to the other end of the couch so he wouldn’t be tempted to commit suicide. He had hoped no one knew him on Cassylia and was looking forward to a big kill at the Casino. He would worry about that later. This weight-lifter type seemed to know all the answers. Let him plot the course for a while and see where it led.

“All right, what do you want?”

Kerk dropped into a chair that creaked ominously under his weight, and dug an envelope out of one pocket. He flipped through it quickly and dropped a handful of gleaming Galactic Exchange notes onto the table. Jason glanced at them–then sat up suddenly.

“What are they–forgeries?” he asked, holding one up to the light.

“They’re real enough,” Kerk told him, “I picked them up at the bank. Exactly twenty-seven bills–or twenty-seven million credits. I want you to use them as a bankroll when you go to the Casino tonight. Gamble with them and win.”

They looked real enough–and they could be checked. Jason fingered them thoughtfully while he examined the other man.

“I don’t know what you have in mind,” he said. “But you realize I can’t make any guarantees. I gamble–but I don’t always win …”

“You gamble–and you win when you want to,” Kerk said grimly. “We looked into that quite carefully before I came to you.”

“If you mean to say that I cheat–” Carefully, Jason grabbed his temper again and held it down. There was no future in getting annoyed.

Kerk continued in the same level voice, ignoring Jason’s growing anger. “Maybe you don’t call it cheating, frankly I don’t care. As far as I’m concerned you could have your suit lined with aces and electromagnets in your boots. As long as you won. I’m not here to discuss moral points with you. I said I had a proposition.

“We have worked hard for that money–but it still isn’t enough. To be precise, we need three billion credits. The only way to get that sum is by gambling–with these twenty-seven million as bankroll.”

“And what do I get out of it?” Jason asked the question coolly, as if any bit of the fantastic proposition made sense.