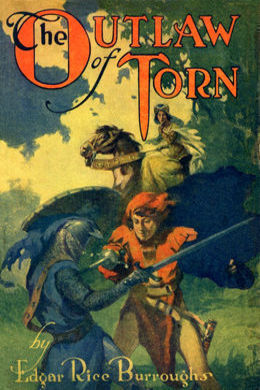 The Outlaw of Torn

The kidnapped prince is trained to fight, so he will someday kill his own father–the king. But the plan goes awry as the prince befriends an old monk who teaches him the rules of chivalry. A thrilling and unusual tale from the author of Tarzan. Newly designed and typeset for easy reading by Boomer Books.

Here is a story that has lain dormant for seven hundred years. At first it was suppressed by one of the Plantagenet kings of England. Later it was forgotten. I happened to dig it up by accident. The accident being the relationship of my wife’s cousin to a certain Father Superior in a very ancient monastery in Europe.

He let me pry about among a quantity of mildewed and musty manuscripts and I came across this. It is very interesting–partially since it is a bit of hitherto unrecorded history, but principally from the fact that it records the story of a most remarkable revenge and the adventurous life of its innocent victim–Richard, the lost prince of England.

In the retelling of it, I have left out most of the history. What interested me was the unique character about whom the tale revolves–the visored horseman who–but let us wait until we get to him.

It all happened in the thirteenth century, and while it was happening, it shook England from north to south and from east to west; and reached across the channel and shook France. It started, directly, in the London palace of Henry III, and was the result of a quarrel between the King and his powerful brother-in-law, Simon de Montfort, Earl of Leicester.

Never mind the quarrel, that’s history, and you can read all about it at your leisure. But on this June day in the year of our Lord 1243, Henry so forgot himself as to very unjustly accuse De Montfort of treason in the presence of a number of the King’s gentlemen.

De Montfort paled. He was a tall, handsome man, and when he drew himself to his full height and turned those gray eyes on the victim of his wrath, as he did that day, he was very imposing. A power in England, second only to the King himself, and with the heart of a lion in him, he answered the King as no other man in all England would have dared answer him.

“My Lord King,” he cried, “that you be my Lord King alone prevents Simon de Montfort from demanding satisfaction for such a gross insult. That you take advantage of your kingship to say what you would never dare say were you not king, brands me not a traitor, though it does brand you a coward.”

Tense silence fell upon the little company of lords and courtiers as these awful words fell from the lips of a subject, addressed to his king. They were horrified, for De Montfort’s bold challenge was to them but little short of sacrilege.

Henry, flushing in mortification and anger, rose to advance upon De Montfort, but suddenly recollecting the power which he represented, he thought better of whatever action he contemplated and, with a haughty sneer, turned to his courtiers.

“Come, my gentlemen,” he said, “methought that we were to have a turn with the foils this morning. Already it waxeth late. Come, De Fulm! Come, Leybourn!” and the King left the apartment followed by his gentlemen, all of whom had drawn away from the Earl of Leicester when it became apparent that the royal displeasure was strong against him. As the arras fell behind the departing King, De Montfort shrugged his broad shoulders, and turning, left the apartment by another door.

When the King, with his gentlemen, entered the armory he was still smarting from the humiliation of De Montfort’s reproaches, and as he laid aside his surcoat and plumed hat to take the foils with De Fulm, his eyes alighted on the master of fence, Sir Jules de Vac, who was advancing with the King’s foil and helmet. Henry felt in no mood for fencing with De Fulm, who, like the other sycophants that surrounded him, always allowed the King easily to best him in every encounter.

De Vac he knew to be too jealous of his fame as a swordsman to permit himself to be overcome by aught but superior skill, and this day Henry felt that he could best the devil himself.

The armory was a great room on the main floor of the palace, off the guard room. It was built in a small wing of the building so that it had light from three sides. In charge of it was the lean, grizzled, leather-skinned Sir Jules de Vac, and it was he whom Henry commanded to face him in mimic combat with the foils, for the King wished to go with hammer and tongs at someone to vent his suppressed rage.

So he let De Vac assume to his mind’s eye the person of the hated De Montfort, and it followed that De Vac was nearly surprised into an early and mortifying defeat by the King’s sudden and clever attack.

Henry III had always been accounted a good swordsman, but that day he quite outdid himself and, in his imagination, was about to run the pseudo De Montfort through the heart, to the wild acclaim of his audience. For this fell purpose he had backed the astounded De Vac twice around the hall when, with a clever feint, and backward step, the master of fence drew the King into the position he wanted him, and with the suddenness of lightning, a little twist of his foil sent Henry’s weapon clanging across the floor of the armory.