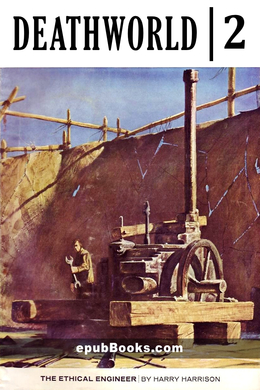 Jason is kidnapped by a self-righteous enemy out to bring him to justice for his various crimes. He forces a crash-landing on a planet where the human population has regressed. The technology is extremely primitive and knowledge is split up among many small clans, each one jealously monopolizing what it knows. Jason uses his ingenuity to survive, trading his knowledge for protection and power in one of these clans. He constructs a device that is a primitive communication device in disguise; it eventually signals his location to a spaceship piloted by his Pyrran girlfriend, Meta. (source: Wikipedia)

Jason dinAlt looked unhappily at the two stretchers as they were carried by. “Are they at it again?” he asked.

Brucco nodded, the scowl permanently ingrained now on his hawklike face. “We have only one thing to be thankful for. That is–so far at least–they haven’t used any weapons on each other.”

Jason looked down unbelievingly at the shredded clothing, crushed flesh and broken bones. “The absence of weapons doesn’t appear to make much difference when two Pyrrans start fighting. It seems impossible that this damage could be administered bare-handed.”

“Well it was. Even you should know that much about Pyrrus by now. We take our fighting very seriously. But they never think how much more work it makes for me. Now I have to patch these two idiots up and try to find room for them in the ward.” He stalked away, irritated and annoyed as always. Jason usually laughed at the doctor’s irascible state, but not today.

Today, and for some days past, he had found himself living with a persistent feeling of irritation, that had arrived at the same time as his discovery that it is far easier to fight a war than to administer a peace. The battle at the perimeter still continued, since the massed malevolence of the Pyrran life forms were not going to call a truce simply because the two warring groups of humans had done so. There was battle on the perimeter and a continual feeling of unrest inside the city. So far there had been very little traffic between the city Pyrrans and those living outside the walls, and what contact there had been usually led to the kind of violence he had just witnessed. The only minor note of hope in this concert of discord was the fact that no one had died–as yet–in any of these fearsome hand-to-hand conflicts. In spite of the apparent deadliness of the encounters all of the Pyrrans seemed to understand that, despite past hatreds, they were all really on the same side. A distant rumble from the clouded sky broke through his thoughts.

“There is a ship on the radar,” Meta said, coming out of the ground-control office and squinting up at the overcast. “I wonder if it is that ecology expedition that Brucco arranged–or the cargo ship from Ondion?”

“We’ll find out in a few minutes,” Jason said, happy to forget his troubles for the moment in frank admiration, since just looking at Meta was enough to put a golden edge on this gloom-filled day. Standing there, head back searching the sky, she managed to be beautiful even in the formless Pyrran coverall. Jason put his arms around her waist and exacted a great deal of pleasure from kissing the golden length of her up-stretched throat.

“Oh, Jason … not now,” she said in exasperation. Pyrran minds, by necessity, run along one track at a time, and at the present moment she was thinking about the descending spaceship. With a quick motion, scarcely aware of her action, she pulled his hands from her and pushed him away, an easy enough thing for a Pyrran girl to do. But in doing so she half fractured one of his wrists, numbed the other, and knocked Jason to the ground.

“Darling … I’m sorry,” she gasped, suddenly realizing what she had done, bending quickly to help him up.

“Get away, you lady weight-lifter,” he growled, pushing aside the proffered hand and struggling to his feet. “When are you going to realize that I’m only human, not made of chrome steel bars like the rest of your people….” He stifled the rest of his words in disgust, at himself, his temper, this deadly planet and the cantankerousness of its citizens that was scratching away at his nerves. He turned and stamped away, angry at himself for taking out his vile mood on Meta, but still too annoyed to make peace.

Meta watched him leave, trying to say something that would end this foolish quarrel, but unable to. The largest blank in the Pyrran personality was an almost complete lack of knowledge of human nature, and her struggle to fill in the gaps–gaps she was only just beginning to realize existed–was a difficult one. The stronger emotions of hate and fear were no strangers to her; but for the first time she was discovering how difficult and complex was this unusual feeling of love. She let Jason go because she was incapable of any other action. Of course she could stop him by force, but if she had learned anything in the past few weeks, it was the discovery that this was one area where he was very sensitive. There was no doubt that she was far stronger than he–physically–and he did not like to be reminded about it. She went back into the ground-control room, almost eager to deal with the impersonal faces of the dials and scopes, material and unchanging entities that posed no conflicting problems.