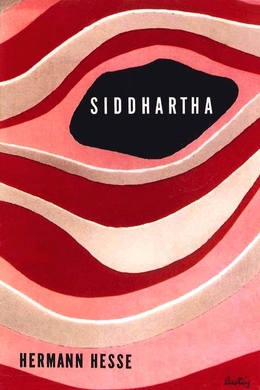 In the novel, Siddhartha, a young man, leaves his family for a contemplative life, then, restless, discards it for one of the flesh. He conceives a son, but bored and sickened by lust and greed, moves on again. Near despair, Siddhartha comes to a river where he hears a unique sound. This sound signals the true beginning of his life – the beginning of suffering, rejection, peace, and, finally, wisdom.

In the shade of the house, in the sunshine of the riverbank near the boats, in the shade of the Sal-wood forest, in the shade of the fig tree is where Siddhartha grew up, the handsome son of the Brahman, the young falcon, together with his friend Govinda, son of a Brahman. The sun tanned his light shoulders by the banks of the river when bathing, performing the sacred ablutions, the sacred offerings. In the mango grove, shade poured into his black eyes, when playing as a boy, when his mother sang, when the sacred offerings were made, when his father, the scholar, taught him, when the wise men talked. For a long time, Siddhartha had been partaking in the discussions of the wise men, practising debate with Govinda, practising with Govinda the art of reflection, the service of meditation. He already knew how to speak the Om silently, the word of words, to speak it silently into himself while inhaling, to speak it silently out of himself while exhaling, with all the concentration of his soul, the forehead surrounded by the glow of the clear-thinking spirit. He already knew to feel Atman in the depths of his being, indestructible, one with the universe.

Joy leapt in his father’s heart for his son who was quick to learn, thirsty for knowledge; he saw him growing up to become great wise man and priest, a prince among the Brahmans.

Love touched the hearts of the Brahmans’ young daughters when Siddhartha walked through the lanes of the town with the luminous forehead, with the eye of a king, with his slim hips.

But more than all the others he was loved by Govinda, his friend, the son of a Brahman. He loved Siddhartha’s eye and sweet voice, he loved his walk and the perfect decency of his movements, he loved everything Siddhartha did and said and what he loved most was his spirit, his transcendent, fiery thoughts, his ardent will, his high calling. Govinda knew: he would not become a common Brahman, not a lazy official in charge of offerings; not a greedy merchant with magic spells; not a vain, vacuous speaker; not a mean, deceitful priest; and also not a decent, stupid sheep in the herd of the many. No, and he, Govinda, as well did not want to become one of those, not one of those tens of thousands of Brahmans. He wanted to follow Siddhartha, the beloved, the splendid. And in days to come, when Siddhartha would become a god, when he would join the glorious, then Govinda wanted to follow him as his friend, his companion, his servant, his spear-carrier, his shadow.

Siddhartha was thus loved by everyone. He was a source of joy for everybody, he was a delight for them all.

But he, Siddhartha, was not a source of joy for himself, he found no delight in himself. Walking the rosy paths of the fig tree garden, sitting in the bluish shade of the grove of contemplation, washing his limbs daily in the bath of repentance, sacrificing in the dim shade of the mango forest, his gestures of perfect decency, everyone’s love and joy, he still lacked all joy in his heart. Dreams and restless thoughts came into his mind, flowing from the water of the river, sparkling from the stars of the night, melting from the beams of the sun, dreams came to him and a restlessness of the soul, fuming from the sacrifices, breathing forth from the verses of the Rig-Veda, being infused into him, drop by drop, from the teachings of the old Brahmans.

Siddhartha had started to nurse discontent in himself, he had started to feel that the love of his father and the love of his mother, and also the love of his friend, Govinda, would not bring him joy for ever and ever, would not nurse him, feed him, satisfy him. He had started to suspect that his venerable father and his other teachers, that the wise Brahmans had already revealed to him the most and best of their wisdom, that they had already filled his expecting vessel with their richness, and the vessel was not full, the spirit was not content, the soul was not calm, the heart was not satisfied. The ablutions were good, but they were water, they did not wash off the sin, they did not heal the spirit’s thirst, they did not relieve the fear in his heart. The sacrifices and the invocation of the gods were excellent–but was that all? Did the sacrifices give a happy fortune? And what about the gods? Was it really Prajapati who had created the world? Was it not the Atman, He, the only one, the singular one? Were the gods not creations, created like me and you, subject to time, mortal? Was it therefore good, was it right, was it meaningful and the highest occupation to make offerings to the gods?