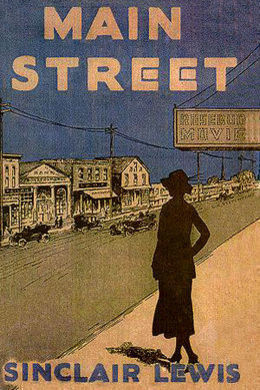 In this classic, Sinclair Lewis shattered the sentimental American myth of happy small-town life with its satire. Main Street attacks the conformity and dullness of early 20th Century mid western village life in the story of Carol Milford, the city girl who marries the town doctor. Her efforts to bring culture to the prairie village are met by a wall of gossip, greed, and petty small-minded bigotry.

On a hill by the Mississippi where Chippewas camped two generations ago, a girl stood in relief against the cornflower blue of Northern sky. She saw no Indians now; she saw flour-mills and the blinking windows of skyscrapers in Minneapolis and St. Paul. Nor was she thinking of squaws and portages, and the Yankee fur-traders whose shadows were all about her. She was meditating upon walnut fudge, the plays of Brieux, the reasons why heels run over, and the fact that the chemistry instructor had stared at the new coiffure which concealed her ears.

A breeze which had crossed a thousand miles of wheat-lands bellied her taffeta skirt in a line so graceful, so full of animation and moving beauty, that the heart of a chance watcher on the lower road tightened to wistfulness over her quality of suspended freedom. She lifted her arms, she leaned back against the wind, her skirt dipped and flared, a lock blew wild. A girl on a hilltop; credulous, plastic, young; drinking the air as she longed to drink life. The eternal aching comedy of expectant youth.

It is Carol Milford, fleeing for an hour from Blodgett College.

The days of pioneering, of lassies in sunbonnets, and bears killed with axes in piney clearings, are deader now than Camelot; and a rebellious girl is the spirit of that bewildered empire called the American Middlewest.

Blodgett College is on the edge of Minneapolis. It is a bulwark of sound religion. It is still combating the recent heresies of Voltaire, Darwin, and Robert Ingersoll. Pious families in Minnesota, Iowa, Wisconsin, the Dakotas send their children thither, and Blodgett protects them from the wickedness of the universities. But it secretes friendly girls, young men who sing, and one lady instructress who really likes Milton and Carlyle. So the four years which Carol spent at Blodgett were not altogether wasted. The smallness of the school, the fewness of rivals, permitted her to experiment with her perilous versatility. She played tennis, gave chafing-dish parties, took a graduate seminar in the drama, went “twosing,” and joined half a dozen societies for the practise of the arts or the tense stalking of a thing called General Culture.

In her class there were two or three prettier girls, but none more eager. She was noticeable equally in the classroom grind and at dances, though out of the three hundred students of Blodgett, scores recited more accurately and dozens Bostoned more smoothly. Every cell of her body was alive–thin wrists, quince-blossom skin, ingenue eyes, black hair.

The other girls in her dormitory marveled at the slightness of her body when they saw her in sheer negligee, or darting out wet from a shower-bath. She seemed then but half as large as they had supposed; a fragile child who must be cloaked with understanding kindness. “Psychic,” the girls whispered, and “spiritual.” Yet so radioactive were her nerves, so adventurous her trust in rather vaguely conceived sweetness and light, that she was more energetic than any of the hulking young women who, with calves bulging in heavy-ribbed woolen stockings beneath decorous blue serge bloomers, thuddingly galloped across the floor of the “gym” in practise for the Blodgett Ladies’ Basket-Ball Team.

Even when she was tired her dark eyes were observant. She did not yet know the immense ability of the world to be casually cruel and proudly dull, but if she should ever learn those dismaying powers, her eyes would never become sullen or heavy or rheumily amorous.

For all her enthusiasms, for all the fondness and the “crushes” which she inspired, Carol’s acquaintances were shy of her. When she was most ardently singing hymns or planning deviltry she yet seemed gently aloof and critical. She was credulous, perhaps; a born hero-worshipper; yet she did question and examine unceasingly. Whatever she might become she would never be static.

Her versatility ensnared her. By turns she hoped to discover that she had an unusual voice, a talent for the piano, the ability to act, to write, to manage organizations. Always she was disappointed, but always she effervesced anew–over the Student Volunteers, who intended to become missionaries, over painting scenery for the dramatic club, over soliciting advertisements for the college magazine.

She was on the peak that Sunday afternoon when she played in chapel. Out of the dusk her violin took up the organ theme, and the candle-light revealed her in a straight golden frock, her arm arched to the bow, her lips serious. Every man fell in love then with religion and Carol.

Throughout Senior year she anxiously related all her experiments and partial successes to a career. Daily, on the library steps or in the hall of the Main Building, the co-eds talked of “What shall we do when we finish college?”