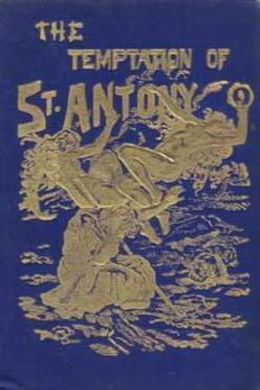 The Temptation of St. Antony

A Revelation of the Soul

The Temptation of St. Antony is based on the story of the third-century saint who lived on an isolated mountaintop in the Egyptian desert. Saint Anthony, while living in the desert, remembers former temptations and is beset by the onslaught of philosophic doubt.

It is in the Thebaïd, on the heights of a mountain, where a platform, shaped like a crescent, is surrounded by huge stones.

The Hermit’s cell occupies the background. It is built of mud and reeds, flat-roofed and doorless. Inside are seen a pitcher and a loaf of black bread; in the centre, on a wooden support, a large book; on the ground, here and there, bits of rush-work, a mat or two, a basket and a knife.

Some ten paces or so from the cell a tall cross is planted in the ground; and, at the other end of the platform, a gnarled old palm-tree leans over the abyss, for the side of the mountain is scarped; and at the bottom of the cliff the Nile swells, as it were, into a lake.

To right and left, the view is bounded by the enclosing rocks; but, on the side of the desert, immense undulations of a yellowish ash-colour rise, one above and one beyond the other, like the lines of a sea-coast; while, far off, beyond the sands, the mountains of the Libyan range form a wall of chalk-like whiteness faintly shaded with violet haze. In front, the sun is going down. Towards the north, the sky has a pearl-grey tint; while, at the zenith, purple clouds, like the tufts of a gigantic mane, stretch over the blue vault. These purple streaks grow browner; the patches of blue assume the paleness of mother-of-pearl. The bushes, the pebbles, the earth, now wear the hard colour of bronze, and through space floats a golden dust so fine that it is scarcely distinguishable from the vibrations of light.

Saint Antony, who has a long beard, unshorn locks, and a tunic of goatskin, is seated, cross-legged, engaged in making mats. No sooner has the sun disappeared than he heaves a deep sigh, and gazing towards the horizon:

“Another day! Another day gone! I was not so miserable in former times as I am now! Before the night was over, I used to begin my prayers; then I would go down to the river to fetch water, and would reascend the rough mountain pathway, singing a hymn, with the water-bottle on my shoulder. After that, I used to amuse myself by arranging everything in my cell. I used to take up my tools, and examine the mats, to see whether they were evenly cut, and the baskets, to see whether they were light; for it seemed to me then that even my most trifling acts were duties which I performed with ease. At regulated hours I left off my work and prayed, with my two arms extended. I felt as if a fountain of mercy were flowing from Heaven above into my heart. But now it is dried up. Why is this? …”

He proceeds slowly into the rocky enclosure.

“When I left home, everyone found fault with me. My mother sank into a dying state; my sister, from a distance, made signs to me to come back; and the other one wept, Ammonaria, that child whom I used to meet every evening, beside the cistern, as she was leading away her cattle. She ran after me. The rings on her feet glittered in the dust, and her tunic, open at the hips, fluttered in the wind. The old ascetic who hurried me from the spot addressed her, as we fled, in loud and menacing tones. Then our two camels kept galloping continuously, till at length every familiar object had vanished from my sight.

“At first, I selected for my abode the tomb of one of the Pharaohs. But some enchantment surrounds those subterranean palaces, amid whose gloom the air is stifled with the decayed odour of aromatics. From the depths of the sarcophagi I heard a mournful voice arise, that called me by name–or rather, as it seemed to me, all the fearful pictures on the walls started into hideous life. Then I fled to the borders of the Red Sea into a citadel in ruins. There I had for companions the scorpions that crawled amongst the stones, and, overhead, the eagles who were continually whirling across the azure sky. At night, I was torn by talons, bitten by beaks, or brushed with light wings; and horrible demons, yelling in my ears, hurled me to the earth. At last, the drivers of a caravan, which was journeying towards Alexandria, rescued me, and carried me along with them.

“After this, I became a pupil of the venerable Didymus. Though he was blind, no one equalled him in knowledge of the Scriptures. When our lesson was ended, he used to take my arm, and, with my aid, ascend the Panium, from whose summit could be seen the Pharos and the open sea. Then we would return home, passing along the quays, where we brushed against men of every nation, including the Cimmerians, clad in bearskin, and the Gymnosophists of the Ganges, who smear their bodies with cow-dung. There were continual conflicts in the streets, some of which were caused by the Jews’ refusal to pay taxes, and others by the attempts of the seditious to drive out the Romans.