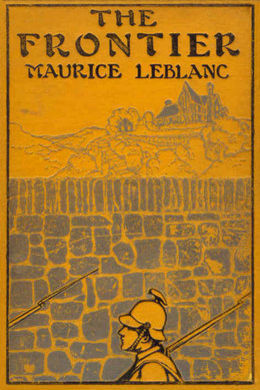 “The Frontier” is that old idea of the conflict between the old and the new, between fathers and sons, between the intense convictions of yesterday and to-morrow. The form which Le Blanc recreates it is that of the conflict between devotion to country and devotion to that latest ideal, world-wide Peace. The father is a rugged old French patriot who fought in the war with Germany, whose heart is still bitter, and whose hate flames quickly at the thought of Alsace and Lorraine. The son is a professor of history whose studies have taught him how vain are bloodshed and violence. The scene is at the father’s home, on the frontier, and he himself precipitates the war between France and Germany that comes crashing along in the last few chapters like a thunderstorm out of a Summer sky. Woven in with this intense and agonizing emotional drama that goes on between father and son. and woven so cleverly that the very doing of it excites one’s admiration, Is one of those fateful outbursts of elemental human passion which French novelists are accustomed to present as matters of course.

Old Morestal stepped aside. His wife came out of the drawing-room and went and stood by the telescope, on its tripod, at the end of the terrace.

“I can see nothing,” she said, presently.

“Don’t you see a tree standing out above the others, with lighter foliage?”

“And, to the right of that tree, a little lower down, an empty space surrounded by fir-trees?”

“That’s the circus of the Butte-aux-Loups and it marks the frontier at that spot.”

“Ah, I’ve got it!… There it is!… You mean on the ground, don’t you? Lying flat on the grass, exactly as if it had been rooted up by last night’s storm….”

“What are you talking about? It has been fairly felled with an axe: you can see the gash from here.”

She stood up and shook her head:

“That makes the third time this year…. It will mean more unpleasantness.”

“Fiddle-de-dee!” he exclaimed. “All they’ve got to do is to put up a solid post, instead of their old bit of wood.” And he added, in a tone of pride, “The French post, two yards off, doesn’t budge, you know!”

“Well, of course not! It’s made of cast-iron and cemented into the stone.”

“Let them do as much then! It’s not money they’re wanting … when you think of the five thousand millions they robbed us of!… No, but, I say … three of them in eight months!… How will the people take it, on the other side of the Vosges?”

He could not hide the sort of gay and sarcastic feeling of content that filled his whole being and he walked up and down the terrace, stamping his feet as hard as he could on the ground.

But, suddenly going to his wife, he seized her by the arm and said, in a hollow voice:

“Would you like to know what I really think?”

“Well, all this will lead to trouble.”

She turned away from him and went back to the drawing-room again, where she began to dust the furniture with a feather-broom.

He shrugged his shoulders, as he followed her indoors:

“Oh, yes, you’re the placid mother, of course! Nothing excites you. As long as your cupboards are tidy, your linen all complete and your jams potted, you don’t care!… Still, you ought not to forget that they killed your poor father.”

“It was yesterday,” he said, sinking his voice, “yesterday, no longer ago than yesterday….”

“Ah, there’s the postman!” she said, hurrying to change the conversation.

She heard a heavy footstep outside the windows opening on the garden. There was a rap at the knocker on the front-door. A minute later, Victor, the man-servant, brought in the letters.

“Oh!” said Mme. Morestal. “A letter from the boy…. Open it, will you? I haven’t my spectacles…. I expect it’s to say that he will arrive this evening: he was to have left Paris this morning.”

“Not at all!” cried M. Morestal, glancing over the letter. “Philippe and his wife have taken their two boys to some friends at Versailles and started with the intention of sleeping last night at the Ballon de Colnard, seeing the sunrise and doing the rest of the journey on foot, with their knapsacks on their backs. They will be here by twelve.”

She at once lost her head:

“And the storm! What about last night’s storm?”

“My son doesn’t care about the storm! It won’t be the first that the fellow’s been through. It’s eleven o’clock. He will be with us in an hour.”

“But that will never do! There’s nothing ready for them!”

She at once went to work, like the active little old woman that she was, a little too fat, a little tired, but wide-awake still and so methodical, so orderly in her ways that she never made a superfluous movement or one that was not calculated to bring her an immediate advantage.

As for him, he resumed his walk between the terrace and the drawing-room. He strode with long, even steps, holding his body erect, his chest flung out and his hands in the pockets of his jacket, a blue-drill gardening-jacket, with the point of a pruning-shears and the stem of a pipe sticking out of it. He was tall and broad-shouldered; and his fresh-coloured face seemed young still, in spite of the fringe of white beard in which it was framed.