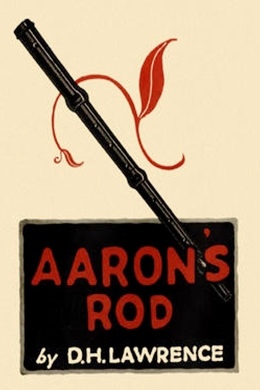 Lawrence’s satirical work in which he presents a bitter view of humanity and of the relationship between men and women. Aaron Sisson, a union official in an English mining town, leaves for Italy, deserting his wife and children to pursue politics and his original interest in music. Lawrence seems to foretell the decline of civilization after the first world war.

There was a large, brilliant evening star in the early twilight, and underfoot the earth was half frozen. It was Christmas Eve. Also the War was over, and there was a sense of relief that was almost a new menace. A man felt the violence of the nightmare released now into the general air. Also there had been another wrangle among the men on the pit-bank that evening.

Aaron Sisson was the last man on the little black railway-line climbing the hill home from work. He was late because he had attended a meeting of the men on the bank. He was secretary to the Miners Union for his colliery, and had heard a good deal of silly wrangling that left him nettled.

He strode over a stile, crossed two fields, strode another stile, and was in the long road of colliers’ dwellings. Just across was his own house: he had built it himself. He went through the little gate, up past the side of the house to the back. There he hung a moment, glancing down the dark, wintry garden.

“My father–my father’s come!” cried a child’s excited voice, and two little girls in white pinafores ran out in front of his legs.

“Father, shall you set the Christmas Tree?” they cried. “We’ve got one!”

“Afore I have my dinner?” he answered amiably.

“Set it now. Set it now.–We got it through Fred Alton.”

The little girls were dragging a rough, dark object out of a corner of the passage into the light of the kitchen door.

“I should think so,” he replied, striding over the dark bough. He went to the back kitchen to take off his coat.

“Set it now, Father. Set it now,” clamoured the girls.

“You might as well. You’ve left your dinner so long, you might as well do it now before you have it,” came a woman’s plangent voice, out of the brilliant light of the middle room.

Aaron Sisson had taken off his coat and waistcoat and his cap. He stood bare-headed in his shirt and braces, contemplating the tree.

“What am I to put it in?” he queried. He picked up the tree, and held it erect by the topmost twig. He felt the cold as he stood in the yard coatless, and he twitched his shoulders.

“Isn’t it a beauty!” repeated Millicent.

“Put something on, you two!” came the woman’s high imperative voice, from the kitchen.

“We aren’t cold,” protested the girls from the yard.

“Come and put something on,” insisted the voice. The man started off down the path, the little girls ran grumbling indoors. The sky was clear, there was still a crystalline, non-luminous light in the under air.

Aaron rummaged in his shed at the bottom of the garden, and found a spade and a box that was suitable. Then he came out to his neat, bare, wintry garden. The girls flew towards him, putting the elastic of their hats under their chins as they ran. The tree and the box lay on the frozen earth. The air breathed dark, frosty, electric.

“Hold it up straight,” he said to Millicent, as he arranged the tree in the box. She stood silent and held the top bough, he filled in round the roots.

When it was done, and pressed in, he went for the wheelbarrow. The girls were hovering excited round the tree. He dropped the barrow and stooped to the box. The girls watched him hold back his face–the boughs pricked him.

“Is it very heavy?” asked Millicent.

“Ay!” he replied, with a little grunt. Then the procession set off–the trundling wheel-barrow, the swinging hissing tree, the two excited little girls. They arrived at the door. Down went the legs of the wheel-barrow on the yard. The man looked at the box.

“Where are you going to have it?” he called.

“Put it in the back kitchen,” cried his wife.

“You’d better have it where it’s going to stop. I don’t want to hawk it about.”

“Put it on the floor against the dresser, Father. Put it there,” urged Millicent.

“You come and put some paper down, then,” called the mother hastily.

The two children ran indoors, the man stood contemplative in the cold, shrugging his uncovered shoulders slightly. The open inner door showed a bright linoleum on the floor, and the end of a brown side-board on which stood an aspidistra.

Again with a wrench Aaron Sisson lifted the box. The tree pricked and stung. His wife watched him as he entered staggering, with his face averted.

“Mind where you make a lot of dirt,” she said.

He lowered the box with a little jerk on to the spread-out newspaper on the floor. Soil scattered.

“Sweep it up,” he said to Millicent.

His ear was lingering over the sudden, clutching hiss of the tree-boughs.