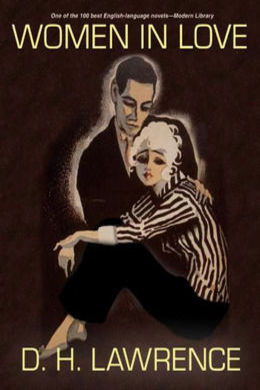 A sequel to Lawrence’s earlier novel The Rainbow, it continues the story of the Brangwen sisters in the coal-mining town of Beldover. Based in part on Lawrence’s own stormy marriage to German aristocrat Frieda von Richthofen, the tale is charged with intense feelings and psychological insights as it focuses on the relationships of the two sisters–Ursula, who deeply loves and eventually marries a school inspector; and Gudrun, who is attracted to the son of a wealthy industrialist but, who, in time, finds only emptiness in their association.

Ursula and Gudrun Brangwen sat one morning in the window-bay of their father’s house in Beldover, working and talking. Ursula was stitching a piece of brightly-coloured embroidery, and Gudrun was drawing upon a board which she held on her knee. They were mostly silent, talking as their thoughts strayed through their minds.

‘Ursula,’ said Gudrun, ‘don’t you really want to get married?’ Ursula#laid her embroidery in her lap and looked up. Her face was calm and considerate.

Gudrun was slightly taken aback. She watched her sister for some moments.

‘Well,’ she said, ironically, ‘it usually means one thing! But don’t you think anyhow, you’d be–’ she darkened slightly–‘in a better position than you are in now.’

A shadow came over Ursula’s face.

Again Gudrun paused, slightly irritated. She wanted to be quite definite.

‘You don’t think one needs the experience of having been married?’ she asked.

‘Do you think it need be an experience?’ replied Ursula.

‘Bound to be, in some way or other,’ said Gudrun, coolly. ‘Possibly undesirable, but bound to be an experience of some sort.’

‘Not really,’ said Ursula. ‘More likely to be the end of experience.’

Gudrun sat very still, to attend to this.

‘Of course,’ she said, ‘there’s THAT to consider.’ This brought the conversation to a close. Gudrun, almost angrily, took up her rubber and began to rub out part of her drawing. Ursula stitched absorbedly.

‘REALLY!’ Gudrun flushed dark–‘But anything really worth while? Have you really?’

‘A thousand a year, and an awfully nice man. I liked him awfully,’ said Ursula.

‘Really! But weren’t you fearfully tempted?’

‘In the abstract but not in the concrete,’ said Ursula. ‘When it comes to the point, one isn’t even tempted–oh, if I were tempted, I’d marry like a shot. I’m only tempted not to.’ The faces of both sisters suddenly lit up with amusement.

‘Isn’t it an amazing thing,’ cried Gudrun, ‘how strong the temptation is, not to!’ They both laughed, looking at each other. In their hearts they were frightened.

There was a long pause, whilst Ursula stitched and Gudrun went on with her sketch. The sisters were women, Ursula twenty-six, and Gudrun twenty-five. But both had the remote, virgin look of modern girls, sisters of Artemis rather than of Hebe. Gudrun was very beautiful, passive, soft-skinned, soft-limbed. She wore a dress of dark-blue silky stuff, with ruches of blue and green linen lace in the neck and sleeves; and she had emerald-green stockings. Her look of confidence and diffidence contrasted with Ursula’s sensitive expectancy. The provincial people, intimidated by Gudrun’s perfect sang-froid and exclusive bareness of manner, said of her: ‘She is a smart woman.’ She had just come back from London, where she had spent several years, working at an art-school, as a student, and living a studio life.

‘I was hoping now for a man to come along,’ Gudrun said, suddenly catching her underlip between her teeth, and making a strange grimace, half sly smiling, half anguish. Ursula was afraid.

‘So you have come home, expecting him here?’ she laughed.

‘Oh my dear,’ cried Gudrun, strident, ‘I wouldn’t go out of my way to look for him. But if there did happen to come along a highly attractive individual of sufficient means–well–’ she tailed off ironically. Then she looked searchingly at Ursula, as if to probe her. ‘Don’t you find yourself getting bored?’ she asked of her sister. ‘Don’t you find, that things fail to materialise? Nothing materialises! Everything withers in the bud.’

‘What withers in the bud?’ asked Ursula.

‘Oh, everything–oneself–things in general.’ There was a pause, whilst each sister vaguely considered her fate.

‘It does frighten one,’ said Ursula, and again there was a pause. ‘But do you hope to get anywhere by just marrying?’

‘It seems to be the inevitable next step,’ said Gudrun. Ursula pondered this, with a little bitterness. She was a class mistress herself, in Willey Green Grammar School, as she had been for some years.

‘I know,’ she said, ‘it seems like that when one thinks in the abstract. But really imagine it: imagine any man one knows, imagine him coming home to one every evening, and saying “Hello,” and giving one a kiss–’

There was a blank pause.