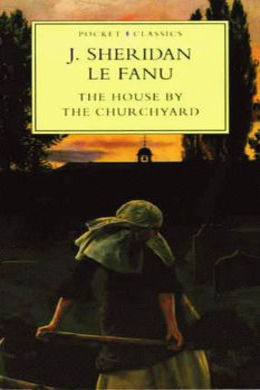 The House by the Churchyard

Set in the village of Chapelizod, near Dublin, in the 1760s the story opens with the accidental disinterment of an old skull in the churchyard, and an eerie late-night funeral. This discovery relates to murders, both recent and historical whose repercussions disrupt the complacent pace of village affairs and change the lives of many of its notable characters forever. Charm and chilling darkness abound in equal measure in one of the greatest novels of a Victorian master of mystery.

I believe there was no moon, and the stars had been quite put out under the wet ‘blanket of the night,’ which impenetrable muffler overspread the sky with a funereal darkness.

There was a little of that sheet-lightning early in the evening, which betokens sultry weather. The clouds, column after column, came up sullenly over the Dublin mountains, rolling themselves from one horizon to the other into one black dome of vapour, their slow but steady motion contrasting with the awful stillness of the air. There was a weight in the atmosphere, and a sort of undefined menace brooding over the little town, as if unseen crime or danger–some mystery of iniquity–was stealing into the heart of it, and the disapproving heavens scowled a melancholy warning.

That morning old Sally, the rector’s housekeeper, was disquieted. She had dreamed of making the great four-post, state bed, with the dark green damask curtains–a dream that betokened some coming trouble–it might, to be sure, be ever so small–(it had once come with no worse result than Dr. Walsingham’s dropping his purse, containing something under a guinea in silver, over the side of the ferry boat)–but again it might be tremendous. The omen hung over them doubtful.

A large square letter, with a great round seal, as big as a crown piece, addressed to the Rev. Hugh Walsingham, Doctor of Divinity, at his house, by the bridge, in Chapelizod, had reached him in the morning, and plainly troubled him. He kept the messenger a good hour awaiting his answer; and, just at two o’clock, the same messenger returned with a second letter–but this time a note sufficed for reply. ‘‘Twill seem ungracious,’ said the doctor, knitting his brows over his closed folio in the study; ‘but I cannot choose but walk clear in my calling before the Lord. How can I honestly pronounce hope, when in my mind there is nothing but fear–let another do it if he see his way–I do enough in being present, as ‘tis right I should.’

It was, indeed, a remarkably dark night–a rush and downpour of rain! The doctor stood just under the porch of the stout brick house–of King William’s date, which was then the residence of the worthy rector of Chapelizod–with his great surtout and cape on–his leggings buttoned up–and his capacious leather ‘overalls’ pulled up and strapped over these–and his broad-leafed hat tied down over his wig and ears with a mighty silk kerchief. I dare say he looked absurd enough–but it was the women’s doing–who always, upon emergencies, took the doctor’s wardrobe in hand. Old Sally, with her kind, mild, grave face, and gray locks, stood modestly behind in the hall; and pretty Lilias, his only child, gave him her parting kiss, and her last grand charge about his shoes and other exterior toggery, in the porch; and he patted her cheek with a little fond laugh, taking old John Tracy’s, the butler’s, arm. John carried a handsome horn-lantern, which flashed now on a roadside bush–now on the discoloured battlements of the bridge–and now on a streaming window. They stepped out–there were no umbrellas in those days–splashing among the wide and widening pools; while Sally and Lilias stood in the porch, holding candles for full five minutes after the doctor and his ‘Jack-o’-the-lantern,’ as he called honest John, whose arm and candle always befriended him in his night excursions, had got round the corner.

Through the back bow-window of the Phoenix, there pealed forth–faint in the distance and rain–a solemn royal ditty, piped by the tuneful Aldermen of Skinner’s Alley, and neither unmusical nor somehow uncongenial with the darkness, and the melancholy object of the doctor’s walk, the chant being rather monastic, wild, and dirge-like. It was a quarter past ten, and no other sound of life or human neighbourhood was stirring. If secrecy were an object, it was well secured by the sable sky, and the steady torrent which rolled down with electric weight and perpendicularity, making all nature resound with one long hush–sh–sh–sh–sh–deluging the broad street, and turning the channels and gutters into mimic mill-streams which snorted and hurtled headlong through their uneven beds, and round the corners towards the turbid Liffey, which, battered all over with rain, muddy, and sullen, reeled its way towards the sea, rolling up to the heavens an aspect black as their own.

As they passed by the Phoenix (a little rivulet, by-the-bye, was spouting down from the corner of the sign; and indeed the night was such as might well have caused that suicidal fowl to abandon all thoughts of self-incremation, and submit to an unprecedented death by drowning), there was no idle officer, or lounging waiter upon the threshold.