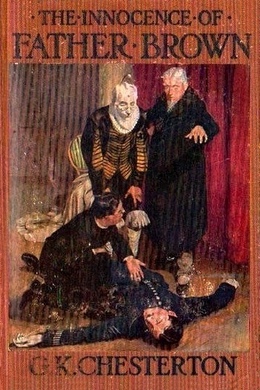 The Innocence of Father Brown

The first book of G.K. Chesterton’s ingenious, thoughtful, and lyrically written mystery stories featuring the unassuming little priest who solves crimes by imagining himself inside the mind and soul of criminals, thus understanding their motives. The stories are full of paradox, spiritual insight, and “Chestertonian fantasy”, or seeing the extraordinary in the ordinary. Father Brown is a direct challenge to the conventional detective and in many ways he is more amusing and ingenious.

Between the silver ribbon of morning and the green glittering ribbon of sea, the boat touched Harwich and let loose a swarm of folk like flies, among whom the man we must follow was by no means conspicuous–nor wished to be. There was nothing notable about him, except a slight contrast between the holiday gaiety of his clothes and the official gravity of his face. His clothes included a slight, pale grey jacket, a white waistcoat, and a silver straw hat with a grey-blue ribbon. His lean face was dark by contrast, and ended in a curt black beard that looked Spanish and suggested an Elizabethan ruff. He was smoking a cigarette with the seriousness of an idler. There was nothing about him to indicate the fact that the grey jacket covered a loaded revolver, that the white waistcoat covered a police card, or that the straw hat covered one of the most powerful intellects in Europe. For this was Valentin himself, the head of the Paris police and the most famous investigator of the world; and he was coming from Brussels to London to make the greatest arrest of the century.

Flambeau was in England. The police of three countries had tracked the great criminal at last from Ghent to Brussels, from Brussels to the Hook of Holland; and it was conjectured that he would take some advantage of the unfamiliarity and confusion of the Eucharistic Congress, then taking place in London. Probably he would travel as some minor clerk or secretary connected with it; but, of course, Valentin could not be certain; nobody could be certain about Flambeau.

It is many years now since this colossus of crime suddenly ceased keeping the world in a turmoil; and when he ceased, as they said after the death of Roland, there was a great quiet upon the earth. But in his best days (I mean, of course, his worst) Flambeau was a figure as statuesque and international as the Kaiser. Almost every morning the daily paper announced that he had escaped the consequences of one extraordinary crime by committing another. He was a Gascon of gigantic stature and bodily daring; and the wildest tales were told of his outbursts of athletic humour; how he turned the juge d’instruction upside down and stood him on his head, “to clear his mind”; how he ran down the Rue de Rivoli with a policeman under each arm. It is due to him to say that his fantastic physical strength was generally employed in such bloodless though undignified scenes; his real crimes were chiefly those of ingenious and wholesale robbery. But each of his thefts was almost a new sin, and would make a story by itself. It was he who ran the great Tyrolean Dairy Company in London, with no dairies, no cows, no carts, no milk, but with some thousand subscribers. These he served by the simple operation of moving the little milk cans outside people’s doors to the doors of his own customers. It was he who had kept up an unaccountable and close correspondence with a young lady whose whole letter-bag was intercepted, by the extraordinary trick of photographing his messages infinitesimally small upon the slides of a microscope. A sweeping simplicity, however, marked many of his experiments. It is said that he once repainted all the numbers in a street in the dead of night merely to divert one traveller into a trap. It is quite certain that he invented a portable pillar-box, which he put up at corners in quiet suburbs on the chance of strangers dropping postal orders into it. Lastly, he was known to be a startling acrobat; despite his huge figure, he could leap like a grasshopper and melt into the tree-tops like a monkey. Hence the great Valentin, when he set out to find Flambeau, was perfectly aware that his adventures would not end when he had found him.

But how was he to find him? On this the great Valentin’s ideas were still in process of settlement.

There was one thing which Flambeau, with all his dexterity of disguise, could not cover, and that was his singular height. If Valentin’s quick eye had caught a tall apple-woman, a tall grenadier, or even a tolerably tall duchess, he might have arrested them on the spot. But all along his train there was nobody that could be a disguised Flambeau, any more than a cat could be a disguised giraffe. About the people on the boat he had already satisfied himself; and the people picked up at Harwich or on the journey limited themselves with certainty to six. There was a short railway official travelling up to the terminus, three fairly short market gardeners picked up two stations afterwards, one very short widow lady going up from a small Essex town, and a very short Roman Catholic priest going up from a small Essex village. When it came to the last case, Valentin gave it up and almost laughed. The little priest was so much the essence of those Eastern flats; he had a face as round and dull as a Norfolk dumpling; he had eyes as empty as the North Sea; he had several brown paper parcels, which he was quite incapable of collecting.